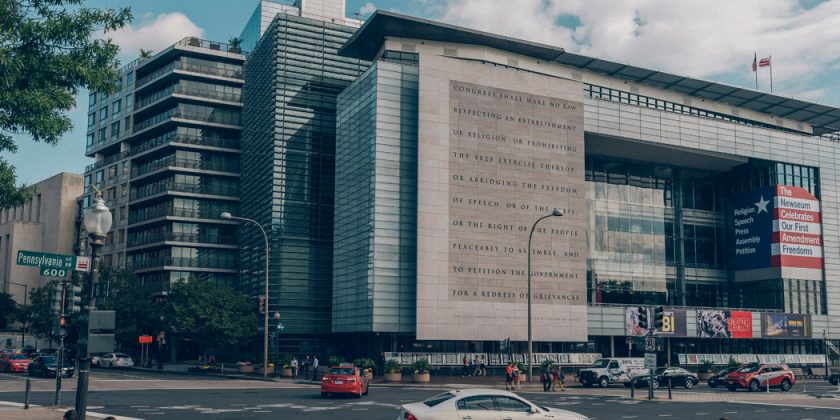 The building that houses the Newseum — the financially troubled monument to journalism in Washington — is being sold to Johns Hopkins University for $372.5 million by the Freedom Forum, the foundation that created the museum.

The institution will remain open through 2019 and museum executives will spend that time trying to find a new space for its contents.

“This was a difficult decision, but it was the responsible one,” Jan Neuharth, the chairwoman and chief executive of the Freedom Forum, said in a statement released Friday. “We remain committed to continuing our programs — in a financially sustainable way — to champion the five freedoms of the First Amendment and to increase public awareness about the importance of a free and fair press. With today’s announcement, we can begin to explore all options to find a new home in the Washington, D.C., area.”

For Johns Hopkins, the purchase will allow the university to expand and consolidate its presence in the nation’s capital.

The university said in a statement that, “anchored by the School of Advanced International Studies, Johns Hopkins’ expanded presence in Washington, D.C., will increase our capacity to convene and inform decision makers, contribute to national and international policy development and forge exciting new connections to our home city of Baltimore.”

The decision to sell came after a 16-month review that left the museum’s future unclear. The Newseum has struggled financially ever since it moved from Rosslyn, Va. where it originally opened in 1997, to its opulent Pennsylvania Avenue location in 2008. It ran up deficits every year and has hundreds of millions of dollars of debt resulting from the purchase of the building. In 2017, the most recent year for which numbers are publicly available, the museum had a deficit of roughly $5 million.

The Freedom Forum has been the primary backer of the Newseum, having donated $600 million over the last two decades. But its endowment has shrunk and the Freedom Forum made clear in recent years that it could not support the museum in the same way. In 2007, the Freedom Forum’s endowment was approximately $550 million. In 2009, in the Newseum’s first full year of operation in the new space, it dipped to below $400 million. More than a decade later, the endowment remains about the same.

Opening amid a recession that hammered newsrooms across the country didn’t help. Alternate revenue streams, like the $24.95 admission cost and renting out space in the building, weren’t enough.

According to the Newseum, it set out to find a partner that would allow it to remain in the building, which the Freedom Forum built for $450 million. But conversations with philanthropists didn’t pan out. Museum officials then tried to find a way to share the space in the seven-story building, through lease buybacks and other avenues. Ultimately, though, the museum said it found that selling the building was the only path forward.

“We stand ready to continue much of the Newseum’s important work for decades to come — through digital outreach, traveling exhibits and web-based programs in schools around the world, as well as hopefully in a new physical home in the area,” Peter Prichard, chairman of the Newseum’s board of trustees, said in a statement, hinting at what the institution’s future looked like.

On the same day that the museum made its announcement, BuzzFeed began the process of laying off hundreds of staffers, including several high-profile reporters. This was in addition to cuts this week at Verizon Media Group, which includes Yahoo, AOL and HuffPost, and Gannett.

Last August, the Newseum faced fierce criticism from journalists after it was discovered that T-shirts reading “You Are Very Fake News” were being sold in the gift shop. The museum apologized and pulled the merchandise.

Weeks later — unrelated to the T-shirts — Scott Williams, the president and chief operating officer, announced he would be leaving the museum to be closer to family in Tennessee.

As for the large tablet that has the First Amendment etched on it on a facade of the building, it will likely not remain once Johns Hopkins moves in. It is considered property of the museum, not the space.