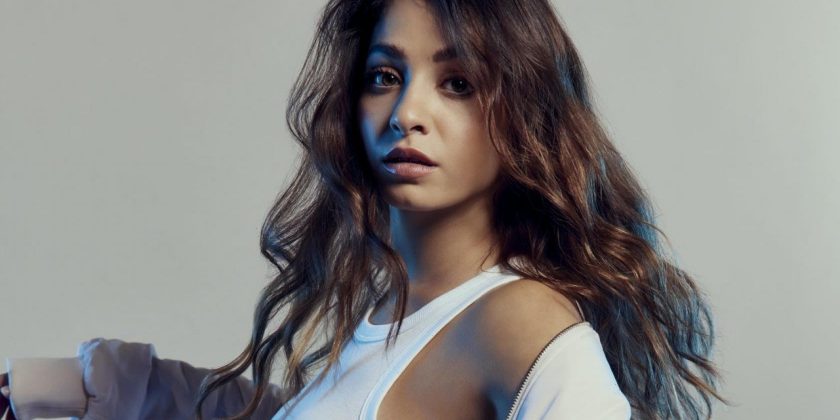 Ahead of the release of Netflix’s The Swimmers, Stylist caught up with Yusra Mardini, whose incredible journey from Syria to the Rio Olympics we follow in the biopic.

Olympic swimmer Yusra Mardini has told her story a million times. First to the press as she competed in the Olympics’ first ever refugee team in Rio 2016. Then in her 2018 autobiography, Butterfly.

Now, Yusra’s story is hitting the small screen. In drama The Swimmers, premiering on Netflix this week, we follow Yusra and her sister Sara, played by real-life sisters Nathalie and Manal Issa respectively, as they leave war-torn Syria to find safety in Germany.

Just as it is for most refugees, the journey was perilous. After flying to Turkey, the sisters boarded a boat to be smuggled into Greece along with 18 other refugees. The boat, which was only meant to hold seven people, began to sink after the motor failed somewhere in the Aegean Sea.

Already strong swimmers, Yusra and Sara, along with two other passengers, jumped into the freezing water to swim alongside the dinghy for over three hours to reduce the weight on board.

Once on land, the group walked through Europe to reach their final destinations, fighting to keep themselves safe along the way.

Watch the trailer for The Swimmers below:

Despite repeating her story countless times, Yusra says that she’ll keep doing it to raise awareness of the plight of refugees. It’s what led to her to become the UN Refugee Agency’s youngest ever Goodwill Ambassador, inspiring political changemakers and thousands around the world.

Stylist sat down with Yusra ahead of the film’s release to talk about her hopes for The Swimmers, why she’ll always be a proud refugee, and her unbreakable bond with her sister.

What was it like bringing your story to the screen with The Swimmers? You’ve spoken to so many already, but a Netflix film will bring attention from a whole new audience.

It was exciting to be approached by [production company] Working Title Films. I loved other films that they’ve made, like Bridget Jones, Love Actually and Notting Hill. They reached out a while ago, but at the time I wasn’t interested. I was an athlete at the Olympics and I wanted to enjoy the moment.

When I finally met the team, I immediately felt very comfortable. They wanted to make an impact, not just any old entertainment movie. I was afraid there’d be lots of fiction, but it’s really authentic. You see the refugee story and a sweet and human side of us living in Syria. You see my amazing coach in Germany, and the bond between me and my sister, and how she started to feel like ‘the sister of.’ Nathalie and Manal have an amazing bond, and that was important. You see our cousin, Nizar, become depressed when we’re in Germany as he struggled to get his papers, saying, “If you’re not the Mardini sisters, you don’t get anywhere here.”

And some of the people who played refugees in the boat scene are actual refugees, too; it was very brave of them to relive that.

The Swimmers tells the remarkable story of Yusra and Sarah Mardini.

Did you feel like you were watching your own story, or a film more removed from your own life?

It did feel like I was watching my story. My sister and I were like, “We went through a lot.” You don’t wake up everyday and think about what happened three years ago, you think about what’s gonna happen in the future. Obviously you sometimes revisit those memories, but because I talk to the media a lot I never think about it in my private time.

I was very proud of how we did not give up, as cheesy as it sounds. I always had my sister’s back and she had mine, even after we drifted apart after the Olympics. It wasn’t easy for her that I went to the Olympics and she didn’t. But what she’s done with her volunteering, even going to jail for it, I think of her as very brave. She does the most important thing, which is advocating for refugees. I need to thank producer Sally El Hosaini for reminding me how much I love my sister. We weren’t raised to be lovey-dovey – we’re very Arabic – so we’re only just starting to say, ‘I love you.’

The film really humanises the refugee story, especially in the scene where you see life jackets from the thousands of refugees who have reached the Greek shoreline.

That’s a real place. Unfortunately they can’t get rid of the lifejackets because they’re bad for the environment, so NGOs are using those materials to make phone cases, bracelets and things to bring awareness to what’s happening. It’s incredibly sad to see.

I have so much respect for the sea. Every time I’m at the beach I think how lucky I was to make it. Many others suffered for hours and lost their lives. Angelina Jolie gave a speech asking, “Why me? Why am I so privileged?”

Sometimes I ask myself that as well, but I’m glad I do have a voice to change something and bring awareness.

I don’t like telling my story, but I know the impact it’s going to make. I want people to understand what’s happening with refugees all around the world, so I’ll tell my story a million times more if it helps just one person.

Yusra Mardini might not like to tell her story, but she knows the positive impact it can have.

What message do you want people to take away from The Swimmers?

I really hope that, first of all, people are able to change their perception of what a refugee is. They have to understand that anyone can be a refugee, not just from war – climate change, too. I live in LA, and some of the richest houses in Malibu are the first to be hit. We need a system that helps refugees find a home again. It’s not their fault that there’s violence in their countries. I had two choices – stay in Syria and risk my life every day, or risk my life one more time on this horrific journey to find a safe life. To me, that was the only choice.

Give refugees a chance. They’re normal people. It’s scary and hard. There’s space on the planet for everyone.

I want people to change the way they see the Arabic world and Arabic women too. We also have dreams and ambitions, because we have so much history. In 2012, Syria had more tourists than Australia! I’ve been asked the most ridiculous questions, like if I had swimming costumes or watched TV in Syria. What did they think, that I was watching chickens?!

The Swimmers is streaming now on Netflix.

You’re such a force for change – how are you hoping to continue your work with the UN? You’ve also spoken about starting your own foundation…

I’m still going to advocate for refugees. I’ve got my papers now, but I’ll always be a refugee. I’m hoping to go on a mission with the UN soon, visiting refugee camps. The majority of refugees are minors, and as it’s getting cold outside those kids are in tents. I hope I can touch lives with more than just words, whether it’s financially supporting refugees or building housing for them.

My foundation will focus on helping refugees on the education and sport side of things, and I also want a fashion line that contributes to my foundation. I’m excited to work with organisations like the Malala Foundation and Choose Love too.

Right now, I’m just taking it all in with the movie coming out. I hope this film puts the conversation back on the table and pushes politicians to open the door.

One thing we’ve barely spoken about is swimming, which is a key part of your story. After getting your German papers, you’re no longer eligible for the refugee Olympic team. How does that feel?

I am in complete denial. It’s been such a rollercoaster and I feel like it wasn’t the right way for me to say goodbye to swimming. I didn’t decide whether I want to take a break, give it one last try or say ‘ok, it’s time to move on.’ I feel like I’m grieving.

It breaks my heart to go to a competition and not be swimming in it, but at the same time I’ll always be thankful for my dad forcing me to take those lessons. For my mum waiting hours for us and drying my hair everyday so I didn’t get sick. And for my sister for making me so competitive and wanting me to be the best, even better than her.

The Swimmers will be available to stream on Netflix from 23 November. Shop the Choose Love x The Swimmers t-shirt here.