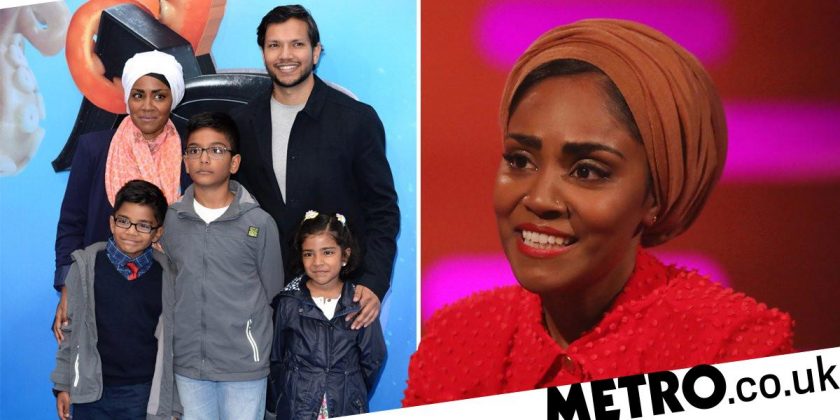 Nadiya Hussain has revealed she and husband Abdal are keen to adopt a child when they’re ’emotionally ready’.

However, she and Abdal have ‘always thought’ about expanding their family through adoption.

‘We’re always really open to adoption. There’s space for it in our heart and our home – we talk about it all the time,’ she said on Netmums’ Sweat, Snot & Tears podcast.

‘Once we’re emotionally in the right place, I think we will do it. We have so much love to give, it’s something we always think about.’

Nadiya also opened up about her struggle with anxiety, which she says she’s been ‘riddled with’ from an early age.

She explained: ‘I thought for a long time about how much I wanted to talk about my anxiety. I was riddled with it since the age of seven and have learnt to live with it.

‘I genuinely believe you can be really successful and motivated and be fragile and have mental health issues at the same time.

‘I was losing days and weeks with the children because I couldn’t get out of bed. The kids just thought I was tired, I’d spent a lot of years lying to my children, but there’s strength in telling the truth.’

The Bake Off winner previously opened up about being sexually abused at the hands of a relative when she was just five, in her memoir Finding My Voice.

She struggled with whether to include her brave account in her biography, but eventually decided to do so to raise awareness for youngsters in her community.

‘I know that sexual abuse is something we do not talk about enough and it is something that happens within my community, and it is hidden, and it is completely masked over,’ she said on Elizabeth Day’s How To Fail podcast.

‘People don’t talk about it and it happens within families, it happens all the time, and I’m telling you this as a member of a community, I have experienced it myself.

‘As a teenager of a group of five or six friends, it happened to every single one of us. There is a problem and that needs to be addressed.’