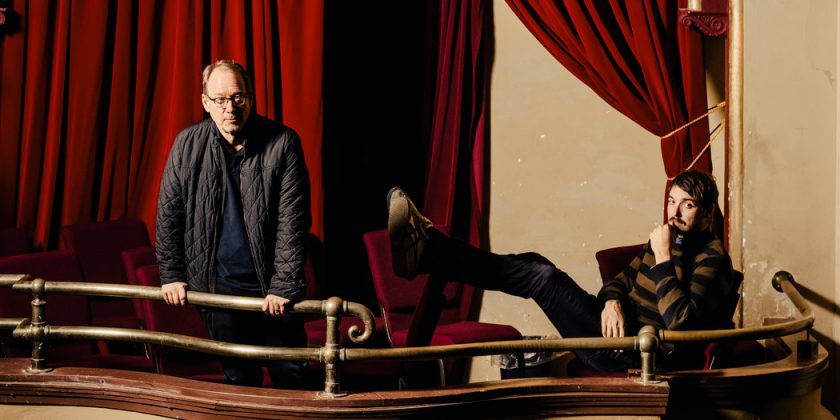 A schlub and some robots riffing on bad movies didn’t necessarily sound like a recipe for longevity when “Mystery Science Theater 3000” debuted on Minneapolis-St. Paul’s KTMA in 1988.

Hodgson and Ray called from the Portland stop of their since-completed tour to discuss “Mystery Science Theater 3000” past and present; their annual Thanksgiving-themed Turkey Day movie marathon, which ran last week; and which of the robots does the best David Bowie impression. These are edited excerpts from the conversation.

Joel has described the series as “a variety show built on the back of a movie.” Jonah, how would you describe “Mystery Science Theater 3000” to a skeptical or uninitiated viewer? 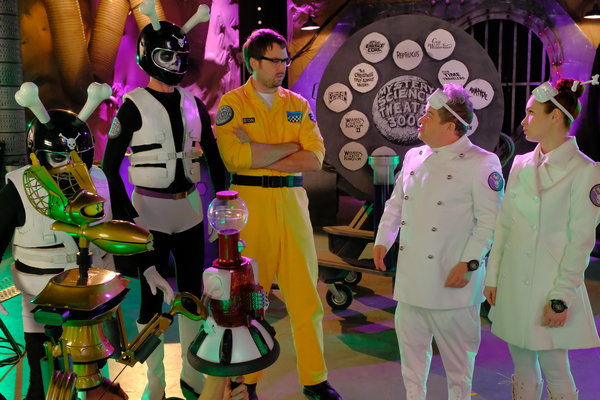 JONAH RAY We collaborate with these movies: We enjoy them and celebrate them in the best way we know how, which is to make jokes. That’s what I do in my everyday life. So I tell people: “We’re going to get together, watch a movie, and have a party while we’re doing it.”

JOEL HODGSON Until video games, movies felt like the biggest thing in the world. So we had to be in awe of them: “Don’t do anything to the movies, we need them, keep them intact, please!” What originally motivated me to do “Mystery Science Theater 3000” was my impulse to respond: “Oh, you can talk back to these things.”

How do the best jokes get chosen?

HODGSON I feel like the best way to run a writers’ room is to have sessions where you create as much material as possible, and then hold off discussing what we came up with until another time. You’re not creating and curating at the same time: creating inhibits curating, and curating inhibits your creativity. I know it’s very popular in L.A. to have a “Fight Club”-style atmosphere in writers’ rooms, where you have a top guy who yells at the writers something like: “Come on, feed me jokes! I’m in a bad mood, make me laugh!” But we don’t do it that way, and our show proves that our method works.

How do you divvy up jokes between Jonah and the actors who play Tom and Crow?

RAY Sometimes, when we’re recording the riffs, we’ll do a pass on one section of jokes. And at the end of the section, we’ll go: “I don’t know, I don’t feel like I’m nailing this line so much. Maybe it’s funnier coming from Crow?” Or: “This is a sing-songy thing, what if it’s a Tom Servo line?” Like last season, when Baron was struggling to do a Morgan Freeman impression, we tried it with Hampton instead. Hampton then does a spot-on Morgan Freeman. So we figured: “OK, Hampton does the Morgan Freeman line.” I remember Baron saying, “That doesn’t make me feel good at all!” But Baron does a better David Bowie impression, so if we have a Bowie joke, we’ll hand it over to Baron.

Why are there six episodes this season, as opposed to last year’s 14?

HODGSON Netflix told us, “Your die-hard fans are deliriously happy and going through all 14 of the new show’s episodes.” That said, look at how long that first season is: It’s about three times longer than a normal season of a Netflix show, like “Orange is the New Black,” or whatever they’re presenting. We sort of unwittingly created an enchanted forest that viewers can wander in and out of whenever they wanted to. So Netflix told us, “We think that we can increase more casual viewers if we do a shorter season.” We consequently tried to deliver something that viewers could watch and say, “Oh, it’s a Netflix series: It’s got a definite beginning, middle and end.”

Jonah, you’ve been with the show for about three years now. What has been the biggest source of encouragement or inspiration for you so far?

RAY Hearing from the old guard — the cast and crew members who used to work on the show. There was a really nice moment after my first season went up on Netflix last year, where [the former show writer and host] Mike Nelson got a hold of me and said: “Hey, I checked out the new season. Great job. You’re very funny.” He didn’t need to do that. Also, I now promote the show by going to all sorts of conventions, and I sometimes see people dressed up as my character. That’s a huge source of encouragement.

Joel, your annual Turkey Day marathon included episodes from the very first season. What was it like reviewing some of those old shows?

HODGSON I’ve always felt like we only really got our sea legs during the show’s second season. Still, I rewatched Season 1 and was knocked out by how good it was. I was especially impressed by many of the jokes written by [the former series writer] Josh Weinstein, the first guy to voice the Tom Servo character. He’s one of the best joke writers I’ve ever met; I see his input all over the first season. I was always self-conscious about our first season and felt like it wasn’t good. But it really is.

In the spirit of Thanksgiving, can each of you recall your favorite episodes — or riffs, or line deliveries — that the other has done on the show?

HODGSON There’s a sketch that I really like, with Joel and the ’bots in tuxes just hanging out, and acting like real bros. It was really hilarious to me.

RAY There’s something so specific about Joel’s way of speaking and his angle on things. Joel’s jokes read one way on paper, but when he says them aloud, his jokes sounds like something no one else has really thought of. During our most recent live tour, Joel Robinson and Jonah Heston watch [the campy 1988 sci-fi horror film “The Brain”]. And there’s a scene where one of that film’s main characters is surrounded by people in a diner’s back room. Then the people leave, leaving this character by himself. So Joel takes his time with his delivery and says, in his typical Joel Hodgson drawl, “Well, Jim, your long con finally paid off: You’re by yourself with eight cases of whipped cream and nothing but time!” There are some things that only Joel can do.

RAY Joel, the line I singled out to compliment you with was really specific, while the tux sketch was one that you suggested, one where I blindly trusted you.

HODGSON You’re a paper doll that I’m dressing up like a little baby.