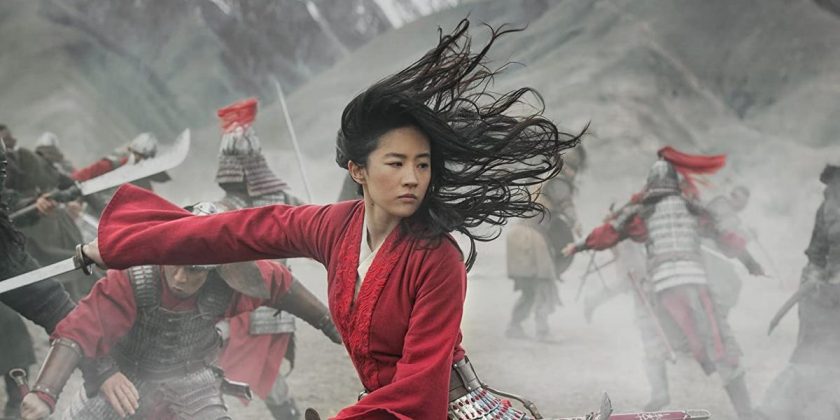 Disney's "Mulan," a live-action reimagining of the Chinese folk hero, will debut on Disney Plus on September 4 as a premium title. A new trailer showcases significant departures from the animated "Mulan" released in 1998, including a new witch character named Xian Lang and choreographed action scenes that exceed the imagination of the original film.

"Mulan" was originally scheduled to hit theaters in March and even had a Hollywood premiere event before the coronavirus pandemic forced theaters around the world to close. Now, the film led by Liu Yifei, Donnie Yen and Jet Li will be available online via Disney Plus, while countries where theaters have re-opened will still have the option for a theatrical release.

"Mulan" isn't the first Disney movie to find its way to Disney Plus after COVID-19 caused theaters across the United States to close, but it is the first to require an additional payment beyond the subscription fee. Pixar's "Onward" was also fast-tracked to Disney Plus in March after its theater run was cut short by the coronavirus. "Artemis Fowl" was scheduled to hit theaters in May but premiered on Disney Plus in June with disappointing reviews.

Marvel's "Black Widow" was due out in May but Disney has yet to reveal its plans for Scarlett Johansson's superhero film. Several new Marvel original series set to debut on Disney Plus in August have also been delayed due to the coronavirus.

According to Variety, Disney CEO Bob Chapek said the release of "Mulan" on Disney Plus is a special situation, rather than the company adopting a new business model.

How to watch 'Mulan' on Disney Plus

"Mulan" will be available to stream on Disney Plus starting September 4. To watch, you'll need a monthly or annual Disney Plus subscription, and you'll have to pay the $29.99 premium access fee. With that said, "Mulan" is not a one-time rental. Instead, once purchased, Disney Plus members will continue to have access to "Mulan" for as long as they remain a subscriber.

Streaming via Disney Plus will be the only way to watch "Mulan," since it wont be released in theaters in the United States and it's not yet available on Blu-ray.

The animated version of "Mulan" is already available on Disney Plus for all subscribers, if you don't want to pay the premium access fee. Disney Plus subscribers can expect the new "Mulan" to join the standard catalogue with films like "Aladdin" and "The Lion King" in the future too.

What is Disney Plus and how does it work?

Disney Plus is a subscription streaming platform with on-demand access to Disney's iconic library of movies and TV shows. Along with "Mulan," "Toy Story 4," "Frozen 2"  and Disney's other latest theater releases, you'll find classic franchises like "Star Wars," "The Simpsons" and Marvel's "Avengers."

A monthly subscription costs $6.99 per month while an annual subscription gives a small discount at $69.99 per year. Those looking for additional streaming content can sign up for a bundle with Disney Plus, ESPN+ and Hulu. The bundle costs $12.99 per month, which is about $5 less per month than it would cost to subscribe to each service separately.

Disney Plus is available to stream on Apple, PC, iOS, and Android devices, Xbox One and PlayStation 4, and streaming devices from Amazon, Roku, and Chromecast. Disney Plus is also supported on smart TVs, including those from Samsung, LG, Sony, and Vizio. An internet connection is necessary to stream, but Disney Plus does provide an option to download movies and shows for offline viewing

All Disney Plus subscriptions include ad-free streaming and unlimited downloads for a growing library of films and TV series. Disney Plus supports up to 4K resolution video on select titles, as well as Dolby Vision HDR and Dolby Atmos audio with applicable devices.

What other brand-new movies can I rent at home?

At $29.99, "Mulan" will cost $10 more than "Trolls World Tour" before including the cost of a Disney Plus subscription. During the company's most recent earnings report Disney announced that Disney Plus now has more than 60 million subscribers worldwide. However, Disney Plus isn't earning nearly as much money per subscriber as Netflix, its top competitor, and the company has suffered heavy losses in its live entertainment and theme park business due to the pandemic.

Other studios, like Sony, Lionsgate, Paramount, and Warner Brothers, have also been offering streaming rental or purchase options for select titles that were originally planned for theaters. "In-theater" digital rentals or purchases can be made through a variety of services, including Amazon Prime Video, Apple TV, Vudu, FandangoNow, and Google Play. For more information about digital rentals, check out our guide to streaming rental services.