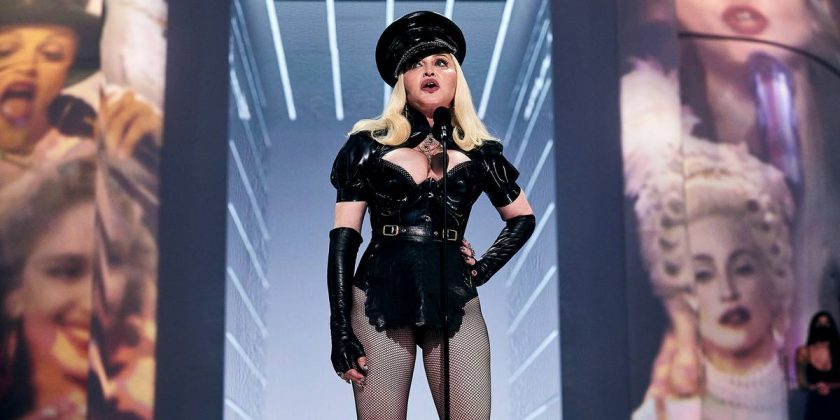 Typically one of the wilder award shows on the calendar, this year’s MTV Video Music Awards is underway at New York’s Barclays Centre.

First it was all about the red carpet (where Megan Fox wore potentially the most revealing outfit in event show history), with formalities now kicking off inside the arena.

An age-defying Madonna kicked off the show in one of her signature raunchy outfits – a tight leather leotard – as she detailed her love affair with New York which began at the age of 19 “when I arrived with $35 in my pocket”.

Justin Bieber and The Kid LAROI then opened the performances with their song, Stay.

Jennifer Lopez was up for presenting duties first, presenting Song of the Year to Drivers License by pop star of the moment, Olivia Rodrigo.

The first award of the evening for Song of the Year went – unsurprisingly – to Drivers License by pop star of the moment, Olivia Rodrigo, while Bieber picked up Best Pop for Peaches.

Billie Eilish was the first victim of the telecast ‘bleep’ after dropping the F-bomb in her speech after winning Video for Good for Your Power.

“I wanted to write this song for a really long time, and I finally did, and it was empowering, freeing and really f**king sad,” she said.

“I just want to say we need to protect our young women at all costs, and we need to remember we all have power and to not abuse it.”

Now the performances are well and truly underway, with Ed Sheeran giving a surprise showing of his brand new song Shivers, which he released on Friday.

A very Oprah-esque Billy Porter introduced Lil Nas X to the stage, but not before giving an inspired spiel about the changing face of the industry.

“When I was first coming up in this industry let me say, that the people were not ready for all this black boy joy,” Porter said, clad in top-to-toe gold.

“But children, it’s a new day and I am so thankful to have lived long enough to witness it.”

Lil Nas took the introduction and ran with it, with a re-creation of the X-rated music video for his song, Industry Baby, alongside Jack Harlow.

The music video – released in July – imagines a world where Lil Nas is sent to jail over the furore surrounding one of his songs – and features a (censored) nude prison block shower scene.

And we got to witness this in all its live-action glory.

One of the biggest gongs of the night – Artist of the Year – was presented to Bieber, who eclipsed a strong field including Ariana Grande and Taylor Swift.

He really dressed up for the occasion.

Rock legends Foo Fighters picked up the first-ever MTV Global Icon Award, belting out a medley of their biggest hits.

ARTIST OF THE YEAR

Demi Lovato – Dancing With The Devil

Lil Nas X – MONTERO (Call Me By Your Name)

Billie Eilish – Therefore I Am

SONG OF THE YEAR

GROUP OF THE YEAR

twenty one pilots – Shy Away