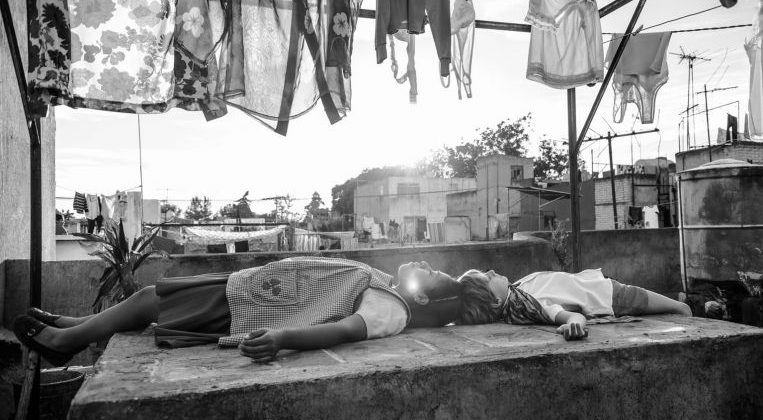 The story: In this semi-autobiographical film, taking place over 1970 and the following year, writer-director Alfonso Cuaron portrays the ups and downs of a middle-class family in the Colonia Roma neighbourhood in Mexico City, which gives the film its name. The family’s domestic helper, Cleo (Yalitza Aparicio) looks on, trying to find her place in a world in which only the needs of her employers and their children matter.

Small in scale but enormous in its emotional impact, this drama from one of Mexico’s top film-makers is a masterclass in how everyday events, shot in a natural, unforced way, can make for gripping cinema.

In his last feature, Cuaron handled the planet-sized science-fiction hit Gravity (2014), but here he shrinks the aperture to cover one nondescript city home, the place he knew as a boy.

Now lovingly revisiting it as an adult, he exposes undercurrents he missed as a child. Cleo is considered a beloved older sister one minute but in the next, she is berated for not picking up the family dog’s droppings. Cuaron, as a child, could never have sensed the rift growing between the parents (Sofia and Antonio, played by Marina de Tavira and Fernando Grediaga).

Outside the home, the family is also buffeted by bigger trends, such as civil unrest and the murderous reprisals that followed.

We in Singapore have of course seen our version of Roma in Anthony Chen’s Golden Horse-winning Ilo Ilo (2013), the film about a 1990s family living through the financial crisis, seen through the eyes of a Filipino domestic helper and the boy she looks after.

There are more parallels between the two films. Chen focuses on the powerful bond between the helper and her young charges, as does Cuaron, and Chen also shows the helper, a woman culturally and ethnically different from her employers, as someone with two faces, one she wears at work, and another on her days off. Cleo does the same. She is from the Mixtec indigenous racial group while her employers are white.

Where the two films differ lies in how Cuaron emphasises how that world as a boy was ruled by women, grandmothers, mothers and servants who learnt to look after themselves because the men they love are lost boys.

In Roma, husbands and male lovers are flighty creatures who wield male privilege like blunt instruments, then when it all goes wrong, leave the mess, literally and metaphorically, for women like Cleo and Sofia to scrape off the floor.

Cuaron, however, is too smart a film-maker to pass judgement on anyone (except the men) or to turn this into a weepie about downtrodden womenfolk.

He arrives at detachment through his use of beautifully rendered black and white. Also, his camera almost never goes into close-up. The world exists in wide shots, sometimes tracking sideways, as if you were walking beside the characters. But they are mostly fixed to the ground, allowing viewers the chance to take in everything in the room, or to glimpse the exquisitely detailed period locations.

These can be city streets teeming with toy vendors and pedestrians, or the poverty-stricken, sand-blown villages of the kind that women like Cleo grow up in, then be part of the exodus to the metropolis, sending back money to help parents and siblings.

Cleo is always moving. In the way she wakes up the children in the morning with a song, in how she brings tea on a tray, her devotion is palpable. And this is how this dialogue-light film operates. The way people do what they do – walking to the cinema, cooking, hanging the laundry, driving(there is a running gag about Sofia and her beast of a car), or in how they shop for furniture and shoot pistols in the forest for sport – speaks volumes about who they are.

Cleo, for example, answers the phone for the family, but before handing the handset to Sofia, she gives the mouthpiece a quick, almost imperceptible wipe with her apron. It is a tiny detail, but one that says so much about their relationship.

Funny, tender and heartbreaking, Cuaron’s portrait of his childhood is a powerfully affecting memoir of a childhood idyll just before it shatters. As events unfold, moment by moment, every setback carries a sting and every tiny bit of hard-won victory is cause for celebration.

Watch the trailer for Roma at www.youtube.com/watch?v=fp_i7cnOgbQ