There’s a lot of debate about former First Lady Melania Trump not having her own Vogue cover while husband Donald Trump was in the White House, but it may have sparked an entire movement in fashion with their conservative base. There’s a new online fashion media outlet that is drawing the attention of the MAGA crowd called The Conservateur.

The platform “aims to serve and represent the young woman who is missed by the mainstream media” who “loves her country, faith, and conservative values.” It’s for the Trump crowd because their first cover story is not Donald Trump’s wife, but someone Melania-adjacent: Lara Trump. Michael Schaffer, a senior editor at Politico, called the site “the “MAGA answer to Vogue” on The Daily Beast’s Fever Dreams podcast.

“In the case of these folks behind The Conservateur, it’s like, ‘Oh, Melania Trump was never given a cover of Vogue even though she’s so beautiful and the fashion industry is hopelessly woke,’” Schaffer explained. He believes that the conservatives are stuck in their ways thinking that magazines, which are struggling for an audience, are the most “authentic validation” for public figures — and that’s why they took the Melania snub so personally. “I’m sad to say that magazine covers don’t quite have the impact that they once did in our culture,” he said. “But among folks who think it was so unfair that Melania was excluded from Vogue, they are still sort of held up as this like amazing thing.”

Even though the podcast is joking about “corruption chic” fashion as a dig at January 6, Schaffer does praise The Conservateur‘s editors for creating a site that is “pretty nicely done.” So perhaps the left and the right can (sometimes) say nice things about each other, even though they will never agree on how Vogue‘s exclusion of Melania played out. 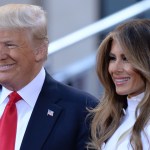 
Melania Trump Did Not Agree on Donald Trump’s Handling of COVID, Despite the White House Superspreaders She Hosted