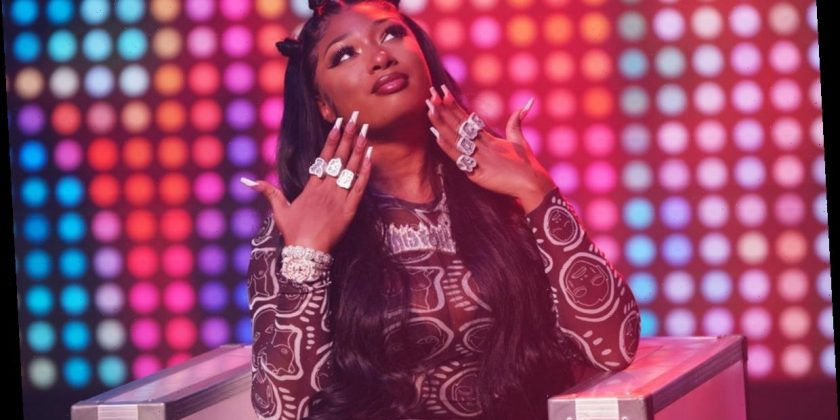 "We deserve to be protected as human beings."

Megan Thee Stallion called on fans to "Protect Black Women" on her Saturday Night Live debut, and she’s not letting criticism from the likes of Kentucky Attorney General Daniel Cameron stop her from amplifying this urgent message. In a new op-ed for The New York Times, Megan Thee Stallion addressed criticism of her SNL performance, explaining that she will always speak up for Black women and saying that they are "entitled to our anger."

On Oct. 3, Megan performed her hit single "Savage" on the famous SNL stage against a backdrop which read "Protect Black women." The number was interspersed with audio clips from Malcolm X’s famous speech about Black women, and activist Tamika Mallory’s words about Kentucky AG Cameron, before Megan herself spoke about the importance of Black lives. “We need to protect our black women, and love our black women, ’cause at the end of the day, we need our black women,” she said. “We need to protect our black men and stand up our black men, ’cause at the end of the day, we’re tired of seeing hashtags about black men.”

In her new op-ed, the rapper explained that while she was prepared for backlash against her performance — Cameron took issue with is inclusion — she wasn’t afraid of it. "It’s ridiculous that some people think the simple phrase ‘Protect Black women’ is controversial," she wrote. "We deserve to be protected as human beings. And we are entitled to our anger about a laundry list of mistreatment and neglect that we suffer."

She went on to list the many injustices Black women face in the U.S., including the fact that maternal mortality rates for Black women are three times higher than those of white women, and that an astounding 91 percent of transgender or gender-nonconforming people fatally shot in 2019 were Black people (as determined by the Human Rights Campaign). "Beyond threats to our health and lives, we confront so much judgment and so many conflicting messages on a daily basis," she continued, calling out the media for pitting Black women against each other and "the obsession with Black women’s bodies."

The artist also opened up about her shooting in July, during which she sustained two gunshot wounds to her foot, requiring surgery. Rapper Tory Lanez, who is now facing charges of assault in the case, has denied shooting her, but in her op-ed, Meg stood by her claim and explained why she was initially silent on the matter — publicly and with the police. "Even as a victim, I have been met with skepticism and judgment," she wrote. "The way people have publicly questioned and debated whether I played a role in my own violent assault proves that my fears about discussing what happened were, unfortunately, warranted."

Megan concluded her op-ed by calling for the achievements of Black women to be taught in schools, and, most importantly, by encouraging Black women to vote, despite not getting the respect and support they deserve in kind. "Black women are not naïve," she wrote. "We know that after the last ballot is cast and the vote is tallied, we are likely to go back to fighting for ourselves. Because at least for now, that’s all we have."

Are you ready for Election Day? Start by registering to vote and making a plan for Nov. 3.