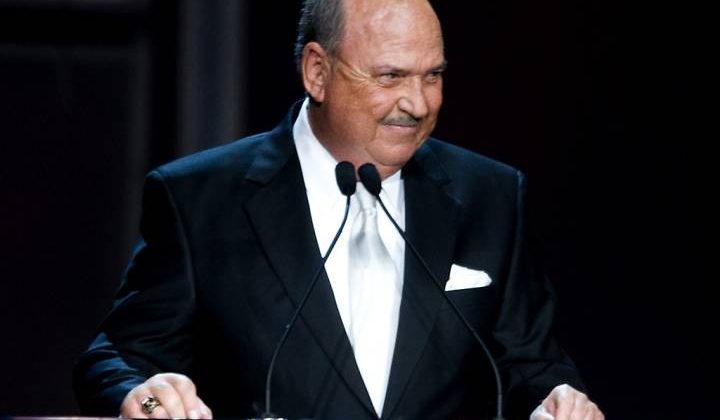 The World Wrestling Entertainment Inc. (WWE) confirmed the death of world-renowned interviewer “Mean” Gene Okerlund in an official statement. Okerlund passed away on Wednesday morning at the age of 76.

The legendary broadcaster was known and loved for almost five decades of service as “the most recognizable interviewer in sports-entertainment history.” Okerlund’s cause of death has not yet been revealed.

The staff at WWE extended their condolences to Okerlund’s close friends and family in a heartfelt statement revealing the unfortunate news.

“WWE is saddened to learn that WWE Hall of Famer Gene Okerlund, the most recognizable interviewer in sports-entertainment history, has passed away at age 76,” they wrote.

The statement continued, “‘Mean Gene,’ as he was named by fellow Minnesotan, Jesse ‘The Body’ Ventura, made the move to WWE in 1984, where he became as recognizable as the superstars he asked the questions to, including ‘Macho Man’ Randy Savage, The Ultimate Warrior and, perhaps Okerlund’s greatest guest, Hulk Hogan.

Upon hearing the news, Hogan posted a tribute to Twitter saying: “Mean Gene, I love you my brother.”

Among wrestling fans, Okerlund’s character was a fan favourite, not only because of his unique interviews and questioning tactics, but also because of his dry humour, stone-cold reactions, and of course, the unforgettable segments he turned into comedic gold.

An influx of tributes and condolences flooded Twitter from a number of celebrities, including many of the professional wrestlers he worked with during his 47-year career in the industry.

From Hogan to Triple H, Steve Austin to Jerry Lawler, the biggest of names shared their joy in working with Okerlund.

Born Eugene Arthur Okerlund on Dec. 19, 1942 in Sisseton, S.D., Okerlund began his career working through the southern states as a radio DJ. His debut in the pro wrestling industry came in 1970 when he joined the American Wrestling Assosication (AWA).

After more than 14 years as a ring announcer, Okerlund joined the WWE/WWF for a decade as their beloved interviewer — which is where he earned his title and legacy.

“As the respected and reliable man behind the microphone in WWE, Okerlund branched out from interviewing and provided ringside commentary and hosted several shows, including All-American Wrestling, Tuesday Night Titans, Wrestling Challenge and Prime Time Wrestling,” the WWE’s statement also read.

Okerlund was a man of many talents. He bounced between the WWE, WWF and the World Championship Wrestling, partaking in segments in which he acted as a host, ring announcer, and of course, the main interviewer.

His final television appearance was on Jan. 22, 2018 for the WWE, during a 25th anniversary episode of Raw, in which he interviewed wrestler AJ Styles.

Okerlund is survived by his wife of 54 years, Jeanne Okerlund, and their two children, one of whom is Todd Okerlund, a former NHL player for the New York Islanders in the early 1980s.

As of this writing, there is no information about any funeral arrangements.