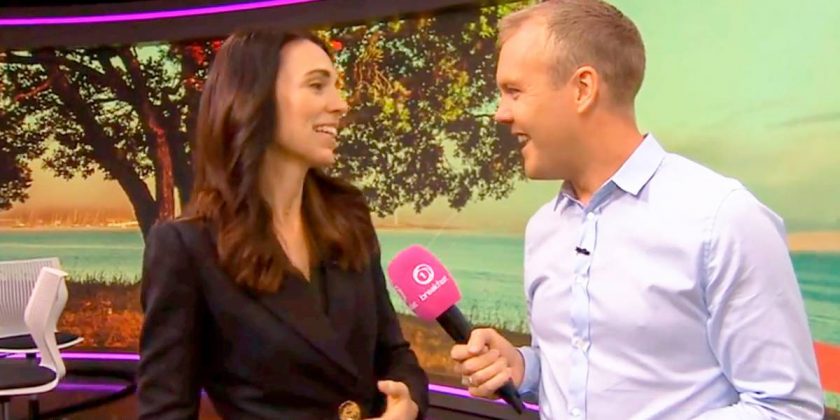 The popular presenter has hit his stride as he revels in his role of mover and shaker.

He’s a seasoned journalist with five years under his belt on the Breakfast show, but it’s impossible to talk to Matty McLean too long without bringing up dancing.

He is a natural on the floor as many of us realised after he started posting dance videos with his co-hosts Jenny-May Clarkson and Jenny Suo during lockdown.

His moves are so good, he must have been trained.

“You’re far too kind,” laughs Matty, 35. “I haven’t been trained, but I have always loved dancing, not in a class or anything like that, but having a bit of a boogie, definitely. When I was young, I did really want to take dance lessons, but I didn’t have the easiest times at school as a flamboyant 11-year-old, so I stopped myself and I wish
I’d done it now.”

Matty says the idea for the dance videos started as something silly to do during lockdown when the Breakfast crew had been divided into two teams so that if one became ill, the other could keep the show going.

Matty was teamed with Jenny-May and Jenny, while the other team consisted of John Campbell, Indira Stewart and Melissa Stokes.

“We thought we’d do it once as a fun little thing to entertain us during our first week of lockdown before the show,” Matty explains. “We learned a new dance routine every day and put our first one up on TikTok. People really liked it and asked us to do another one. So, all of a sudden it became a thing and here I was at 35 dancing on a TikTok platform for 20-year-olds!”

The dance routines were not a waste of time, however, as the trio has been nominated for the New Zealand TV Awards’ Personality of the Year trophy.

“Apparently none of us were a strong enough personality to be nominated individually,” says Matty. “But we’re sort of like a Captain Planet-style nomination where we combine our personality powers.”

He says it was sweet to be nominated, but he’s not expecting them to win.

Now that the Breakfast team is back on air, will there be pressure for the dance-offs to continue featuring John Campbell?

“Can you ever imagine John Campbell dancing?” says Matty. “We have music in and out of our ad breaks, and John won’t even lift a finger to tap it on the desk – he is that uptight,” jokes Matty. “He is a self-described uptight man!”

But the dancing was not the only talent to be realised from the lockdown shows last year. Each of the core four presenters – Jenny-May, Indira, John and Matty – had to step up and do more with their roles, which highlighted how multi-talented they all are.

“What we’ve shown is that everyone on the show is really multifaceted and everyone can do everything,” he enthuses. “Once upon a time Breakfast was very much two main presenters, one specific newsreader and one specific weather presenter, and everyone stuck to their prescribed role.”

Matty says John is a perfect example of being a journalist who can do everything.

“When he came to Breakfast, everyone thought all he did was his hard-hitting, serious journalism, but what John has shown is that he has so many different elements to him. He’s shone on Breakfast and, yes, he does those really serious interviews, but he can also do really beautiful, light-hearted cooking segments with Sarah Tuck.

“Indira stepped up from not just reading our news bulletins but also doing very serious interviews, and she nailed it. That interview with Judith Collins last year was talked about for months afterwards,” he says, referring to his co-host questioning the former National Party leader about her decision to travel during lockdown.

Matty says he too stepped up to interview the Prime Minister every second week and was initially quite nervous about returning to the reporting role he started out doing at TVNZ.

“I was nervous because I wanted to do a really good job, and I’d seen John and Jenny-May excel in that role, so I felt like I had a lot to live up to. But I feel like I did a really good job because I had great support. The team at Breakfast is amazing behind the scenes, but also the other three people I present with are so helpful. You can ask them anything and spit-ball ideas, and make sure you’re doing the best job that you can do.”

As a result of everyone stepping out of their specific roles, Breakfast will be a bit different this year with all four journalists presenting and reporting. “I’m ready to get back into it and because there are the four of us, I’ll never feel alone,” he asserts. “I’ll always feel like I’ve got someone there for support.”

Matty says another thing that will be different this year is that if one presenter is doing a live interview and another presenter sees a gap because a question has been missed or they are just curious, they will jump in and ask it.

“I feel like we can all nail that interview together and I’m excited about that because I’ll be growing and shining a bit more.”

Matty has a huge fanbase on social media with thousands of followers on his Twitter, Facebook and Instagram accounts. His posts are refreshing for a celebrity because they are relentlessly positive, lacking any hint of narcissism and are very funny.

“I always try to see the light and joy in life,” he says. “I’m not too cynical and there’s enough negative stuff on social media, so I don’t want to add to that because that’s not what I’m looking for. I want to be entertained and uplifted and be happy and smile and have a giggle, so that’s what I like to put out there as well.”

He’s also shown a true talent for the new daily online word game Wordle, which is captivating New Zealanders, especially writers and journalists. Players have six tries to guess a five-letter word and Matty has got it in two – twice. And tweeted about it.
“It was pure luck and nothing to do with my word power,” he says modestly.It’s this positive personality that has made him so popular on our screens, but it has also meant sharing a lot of his life with his viewers, including the return late last year of his brother and sister to New Zealand. Breakfast’s cameras were there the moment Matty saw his siblings for the first time in three years. There were tears all round onscreen and in viewers’ homes.

“I think it resonated with people because everyone has had some sort of disconnect from loved ones over the past couple of years and maybe it summed up the mood of the nation a little bit.”

His sister Mikaela, 26, was returning from London and brother Rob, 32, from Sydney. How did they feel about being on nationwide television for that moment?

“Mikaela is very much like me, so she is something of a show pony and so she was game for all of it, but Rob was less so. I managed to talk him into it, but he did say he’s never doing it again.

“I’ve become used to sharing my life with people but it doesn’t come naturally to everyone.”

The reunion meant that Matty and his partner Ryan Teece were able to spend time with the McLean family in Queenstown all together for the first time in years, and also with Ryan’s family in Nelson, who had not seen the couple since August.

“It was a beautiful Christmas seeing both families. We felt very special.”

Matty and real estate agent Ryan, 30, are coming up to their fifth anniversary and have talked before about wanting to bring children into their family unit, but Matty says it is probably still something for the future to look forward to.

“Things are going really well in our relationship, and we adore children and talk about it frequently, so perhaps one day it is something we will look into, but obviously there is a lot that goes into that. We need to make sure that we are definitely ready to invite that into our lives because it will be quite the process when we decide to do it.”

Meanwhile, their dog Otis is the love of their lives.

“When we got him, he was technically Ryan’s dog because on our first date he told me he had just agreed to take on a puppy that was about to be born, so I was like, ‘I guess I’m a dog person now if this goes anywhere,'” recalls Matty. “Now I’d say he’s more my dog than Ryan’s, mostly because I go to work early, so I’m home early and the two of us spend a lot of time together during the day.”

Matty headed back to work last week with a fabulous interview with Kiwi actress Melanie Lynskey for the first show and is looking forward to a year of live TV and being man on the spot.

“We all really love getting into communities, going live for news events or equally just an exciting community event,” he tells. “We love being out and about, so there will be a lot more of us on Breakfast getting around New Zealand, and into people’s communities and homes.”

And there may be more dancing, he hints. He says that if Dancing with the Stars wasn’t on the competing network, he would be up for it 100 per cent, but instead he’s focusing on TikTok and thinks that he’s slowly getting better over time.

“The dancing has ended up bringing me a lot of joy,” he says.