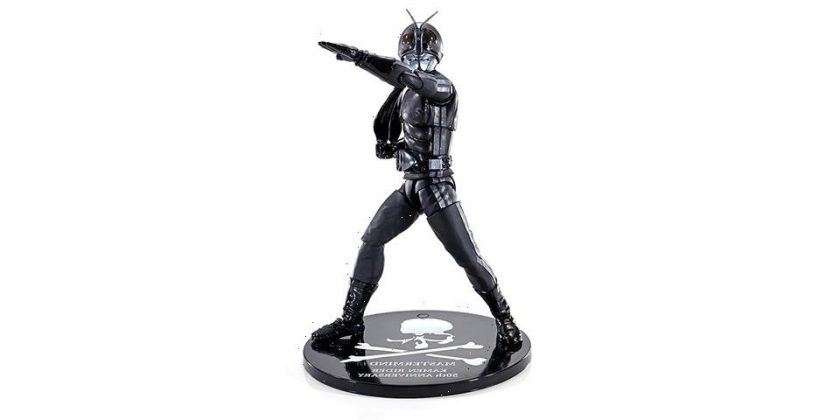 For the 50th-anniversary of Kamen Rider, Premium BANDAI has partnered with mastermind JAPAN on a tonal collection. Comprised of apparel and an exclusive figure, the special range builds on mastermind JAPAN founder Masaaki Honma‘s love of the tokusatsu television series since he was young.

Marking five decades of Kamen Rider, the collaboration is led by the SHINKOCCHOUSEIHOU series Kamen Rider No. 1 Black Version figure from S.H.Figuarts by TAMASHII NATIONS. The intricately sculpted figure is rendered in matte and glossy black with chrome metallic elements. The release comes complete with a circular stand emblazoned with markings commemorating the team-up.

The accompanying apparel range is comprised of coach jacket, hoodie and T-shirt continue the black theme. Graphic detailing comes in the form of Kamen Rider No. 1 doing his signature henshin pose, co-branding and five skulls motif to mark the 50th-anniversary.

Check out the range above and look for the mastermind JAPAN Kamen Rider 50th-anniversary collection to be available from mastermind TOKYO and at select retailers like HBX.