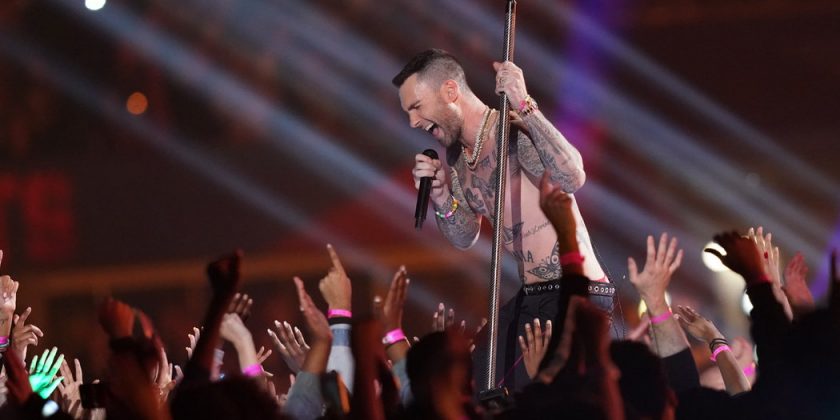 Maroon 5 — a quasi-soul, quasi-rock, utterly funkless band — was the main attraction at the Super Bowl halftime show at Mercedes-Benz Stadium in Atlanta, likely the third or eighth of maybe fourteenth choice for a headliner.

In a year in which the Super Bowl halftime show has become a referendum on political mindfulness, in which the N.F.L. has become a staging ground for conversations about racial justice in America, Maroon 5 was a cynically apt choice. It is neutral, inoffensive, sleek without promising too much. For nearly two decades, it has been wildly popular without leaving much of a musical mark, as easy to forget as mild weather.

And the band did no better during its 13 and a half minutes here, in a performance that was dynamically flat, mushy at the edges, worthy of something much worse than derision: a shrug. It was an inessential performance from a band that might have lost some moral authority if it had any moral authority to lose.

Perhaps for the N.F.L., which likely sought to make the halftime performance as anodyne as possible, this was a victory. 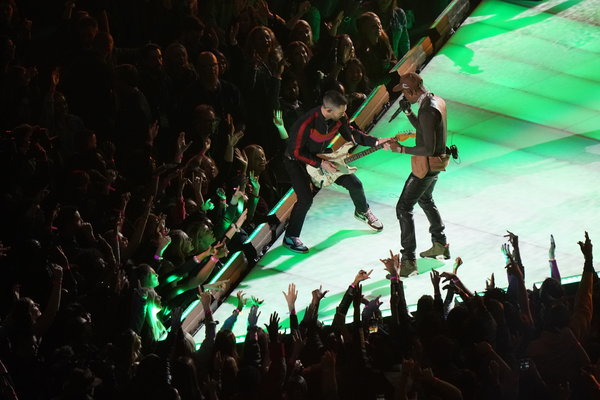 But what saddles Maroon 5 as a band — its propensity to pretend lithe things are thumping, its commitment to thinning out the soul and rock of the 1970s and 1980s until they’re so brittle they might snap — doomed this performance, which blithely skated through a half-dozen of the band’s hits.

And in a year in which the political valence of the halftime show mattered more than ever, the band’s stubborn resistance was glaring. The N.F.L. canceled the traditional news conference for performers this year, looking to avoid a fiasco. But the frontman Adam Levine did do an interview with Entertainment Tonight in which he suggested that the choice to perform at the halftime show triggers in some an “insatiable urge to hate a little bit.”

“No one thought about it more than I did,” he added, not very reassuringly. “I’m not in the right profession if I can’t handle a little bit of controversy.”

Efforts to blunt Maroon 5’s dullness, and its political aversion, were being made for weeks before the formal announcement that it would be the headliner. In December, Variety reported that the band had approached a half-dozen black artists to appear as part of the performance.

But the decision of whether or not to perform was now oriented around the protests of Colin Kaepernick and other N.F.L. players, who in 2016 began taking a knee during the national anthem (or otherwise not standing at attention) as a means of drawing attention to the systematic oppression of black people in this country.

The halftime show — one of the biggest stages in pop, and also an unpaid performance on behalf of the N.F.L. — became radioactive. Perform, and be perceived as a shill for the league. (Kaepernick is currently pursuing a grievance against the N.F.L., accusing team owners of colluding to keep him from playing in the league.)

Ultimately, Maroon 5 — a band that hasn’t had a Top 20 hit without a black or Latina guest performer in four years — was joined by Travis Scott, hip-hop’s most energetic performer, but not one much troubled by political concerns. (Last month, Scott announced that he would, in partnership with the N.F.L., donate $500,000 to a nonprofit organization, Dream Corps.) Also added to the performance was Big Boi — one half of Outkast, and an Atlanta rap elder — which felt like an attempt at moral cover. Online petitions requested all of the performers take a knee in support of Kaepernick and his goals. No one did.

For what it’s worth, the toxicity of being associated with the Super Bowl didn’t appear to extend beyond the halftime performance. Chance the Rapper performed in a Doritos commercial (with the Backstreet Boys); 2 Chainz was entertaining in an ad for Expensify; Cardi B and Lil Jon tag-teamed in a Pepsi ad. Both of the pregame performances were by black artists: a taut, controlled reading of “America the Beautiful” by Chloe x Halle and an impressive, if Disney-saccharine national anthem from Gladys Knight, who before the game, criticized Kaepernick for making the anthem a site of protest.

In this context, Maroon 5 was a dead band walking: a base coat destined to be painted over. Three years ago, Beyoncé effectively hijacked Coldplay’s performance for one of the most rousing and politically savvy halftime performances ever. But nothing even remotely on that scale happened here. Scott and Big Boi were ushered on and offstage quickly, boxes that had been checked off.

Scott bark-rapped his way through “Sicko Mode,” and at the end of his moment, fell backward onto the crowd, as close to his mayhem-filled live shows as circumstances allowed. Big Boi emerged in a Cadillac wearing a fur coat — the most exciting moment of the whole show — and did a casual pass at Outkast’s “The Way You Move,” with Sleepy Brown. When Levine joined them for a synchronized two-step, it took him a second or two to catch the groove.