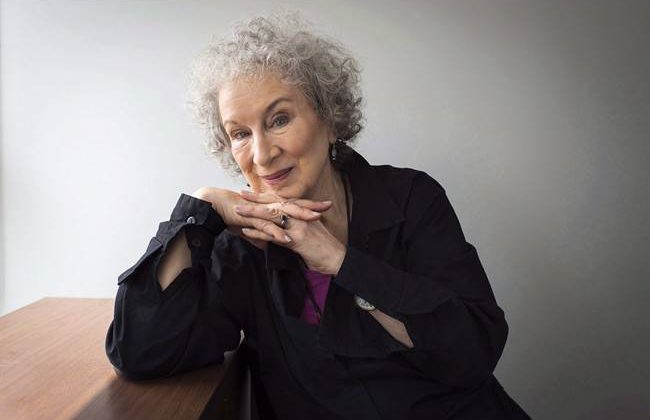 A social media user who turned to Twitter for help in writing an essay on The Handmaid’s Tale has received invaluable insight— from none other than author Margaret Atwood herself.

A Twitter user identified online as Momchil Gavrilov tweeted at the Canlit giant early Thursday morning with the plea: “My crazy English teacher is making us write essays on #TheHandmaidsTale where we are supposed to answer why @MargaretAtwood put the theme of power and control in the book,” they write from an account with the handle ?GavrilovMomchil.

“We do not have telepathy with @MargaretAtwood so I guess twitter is a close second… Helpppp!!!??”

Atwood responded hours later from her verified account with a quick lesson on the major themes of her 1985 dystopian novel, set in a world in which women are property of the state.

“Because it’s in the world,” Atwood says in a tweet posted at about 5 a.m. ET Thursday.

“It’s not just women who are controlled in the book. It’s everyone except those at the top. Gilead is a theocratic totalitarianism, not simply a men-have-power women-do-not world. Lower-status men are told when and who (to) marry, eg.”

The detailed response delighted online onlookers, who had retweeted the exchange more than 550 times and gave it almost 3,000 “likes” within five hours.

At least one other literature fan applauded the initiative.

“I used to teach high school. I’d have totally given points for proven communication with the author. This is not to say that everyone should bother poor @MargaretAtwood with all of their questions. Oh, dear,” tweeted Jess Faraday, with the handle @jessfaraday.

Atwood is a prolific Twitter user who has not been shy about using social media to weigh in on social issues, promote her work and favourite causes, or interact with fans.

She took an extra moment between retweeting comments about U.S. President Donald Trump and a CNN reporter to defend the teacher’s assignment as a worthy endeavour.

“Nor does that English teacher sound so crazy. Just sayin’. Though it might be the admiring use of crazy, as in ‘Crazy, man!’” adds Atwood in a subsequent tweet.

Attempts to reach the Twitter user who made the plea were unsuccessful.