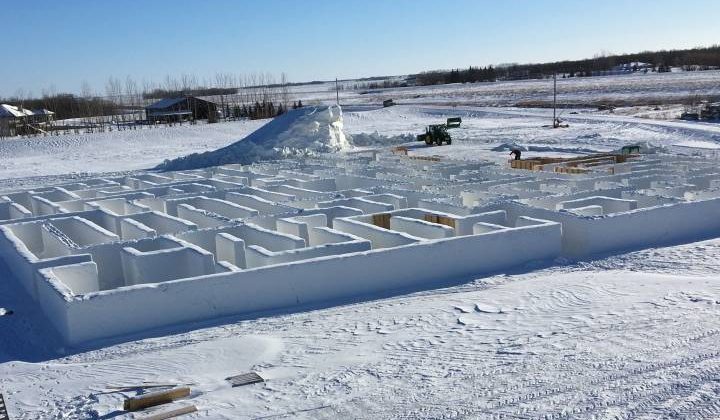 As the temperature in Manitoba is dropping, the walls for a new snow maze are rising.

For the past month, staff at A Maze in Corn have been crafting their latest challenge — a snow maze.

“The building is wildly different [than making a corn maze]. I mean it’s more akin to what framers that frame up concrete walls would do,” owner Clint Masse said.

It all started on their empty corn field and they’ve been building the walls out of wood and then covering them with snow.

“When we started, I thought 200 feet per day would be attainable,” Masse said. “We started and it was 80 feet per day. And I thought if we had to do 4,200 feet winter would be over before we’re done. Like everything, you start … getting better and a little faster.”

The walls are six-and-a-half feet tall and the plan is to shatter a Guinness World Record for the largest snow maze. The current record is held by the Fort William Historical Park in Thunder Bay, Ont..

“On measurement day that’s when you find out. So we are crossing our fingers and we are hoping this will be the world’s largest snow maze,” Masse said.

“[It’s] for Winnipeg and all the patrons. They’re all part of this because they’re what’s made this possible for us.”

Masse doesn’t know exactly how long it will take for visitors to complete the maze — which he said is a bit more challenging than their corn mazes — but expects it will take people 45 minutes to an hour to make it through.

Masse said they have built in plenty of exits, and are planning on having fire pits inside the maze to add to the adventure and help keep people warm.

“I think as Winnipeggers we celebrate winter and having an activity outside is huge. This is really wintery. What’s really cool is, wind is always a hassle for winter, but in the maze the wind is just about zero,” Masse said.

The maze opens Saturday. Prices will the same as with the corn maze in the fall.