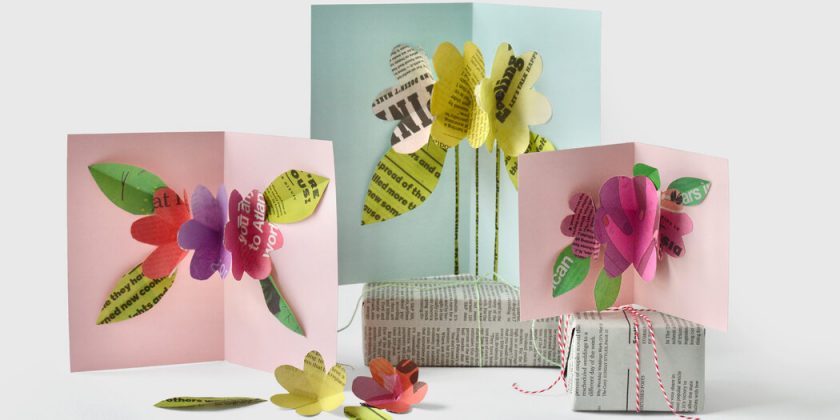 Coax your newspaper into three-dimensional flowers to make a sweet springy pop-up card for a special someone: mother, aunt, grandma, sister, friend, anyone! Once you learn this surprisingly simple technique for making cupped flowers, you can layer or tape them side-by-side to make different styles. Cut almond shapes and thin strips of newspaper for leaves and stems.

You’ll fold a square of paper to cut all the petals at once, similar to how you make a paper snowflake, then use a technique similar to sewing a dart to create the flower heads. An important trick: Use very tiny pieces of double-sided tape to stick the flowers to each other and the card to allow them to “bloom” when you open it. 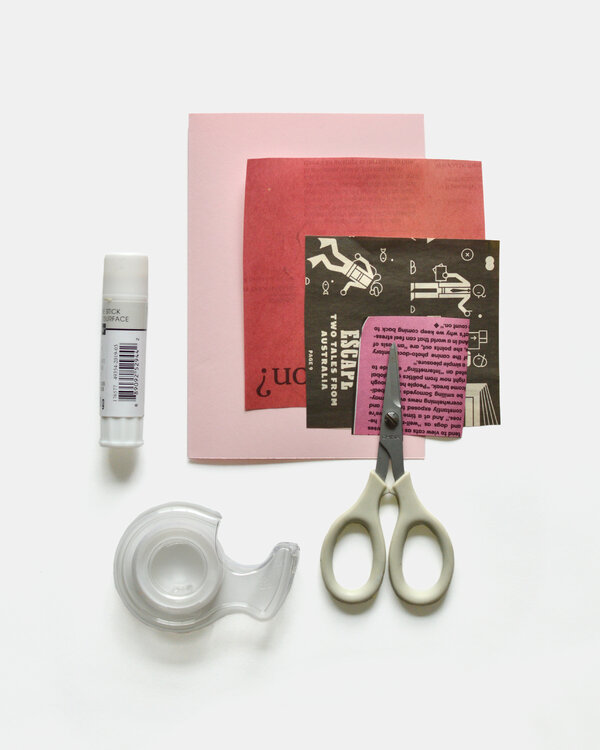 Blank card (or a piece of cardstock or heavy paper, folded in half)

1. Fold the largest square in half and then in half again. Fold in half yet again, diagonally.

2. Use scissors to round off the open corner.

3. Unfold your paper. Cut one petal out.

4. To create the cup shape, rub the glue stick over one petal next to the cut out. Overlap with the petal on the other side of the cut and press to glue in place.

5. Use smaller squares to create additional blooms and stick them to the inside of the larger flower with a small (about ¼-inch) piece of double-sided tape.

6. Fold the flower in half. Put a ¼-inch piece of double-sided tape on the back of the middle petals toward the flower’s tip. Stick the folded flower to one side of the card, on or near the center fold.

7. Then close the card and press down so that the other side sticks to the card.

8. For a multi-flower card with leaves: make two or more flowers per the instructions above.

To make leaves, cut almond shapes and fold them in half. Fold the flowers in half. Line them up and use a piece of double-sided tape on the back of the flowers’ middle petals to stick them to each other and then repeat Step 6 to stick to the card.

9. Tape or glue the leaves around the flowers.