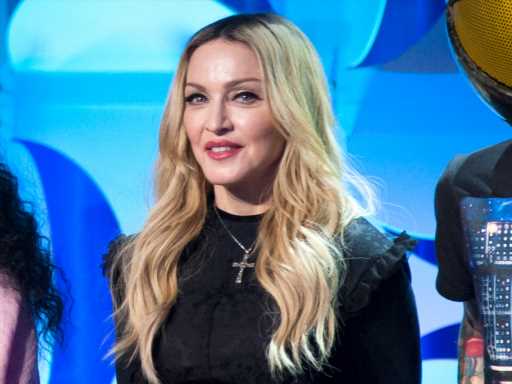 It was a festive Easter holiday in Madonna’s house as four of her six kids celebrated with her. David Banda, 16, Mercy James, 16 and twins Estere and Stelle, 9, took their egg-decorating party to the next level with glitter, music and a little bit of twerking.

The entire family, including Madonna, got into the spirit by wearing fuzzy bunny ears, while they decorated their eggs. This wasn’t just a normal dye-the-Easter-eggs kind of party — they had glitter, accessories and paint ready to go. Mercy James added her name to her egg while Madonna stirred the food coloring to the perfect shade of green. It wasn’t long before David Banda was up and grooving to the beat of SPINALL & Fireboy DML’s “Sere” single.

Madonna got into the act, dancing alongside her teen son, whose booty started shaking, much to the amusement of his twin sisters. And if you want to know what the Material Girl thinks of her Easter artistic creations… well, she says they are “chic and glamorous.” She also titled the sweet family video, “Couple of crazy Bunnies………” There’s no denying the 63-year-old star is enjoying every minute of motherhood — even if she’s got a strict set of rules.

She made David Banda wait longer than his older siblings, Lourdes Leon and Rocco Ritchie, to get a smartphone because she felt that “it ended [her] relationship with them.” She explained to Vogue U.K., “Not completely, but it became a very, very big part of their lives. They became too inundated with imagery and started to compare themselves to other people, and that’s really bad for self-growth.” And that’s probably why Madonna makes sure to keep her four youngest children engaged in family activities. It’s easy to get lost in social media, but an Easter bunny dance party is pretty epic.

Before you go, click here to see more celebrities with huge families.