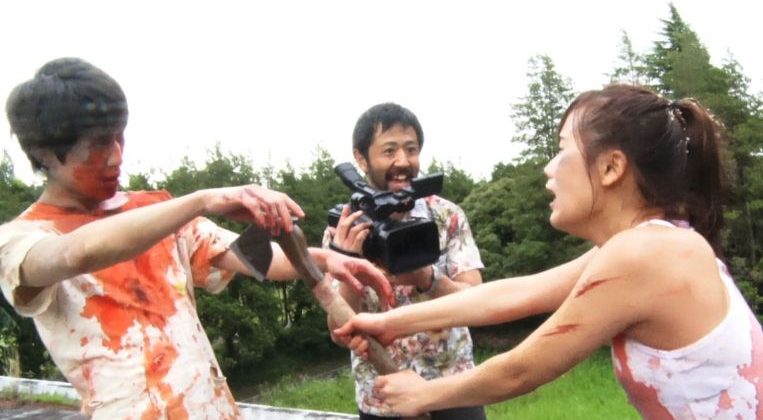 The story: In an abandoned building, a team of film-makers are trying to shoot a zombie movie. When a real zombie apocalypse occurs, the director of the movie, Higurashi (Takayuki Hamatsu), insists on keeping everyone trapped there and the cameras continue to roll.

The best way to enjoy this film is to not know anything about it beforehand, so just take my word for it and maybe stop reading this review right now.

If you need to know more, it is an ultra-low-budget Japanese film featuring a zombie apocalypse and it is often very, very funny.

Word of mouth about the film was so strong when it premiered in Japan in November 2017 that it went on to make more than 250 times its budget of three million yen (S$37,300).

The film kicks off with a single 37-minute take of a bunch of actors and an increasingly impatient director trying to shoot a zombie movie.

This segment looks grainy, schlocky and technically problematic as handheld cameras are seen dropping on the floor and the actors often appear awkward and forget their lines.

It is a relatively entertaining opening act, although not particularly fresh in the zombie movie genre.

It is only after this segment is over that the hype over One Cut Of The Dead makes sense as it goes “behind the scenes” to tell the story of how the team had pulled off the uninterrupted take.

The reasons the actors look awkward, for example, are explained – and the results are hilarious. It becomes apparent that this debut feature from indie Japanese film-maker Shinichiro Ueda is not a horror movie at all, but a surprisingly heart-warming work that pays tribute to the art of genre film-making.

The dedication that the crew in the fictional story put into creating the movie is likely matched by that of the film-making team in real life, and one cannot help but be moved by that passion.

The entire cast of unknowns here is also utterly likeable – lead actor Hamatsu, in particular, manages to convince as both a spirited movie director and a sweet and loving father.

When was the last time one could call a zombie movie charming?