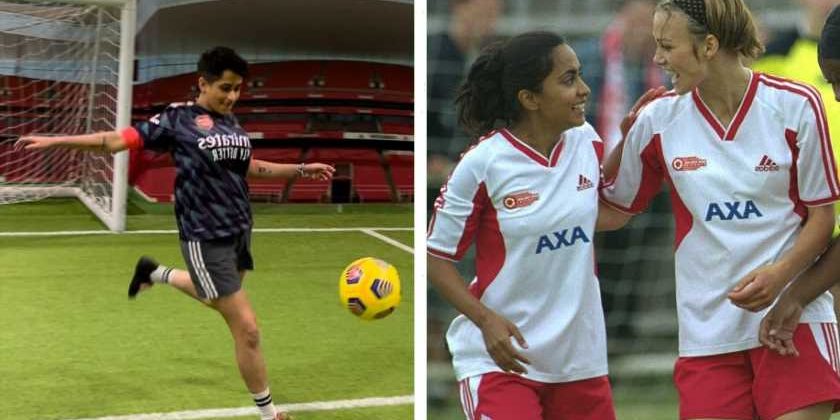 2022 marks the 50th anniversary of the UK’s first official Pride march. To celebrate this milestone, Stylist is carving out space for stories of LGBTQ+ joy in our new series, The Moment That Made Me, in which we invite LGBTQ+ writers to reflect upon the moments they first felt seen and heard in popular culture. Here, journalist and broadcaster Shivani Dave traces the queer legacy of Bend It Like Beckham.

“KISSING? ME? A BOY? You’re mad, you’re all bloody mad!” These words, shouted with utter disgust by Jess in Bend It Like Beckham, resonated with me from a young age.

I don’t actually remember when I first watched the smash-hit 00s movie. It came out when I was six, and being a football loving, South Asian girl*, I’m pretty sure my parents would have sat me down in front of the TV screen soon after the release. I’ve watched it at least once a year since then (probably more).

Bend It Like Beckham 20 Years On: this new BBC documentary will explore the cultural impact of the smash hit film

I’m not going to put a spoiler alert here, because the movie has been out for 20 years, and frankly, you should have watched it by now. It follows the story of the strong-willed and fast-footed Jesminder “Jess” Bhamra (Parminder Nagra), who has a daily battle balancing her “duty” as a South Asian daughter (think professional degree, marriage and babies) and her passion for the nation’s favourite game, football. Throw into the mix the fact that Jess is overshadowed by her sister’s impending nuptials and is being pursued by the local hottie-slash-footballer, Jules (played by Keira Knightley), who convinces Jess to fake a part-time job to play football. Together Jess and Jules seem unstoppable, both on and off the pitch.

Even now, having watched the film countless times, I can still feel my heart racing every time Jules longingly gayzes (gay gazes) across the park when she sees Jess for the first time. Later on in the film, I feel my palms get sweaty when the inseparable teammates sneak the odd hand hold. Or when they have a devastating fight in a way that is just a little too intense for the normal range of friendship. Every time Jess gags at her family making jokes or references to her marrying a boy is something that connected with me before I understood what sexuality even is. Do I understand sexuality now? Do any of us?

Jess’s repulsion at the idea of dating boys in the film because she is “not like the other girls” seems to me like a thinly veiled way to get a lesbian story onto the big screen in 2002. The film wants us to believe that she only cares about football and David Beckham, but my little queer heart knew better, back then and still today. And despite being a straight cisgender man, David Beckham was undoubtedly a gay icon in 2002. He was to millennials what Harry Styles is to Gen Z.

Football here is a metaphor playing on the classic stereotype of lesbians who love sport and wear three-striped tracksuit bottoms. The film isn’t about Jess wanting her family to accept her as a footballer. I mean it is, but it isn’t, really. If you follow my metaphor, it is about her family accepting her as a rainbow waving, three-quarter-length trouser-wearing lesbian.

Bend It Like Beckham has just celebrated its 20th birthday

This is the first and only time I have seen baby queer desire, lust, longing and confusion on screen from a South Asian protagonist. Believe me, I have looked.

Twenty years on from film’s debut, and Bend It Like Beckham remains revolutionary for exploring themes of women in sport and the roles and expectations of South Asian women in society. The one element that I have to grin and bear is that the storylines are not explicitly queer. But LGBTQ+ themes are not entirely absent from the film.

Jules’ iconic line: “Just because I wear trackies and play sports does not make me a lesbian,” is, of course, true. But I play football for Goal Diggers, a grassroots club for women and non-binary people, and although not all of our players are part of the LGBTQ+ community, a high percentage of them are, so the stats are not on your side, Jules. And which of us sexually confused ‘tomboy’ kids have not used that line before on their parents? I know I have; I’ve said it word for word. Plus, Jules is always sporting a bandana, which, as we know, is the 00s version of a carabiner – aka very queer.

The other explicit reference to same-sex attraction is when Jess’s best friend Tony comes out. She accepts him with open arms. Granted, accepting your LGBTQ+ friends seems like the bare minimum, but in South Asian culture, homosexuality is still very taboo, even in 2022. The BBC’s Asian Network conducted a survey in 2018 which showed only 44% of British South Asian 18-34-year-olds deemed same-sex relationships as acceptable. Compare this with wider British society in the same age group, who boost that figure to 81%. From lived experience, I don’t believe much has changed in the last four years.

So, maybe exploring a story of same-sex attraction would have pushed too many boundaries in the early 00s. Maybe it would have alienated audiences too much. Maybe my parents would have thought it was inappropriate for me to watch it at such a young age had Jess and Jules been the forward power couple I know them to be. Maybe to get the canonically queer film in cinemas, on TV and now on streaming services, the film needed to play it safe.

It takes a lot for me to ignore the forced kiss between Jess and her coach, Joe, at the end of the movie. There are a lot of issues I have with the relationship between them; the first being that they have no chemistry, the second being the weird power dynamics and noticeable age gap given that Jess is doing her A-levels and Joe is a whole grown-up man.

But the most important problem I have with it is that Jess is gay. At that point, I would rather look at the ceiling, which is probably what I did when I was six and thought kissing was gross, full stop.

The events that unfold in the movie don’t detract from it’s queer potential, though. Interestingly, Keira Knightley has herself given the seal of approval to an explicitly lesbian sequel. When told by Pride Source that a lot of LGBTQ+ people had wanted Jess and Jules to become a couple, she exclaimed: “F**k yeah! That would’ve been amazing. I think they should’ve been too. I think that would’ve been great. We need a sequel.”

Writer-director Gurinder Chadha, rather promisingly, has also suggested that she’s open to it. In an interview with feminist sports podcast Burn It All Down, she mused that a love story between Jess and Jules is “definitely one way the story could’ve gone”.

“There’s no reason why that other story wouldn’t be just as valid,” she explained. “Maybe, who knows, if we ever do a sequel…”

In any case, a moment of redemption arrives at the end of the movie, when Jess leaves Joe to pursue her dream. Together with Jules, the ‘friends’ get on a flight together to travel halfway around the world to continue their footballing careers and their relationship, away from watchful eyes. Point proven.

*I’m non-binary but didn’t have the language to express this at the time.