When a nurse living on the Upper West Side checked an app for neighborhood bulletins last fall, she learned about the recent discovery of a Jacob Lawrence painting in an apartment a few blocks away. It had turned out to be one of five panels long missing from the artist’s groundbreaking 30-panel series “Struggle: From the History of the American People,” which was on view at the Metropolitan Museum of Art, right across Central Park.

She walked over to look more closely at a small figurative painting on her dining room wall, where it had hung for two decades, its signature barely legible. It was a gift from her mother-in-law, who had taped a 1996 New York Times profile on Lawrence to the back. The nurse, who had only glanced at the back while dusting, learned from the app that Lawrence was a leading modernist painter of the 20th century — and one of the few Black artists of his time to gain broad recognition in the art world.

Could lightning strike twice in just two weeks’ time? The woman told the story to her 20-year-old son, who had studied art in college and quickly Googled the Met’s exhibition. He found a murky black-and-white photograph of their very painting being used as a place holder for Panel 28. It was titled “Immigrants admitted from all countries: 1820 to 1840—115,773,” and the wall label read: “location unknown.”

“It didn’t look like anything special, honestly,” said the owner, who is in her late 40s and arrived in New York from Ukraine at 18. “The colors were pretty. It was a little bit worn. I passed by it on my way to the kitchen a thousand times a day,” she said in a phone interview.

“I didn’t know I had a masterpiece,” she added. 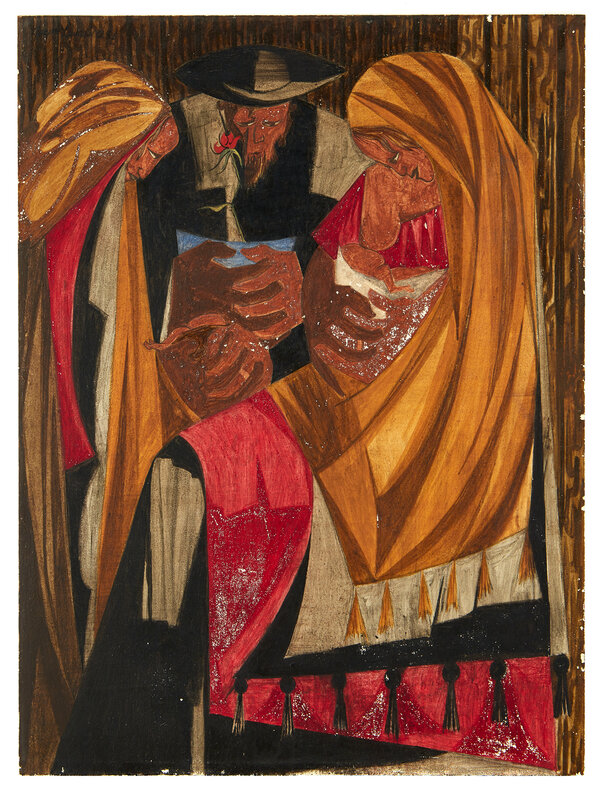 After she had connected the dots, she called the Met, but her messages went unreturned. By day three, her son suggested they just head over on his motorbike. His mother recalled: “I grabbed a young kid at the information desk in the lobby and said, ‘Listen, nobody calls me back. I have this painting. Who do I need to talk to?’” Eventually, an administrator from the modern and contemporary art department met them downstairs and asked the owner to email her photos of the work — which she did on the spot, from her phone.

By that evening, Randall Griffey and Sylvia Yount, the co-curators of the Met’s Lawrence show, and Isabelle Duvernois, the Met’s paintings conservator, were making their second trip to an Upper West Side apartment in the space of two weeks to verify the authenticity of a Lawrence painting that had not been seen publicly since 1960.

The nurse, who has agreed to lend her painting for the last two stops of the traveling exhibition, was granted anonymity because she said she was concerned for her family’s security living with a now-valuable artwork. The panel will debut March 5 at the Seattle Art Museum in “Jacob Lawrence: The American Struggle” and remain on view through May 23.

Before the discovery of Panel 16, first reported by The New York Times on Oct. 21, the Met’s team had known only the work’s title and subject matter — Shays’ Rebellion — but had no image to help authenticate it. Griffey recalled the revelation of the first panel as “a great bright spot” for him professionally and for the pandemic-weary city. “It turned out to be the feel-good story of the season in need of feel-good stories,” he said.

With Panel 28, they had a low-quality photograph of the work, which had been exhibited in the late 1950s at the gallery of Lawrence’s dealer Charles Alan.

The painting, in vivid red, gold and brown tempera on hardboard, shows two women draped in shawls flanking a man in a broad-brimmed hat, their heads bowed and oversized hands clasped toward the center of the image. The panel, evoking old-world travelers, was inspired by immigration statistics in Richard B. Morris’s 1953 “Encyclopedia of American History,” part of Lawrence’s exhaustive research on the foundational contributions of immigrants, Blacks and Native Americans to the building of the nation. (He refers specifically in the title to the number of immigrants who came to the United States during the early years of the 19th century.)

The “Struggle” series that he executed from 1954-56 stylistically interweaves Cubist forms in agitated compositions. It was a break with earlier work like “The Migration Series” (1940-41), painted with simpler blocks of color.

While Panel 16, dominated by a palette of brilliant blues and in pristine condition, could immediately join the traveling exhibition for its final days at the Met, Panel 28 had suffered some flaking and lost paint and needed conservation to stabilize it. Griffey passed the baton to his colleagues at the Peabody Essex Museum in Salem, Mass, where the show originated.

“We think Lawrence unknowingly used some bad tubes of paint because there are certain colors, including red and brown, where the adhesive quality seems to be faulty across works produced in 1956,” Lydia Gordon, coordinating curator of the exhibition at the Peabody Essex, said. The museum collaborated with the Seattle Art Museum and the Phillips Collection in Washington, the exhibition’s final stop, to pay for treatment of Panel 28 at ArtCare Conservation in New York.

When the new painting was unframed in the conservation lab, an alternative title, “The Emigrants — 1821-1830 (106,308)” became visible in Lawrence’s handwriting on the back. “He wrote the word ‘Emigrants’ with an ‘e,’ which we all thought was really interesting because that adds this idea of permanence to their arrival,” Gordon said.

The owner’s son was the first to point out that the curators’ description of Panel 28 in the wall text needed to be revised: What had looked like a prayer book in the hands of the male figure in the grainy photograph was actually a flowerpot with a red rose, the official flower of the United States. A nursing baby in the arms of one woman in the painting had been entirely obscured in the black and white reproduction.

“We’re now able to see so much more of this tender hope and optimism — this symbolism of fragile life growing in the new place for these people that have emigrated,” Gordon added.

“Struggle” was the only one of Lawrence’s 10 series that had not been preserved intact. Public institutions weren’t receptive to his expansive and racially integrated narrative of American history in the 1950s. “We know from the archive that his dealer Charles Alan wrote all these letters to major institutions and no one wanted to touch it,” said Gordon.

After exhibiting the series twice at his gallery, Alan sold “Struggle” to William Meyers, a New York collector who quickly dispersed the panels. Griffey, the Met curator, speculated that Meyers may have offered Panel 16 to the local Christmas art auction where the Upper West Side couple (who also requested anonymity) had purchased it in 1960 for about $100.

The owner of Panel 28 doesn’t know how her mother-in-law, who immigrated from Poland, raised her family on the Upper West Side, and amassed an eclectic array of inexpensive artworks, acquired the painting. “I have a feeling my mother-in-law didn’t pay much more than $100,” she said. “Is there a possibility they were bought at the same auction? I think there’s a very good chance.”

When Lawrence’s catalog raisonné was published in 2000, the whereabouts of seven of the 30 panels in the “Struggle” series were unknown. The collector Harvey Ross, who in 1996 began acquiring the paintings still in private hands, was thrilled when his wife spotted Panel 3 — titled “Rally Mohawks!” — in a 2008 Christie’s auction.

Ross has lent his 15 panels of “Struggle” to the exhibition and intends to work with scholars developing an educational curriculum based on the series.

The nurse who owns Panel 28 said she would consider selling it. (The couple that owns Panel 16 is not interested in selling at this time, according to Gordon, the Peabody Essex curator.)

Panel 14, Panel 20 and Panel 29 remain at large. The Peabody Essex has set up the email [email protected] to make it easier for people to share information. Gordon is pinning her hopes on the huge community of Lawrence’s former students and supportive gallerists and curators in Seattle, where the painter lived for the last three decades of his life after leaving New York.

“Oh, we’re totally going to find them!” she said firmly.

Residents of the West Coast, check your walls on the way to the kitchen.