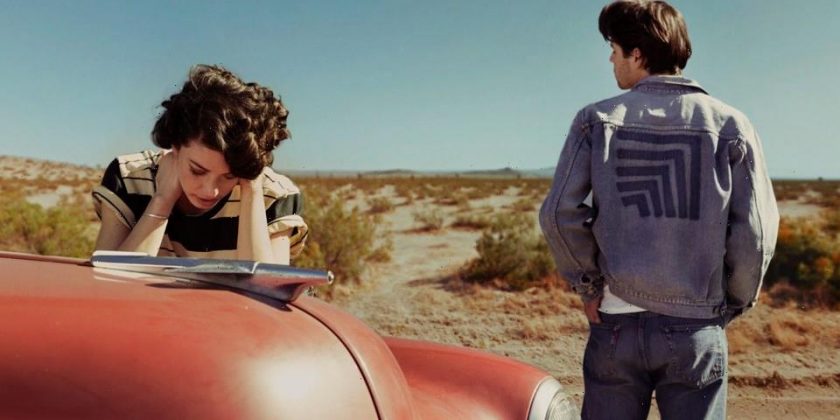 Levi’s vintage fall/winter 2021 collection is reminiscent of the rebellious 1950’s and ‘60s American teenagers. Titled “The Shocking Truth,” the new collection derives its inspiration from the hyper-stylized teenage B-movie posters. The collection came to life through a number of jackets, pants, tops and a lot of denim.

For both men and women, the collection features a range of graphic knit tops, which include bold geometric patterns. The collection also includes several denim trucker jackets. One being the Type II Long Trucker Jacket, which boasts an elongated body in dark blue denim. The highlight of the men’s jacket offerings jacket is a red satin bomber with a sherpa collar, titled the Climate Seal jacket,  for an inherently 1950’s touch. Rounding out the men’s jackets with a daring punch is an all-over cheetah print button-up jacket.

Women’s outerwear takes form in a couple of casual yet refined pieces. The main women’s jacket is a black and red satin bomber with an embroidered crying cat on the back, which matches the Climate Seal Jacket. Next up is a wool duffel coat in an eye-catching calla green.

The collection also revives the 1960 501 jeans. The 1960’s cut is made from red selvedge denim and features a wider leg for a relaxed fit. Besides the 501 jeans, the offering includes the 1920’s Balloon, which is a pair of extra wide-leg jeans.

“The concept this season is all about teenage exploitation movies happening in Hollywood during the ’50s and ‘60s, and how they were selling something that didn’t exist. They were advertised as crazy, wild movies, but then they weren’t at all what they were hyped to be,” said Paul O’Neill, design director for Levi’s Vintage Clothing. “The posters were amazing, but the movies were not very exciting. So we took inspiration from the posters—the vivid images, the bright colors and graphics—and created a collection as if Levi’s had produced the wardrobe. Everything is exaggerated and hyper-real, as if the movie posters had come to life.”

The collection makes its debut Friday, August 13 in-store and on Levi’s website.