‘They Are Our Government’

President Trump is under fire for a series of tweets about four young congresswomen of color — Representatives Ilhan Omar of Minnesota, Alexandria Ocasio-Cortez of New York, Rashida Tlaib of Michigan and Ayanna S. Pressley of Massachusetts — in which he said the progressive Democrats (often referred to as “the squad”) were “loudly and viciously telling the people of the United States” how to run the government, and that they should “go back and help fix the totally broken and crime infested places from which they came.”

“This is beside the point, but three of the congresswomen you’re attacking were born here and they’re all American citizens. So if you’re asking them to fix the totally broken, crime-infested governments of their home countries, they’re trying.” — SETH MEYERS

“And what does he mean, they’re telling us how our government is to be run? They’re in Congress — they are our government.” — STEPHEN COLBERT

“Meanwhile, Melania was like, ‘Hey, how come they get to leave?’” — JIMMY FALLON

“And is there anybody Trump does think was born in America? [Imitating Trump] Bring me Megan Rapinoe’s long-form birth certificate, O.K.? There’s no way an American could be that good at soccer, O.K.?” — STEPHEN COLBERT

The late-night hosts said the president’s tweets were proof of Trump’s racism.

“You know, it’s almost like, in Trump’s head you can’t be a person of color and an American, which is strange because he of all people should know that you can be two things at the same time. Yeah, I mean, he’s bald and has a full head of hair. It doesn’t make sense, but we accept it.” — TREVOR NOAH

“I don’t know what’s more shocking, that the president sent a racist tweet or that we won’t be talking about this in two days.” — JIMMY FALLON

“Of course, Trump does not like the squad. He is the leader of the rival gang, the Klan.” — STEPHEN COLBERT

“That’s right, New York City was crippled: The subway wasn’t working, there was chaos in the streets, people were driving like maniacs and then the power went out!” — STEPHEN COLBERT

“At the Plaza Hotel, the lights went off right before a couple exchanged vows. Even worse, the bride had just said, ‘God, if this is a mistake, please give me a sign.’” — JIMMY FALLON

“Much of the West Side of Manhattan was powerless, and not the kind of powerless New Yorkers are used to, like when a rat bites you and now it’s legally your roommate.” — STEPHEN COLBERT

“But this is New York City, so New Yorkers rallied and managed to keep calm — then everyone’s phone battery reached 5 percent and all hell broke loose.” — JIMMY FALLON

“And then five minutes later everyone went right back to not speaking to each other ever.” — JIMMY KIMMEL

Stephen Colbert joined Jimmy Fallon on “The Tonight Show” and the two re-created the “Neverending Story” duet from Season 3 of the Netflix series “Stranger Things.”

What We’re Excited About on Tuesday Night

Jennifer Lopez will stop by “The Tonight Show” on Tuesday, where she is likely to talk about the blackout’s halting of her Madison Square Garden concert. 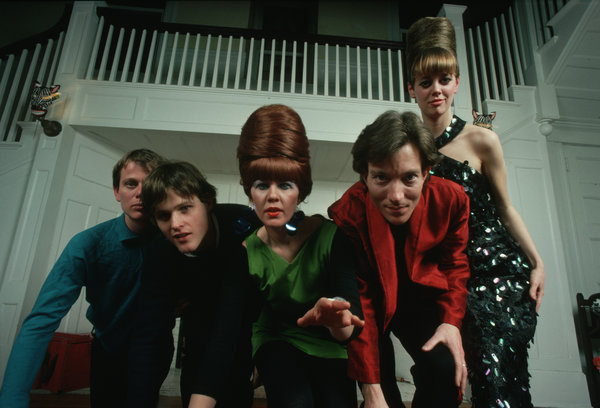 The B-52s are so much more than “Love Shack,” as illustrated by this audio guide to the kitsch-pop band’s lengthy career.