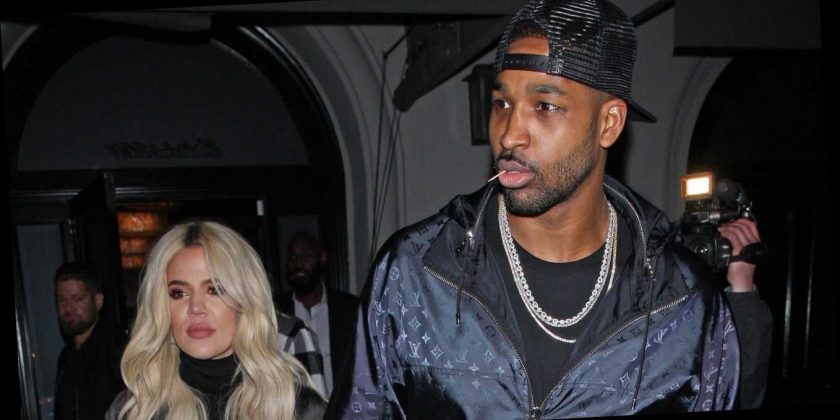 Just friends! Khloé Kardashian grappled with what to do with her ex Tristan Thompson after he gifted her a diamond necklace as well as an enormous diamond ring on the Sunday, December 1, episode of Keeping Up With the Kardashians.

“Right now, the most I can handle is a coparenting relationship. … Tristan wants more than that,” Khloé revealed in a testimonial interview. The mother of True Thompson, 19 months, was surprised to find a diamond necklace from Tristan waiting for her in her hotel room during a club appearance in Connecticut. Khloé’s best friend, Malika Haqq, had helped Tristan with the delivery of the gift. Malika, who joined Khloé during the club appearance, revealed, “[Tristan] asked for help to surprise you with something. … He wanted to give you something, do something nice for you.”

When Khloé confronted Tristan about the gift, she thanked her ex for his generosity and then added a salty quip: “You weren’t this nice to me when we were together. Ever.”

A few days later, on the morning of her 35th birthday, Khloé revealed another gift from her ex who publicly cheated on her two times, an enormous diamond ring. Khloé explained to Scott Disick that she initially said “no” when the ring was presented, adding that Tristan referred to it as a “promise” ring. Khloé explained that, while the ring was nice, she was more grateful for the card, saying, “It was the nicest, longest card, and it was in his bad handwriting.” Scott then told Khloé she was being too “hard” on Tristan and that his cheating scandals were “not the first time somebody has messed up, a.k.a. every single athlete on the planet.”

After a star-studded birthday celebration thrown by sister Kylie Jenner, Khloé recounted a conversation between herself, Malika, and rapper O.T. Genasis saying, “Malika and O.T. were like, ‘I don’t think it’s over with you and Tristan.” Khloé, however, dismissed all thought of a romantic reconciliation saying, “There’s really nothing romantic between Tristan and I.” She later added, “Tristan is really trying to show he’s sorry on a daily basis. … We’re slowly moving into the right direction of being friends as well as excellent co-parents.”

The episode also followed Khloé’s unconventional birthday gift of three identical puppies, given to her by momager Kris Jenner. Khloé confessed that while the puppies were adorable, she insisted on immediately rehoming them because, “I just moved back into my house.” Khloé added, “I’ve done my research … they’re going to people who will love and adore them.”

While Khloé was grappling with an onslaught of jewels, Kim and Kourtney Kardashian showcased a devastating cause, the fight against the damage wrought by the Santa Susana Field Laboratory. The Simi Valley area laboratory has been said to cause cancer due to toxic soil. Kim and Kourtney met with cancer survivors as well as parents of the 54 children who’ve been diagnosed with cancer in one single nearby community. The toxic soil almost hit close to home for Kim, who stopped husband Kanye West from getting office space near the lab. Kim recounted telling the rapper, “Simi Valley? That’s right next to the Santa Susana Field Laboratory. You can’t have an office in Simi Valley.”

Keeping Up With the Kardashians airs on E! Sundays at 9 p.m. ET.