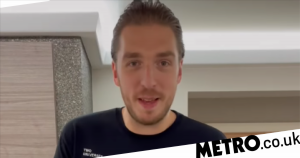 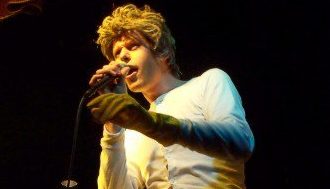 It looks like Kunt and the Gang has some serious beef with LadBaby judging by new lyrics from the band.

The musical comedian, whose songs include the likes of Prince Andrew Is A Sweaty N*nce and Boris Johnson Is Still A F*cking C*nt, appeared to take aim at the artist, real name Mark Hoyle, in his latest track.

Kunt and the Gang shared the lyrics of the song on social media, which seem to refer to LadBaby, whose novelty hits include Sausage Rolls For Everyone and I Love Sausage Rolls.

The post was captioned: ‘Just working on some lyrics for the Christmas single remixes… #AnyoneButThem.’

While Kunt and the Gang didn’t directly refer to LadBaby, many fans were amused nonetheless.

‘I wonder who he’s talking about?’ one asked, while another wrote: ‘Grab the popcorn.’

Kunt and the Gang told Metro.co.uk that he likes to keep his lyrics ‘open to interpretation as to which seedy fanny rat sausage roll charity millionaire I’m referring to.’

He continued: ‘That said, it’s one who wasn’t a millionaire before he started making charity records and who has used food banks, hunger, and despair to hawk downloads and flog sausage roll-related tat.

‘This Sausage Roll C*nt Mix is going to be one of the alternative versions of The Kunts’ 2022 Christmas single Fuck The T*ries which is released on December 16.’

Of course, LadBaby made chart history last year after securing the Christmas number one for a fourth consecutive year, becoming the first musician to do so in the 70 years of the Official Christmas Chart.

The social media star and his wife Roxanne, also known as LadBaby Mum, scored the top spot with the novelty track Sausage Rolls For Everyone, which featured global superstars, Ed Sheeran and Sir Elton John.

The song, a sausage roll-themed charity rework of Sheeran and Sir Elton’s own new festive single Merry Christmas, was made in aid of The Trussell Trust food banks.

The milestone means LadBaby surpasses music titans The Beatles and Spice Girls, who are the only other acts to score a consecutive hat-trick of festive number ones.

The track, which was released on December 17, proved to be a huge success, achieving more than 136,000 chart sales in its first week, according to the Official Charts Company.

LadBaby began his theme of food pun-based chart-toppers in 2018 with We Built This City, and then went on to claim further success in 2019 with I Love Sausage Rolls and 2020’s Don’t Stop Me Eatin’.