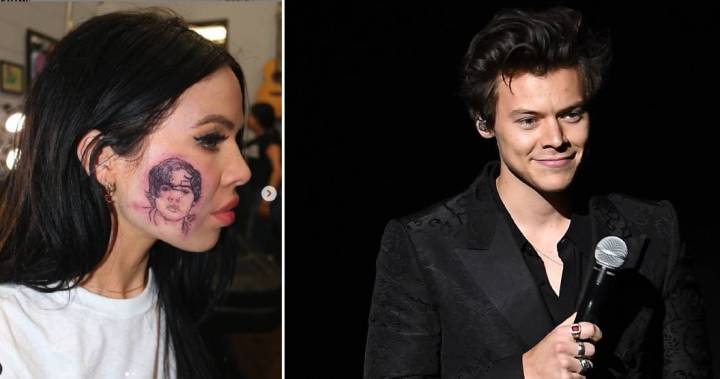 Kelsy Karter has revealed that her face tattoo of Harry Styles was a publicity stunt.

In a YouTube video posted on Jan. 31, the New Zealand-born singer said that her face ink was fake. The video is titled: “How I rocked the entire world for $300.”

She announced it was part of a promotional stunt for her new single, Harry which was released the following morning.

Apparently, the idea was created after weeks of “going back and forth, arguing, debating, crying and a lot of yelling.”

“[Romeo] traced Harry‘s 2017 Rolling Stone cover, applied it to my face, and then a special FX makeup artist did her thing,” she said in the clip. “BTW: We know it looked ridiculous. That was the point.”

“I woke up the next morning. Our plan was working,” Karter said as news headlines began to show on the screen.

She continued: “Every major publication and news outlet in the world covered the story and more importantly the song [Harry].”

“This has always been about rock and roll,” Karter wrote.

“The tattoo is gone. All that’s left is the music. Which is what my rockstar team and I had planned… all along,” she concluded.

Earlier this week, many people on social media accused Karter of using the fake tattoo as a publicity stunt for her new music.

When speaking to i-D in July, Karter revealed what she liked most about Styles.

“What I love about him from a professional standpoint is that he was the poppiest of popstars, and then he went off on his own and made a classic rock album,” she said.

The 24-year-old singer continued: “For someone like me who wants to live in that world who hasn’t been in a boy band, he has opened the door for me. He’s introduced the kids to the kind of music I want to make. For that, I’m really grateful.”

She said she also just wants “his career.” “I feel like I’m a female version. I actually moved to America to act, and music became my main thing. Rock ‘n’ roll is my passion. I really want to work with him. Let’s work, Harry. Where you at? Mark my words: I’m getting a song on his album,” she said.

As of this writing, Styles has not publicly addressed the tattoo.