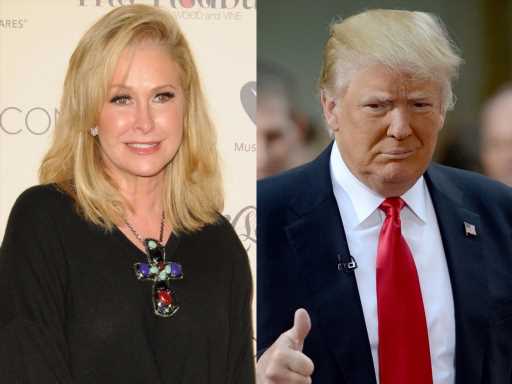 Kathy Hilton had a fun time on Sunday at a Super Bowl party held at Donald Trump’s Mar-a-Lago residence in Palm Beach, Florida, but not every Real Housewives of Beverly Hills cast member is pleased about it. Lisa Rinna called out the socialite for skipping out on the finale filming day for the 12th season.

Kathy didn’t post any images from her time at Trump’s football fiesta, but plenty of fans posed with the reality star and posted it on their social media accounts — and her husband, Rick Hilton, made it obvious they were there with exterior shots of the property’s golf course. Rinna, who has reportedly have been at odds with Kathy the entire time they’ve been filming the upcoming season, used the opportunity to hit her with one more dig. Using a snapshot of Kathy at Mar-a-Lago from the Twitter account PatriotTakes, she wrote on her Instagram Story, “Oh that’s where she was!!!!!,” per ScreenRant. So far, no shots of Kathy and Trump have emerged in this post-Super Bowl melee.

The Hilton-Trump relationship shouldn’t come as a surprise to anyone who has followed the New York City social scene over the last four decades. The families have run in the same circles and been close family friends for years. Even daughter Paris Hilton admitted to the Australian show, The Project, in 2016 that she gave her vote to him in the presidential election. “I’ve known him since I’m a little girl, so yes [I voted for Trump],” she revealed. And let’s not forget that he wrote a blurb on the back of her 2004 book, Confessions of an Heiress: A Tongue-in-Chic Peek Behind the Pose
. “I have known Paris Hilton for much of her young life and have always recognized her as a great beauty,” Trump wrote, via Us Weekly. “What people don’t know is that she is a great beauty on the inside as well.”

As for Kathy, her trip to Palm Beach had been in the works for weeks, so she didn’t skip the finale filming, according to her manager, via RadarOnline. “Kathy did not refuse to film,” they said. “Our friend, Vera, lost her husband a year ago last week. Vera lives in Palm Beach. Kathy and Rick have always planned on being in Palm Beach this weekend with her for the week.” And yes, they took the time to hang out with Donald Trump.