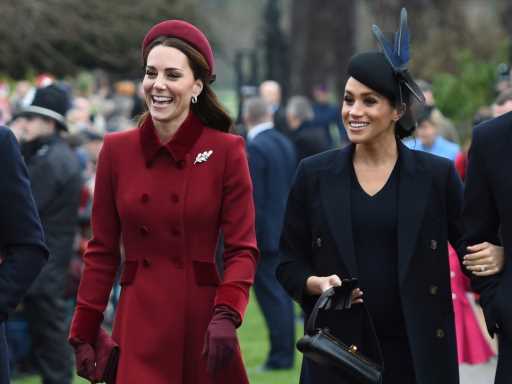 While the British media have played up the rivalry between Kate Middleton and Meghan Markle for years now, a new book is shedding some light on the fact that they really do have kind things to say about each other behind closed doors. Christopher Andersen’s Brothers and Wives: Inside the Private Lives of William, Kate, Harry, and Meghan, gives a deeper dive on what the Duchess of Cambridge allegedly said, according to sources, about Meghan leaving the royal family.

In an excerpt obtained by SheKnows, Andersen revisits the moment William and Kate found out about Prince Harry and Meghan’s exit from their senior royal roles. “What the f**k do Harry and Meghan think they’re doing?” William asked, per the excerpt. “My father will be furious.” And Kate added, “Not to mention your grandparents.” While that time had to be shocking for everyone in the royal family because it was such an unprecedented move, the Duchess of Cambridge noticed something about Meghan in a photo of her at Canada House just hours before the announcement.

Andersen described Harry as “beaming” and his wife as “equally radiant” in that image and claims that is what Kate noticed, too. “What a lovely outfit,” she said of Meghan’s brown turtleneck and skirt with a complementary camel coat. “Well, they certainly do look happy.” If anyone knows how hard it is to be a royal coming in as an outsider, it’s Kate. She had her own struggles acclimating to the royal family — and she has the pressure of one day becoming the queen — so in many ways, she gets what Meghan went through.

So while William and Kate have a very clear path to the throne, Harry and Meghan had options. They took a path that might look drastic to the royals, but it’s a journey that is paving a road to happiness for the Sussexes — and it sounds like Kate understands why they did it.

Before you go, click here to see things you never knew about Kate Middleton before she met Prince William.