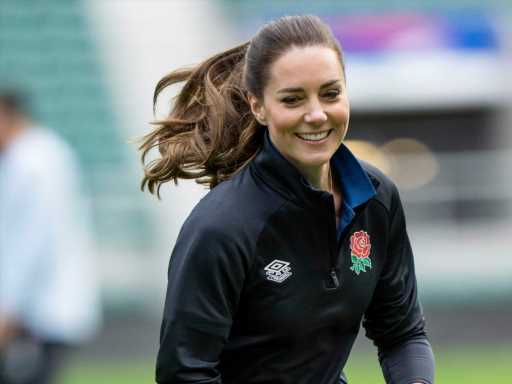 Kate Middleton had an absolute ball in her first appearance as the new royal patron of the Rugby Football Union and Rugby Football League, a role she inherited after Prince Harry stepped down. While some may have questioned why Kate took over the position versus husband Prince William, she is quieting the critics on her first day on the job.

The palace shared action shots of the Duchess of Cambridge, enjoying a training session at Twickenham Stadium, where she met athletes, coaches and referees, who are preparing for the upcoming Six Nations Championships. (See the photos HERE.) Wearing a black tracksuit adorned with an embroidered rose, Kate ran around the field, threw the ball and participated in a line-out play, where a player is hoisted up in the air by their teammates to receive the ball after it goes out-of-bounds — it looks like she had the best day ever from the images. 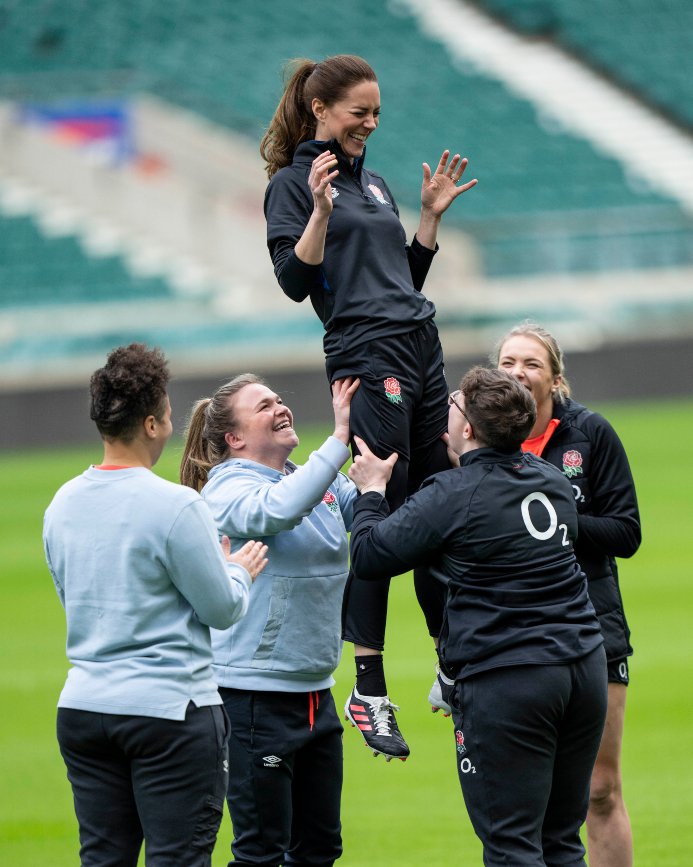 Besides hoping to support and encourage more women to join the sport of rugby, Kate is also drawing upon family memories, where it was a big part of her childhood. Her sister, Pippa Middleton, reminisced what those days were like in a 2014 Vanity Fair article. “Rugby was a big thing for our family, and the focal point was international matches, which were often played on Saturday afternoons and were as much social as sporting occasions,” she wrote. “We’d plan our weekends around the big matches, a quick bite to eat at halftime or lunch on our laps, typically a chicken pot pie or something equally cozy and English. If we lost, my dad would be in a state of despair for the rest of the afternoon, as if he’d actually lost the game himself.”

It looks like the royal family made the perfect choice in giving this patronage to Kate — she embodies the role with a fresh new perspective that also harkens back to her days as an athlete. It’s not only an exciting way for the Duchess of Cambridge to expand her royal presence, but also to inspire a generation of young girls to take up the sport of rugby.

Before you go, click here to see things you never knew about Kate Middleton before she met Prince William.