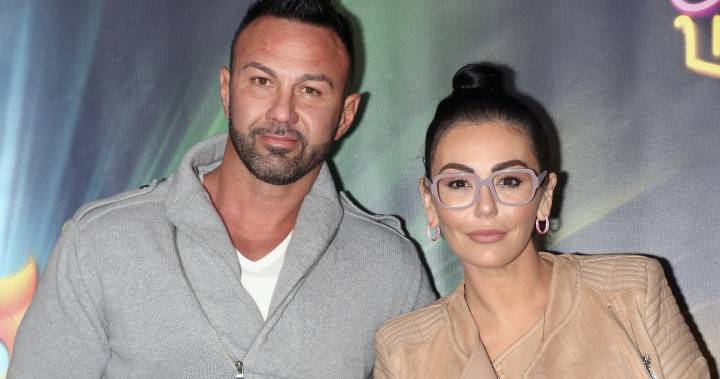 NOTE: This article contains sexual and offensive language and may be triggering for some readers. Please read at your own discretion.

Jenni (JWoww) Farley has posted videos that seemingly shows her estranged husband Roger Mathews throwing her to the ground.

The Jersey Shore star also posted a lengthy letter to Mathews on her website, which details the alleged abuse she and her family have had to experience with Mathews.

Footage from one of the videos Farley posted, which she alleges Mathews is attacking her. (JenniFarley.com)

In the videos taken by Mathews, he admits to having an affair with another woman, whose husband allegedly beat him up. He goes on to claim it was worth the fight because the woman was “smoking hot.”

She claimed that Mathews had planned to blackmail her with a two-year-old video of herself throwing a vacuum and other items in his direction, while he was holding their then-six-month-old son Greyson, who can be heard crying. She posted this video to her website.

“Your intimidation tactics with footage that you intend to show out of context are meaningless,” Farley wrote.

She also posted screenshots of a text message conversation between a nanny and herself in regard to Mathews.

“I have spent the last few months trying to protect our children from public humiliation, because as parents, WE ARE SUPPOSED TO PROTECT THEM,” Farley began.

“I wanted to handle this out of the spotlight because our silence is their greater good. Even when you tried to disgrace my name, make false accusations and even point-blank lie… I still remained silent as challenging as it was… why? Because, greater good,” she continued.

“I can no longer sit idly by while you mistreat and malign me in such an egregious manner,” the mother-of-two wrote. “You have presented yourself to the public as a praiseworthy father and a husband who has been suffering by my alleged actions and behaviour.”

Farley alleges that it was herself and their children, Meilani Mathews, 4, and Grayson Mathews, 2, who were “hurt” by Mathews’ actions.

“You are an abuser to the core, Roger Mathews. If this was not enough, you have spit at me, You have pushed me. You have shoved me. You have aggressively thrown me to the ground. You have prevented me from closing doors to escape having you come at me. You have belittled and disparaged me. You have threatened me,” Farley wrote.

She continued: “You have called authorities to falsely accuse me of harming our children hoping to get a leg up as leverage in a custody case, only resulting in our children having to be undressed and physically examined, being humiliated and investigated with naturally no substantiation of any abuse on my part. You claim to have suffered? Your actions are reprehensible. No real man would torture his family as you have. You are cruel and vicious.”

Im sorry that it has come to this. Find one human on planet earth who says I didn’t fight for my family. You will not find them. I will survive this storm and I am now dedicated to complete transparency so that justice may prevail in the end.

“Your actions have and continue to place the children in harm’s way. Stop, pause and have a true reality check,” Farley wrote to Mathews.

The 32-year-old reality TV star alleged that Mathews attempted to contact her former ex to get him to “intimidate” her. She wrote that Mathews knew there was a restraining order placed for her protection against her previous ex-boyfriend.

She said that Mathews teamed up with her ex, Thomas Lippolis, to extort money from her.

Lippolis was arrested in December and charged with third-degree extortion, the Tom’s River Police Department in New Jersey confirmed in a press release.

According to the press release, Farley claimed Lippolis attempted to extort US$25,000 from her “in exchange for not divulging secrets to the media.”

“It is unfathomable to me that because of you proactively contacting an ex-boyfriend of mine to team up against me, he was arrested for trying to extort money from me,” Farley alleged in her statement on Thursday.

“You didn’t stop there though. You persisted to try to take me down. You knew that another ex from my college years brutally beat me so badly that I was hospitalized.”

She attached a copy of a 2008 protection order against the ex whose name was blacked out.

“He was incarcerated for the violent acts against me,” Farley continued.

“When your own acts of domestic violence against me were questioned, you chose to reach out to this unspeakable person in order to intimidate me,” Farley alleged.

“Your attempt to bring this heinous person back into my life (the mother of your children) after he nearly murdered me speak volumes as to who you really are,” Farley wrote. “You are an abuser to the core, Roger Mathews.”

Farley also accused Mathews of contacting her bosses to “attempt to smear my name and hurt my public image.”

Statement is too long for Instagram. Link in bio. JenniFarley.com

Farley and Mathews were married in 2015 after nearly five years together.

She filed a restraining order against Mathews in December after the pair had got into an argument.

On Dec. 14, Mathews posted 3 videos while he was in the back of a police car. He said he called the police himself and after they left, he went out to record a podcast with a friend and then returned home.

After he went to sleep, he alleged he was woken up by police at 2 a.m. and taken from his house after they told him Farley had contacted a judge and filed a restraining order against him.

This is the level my ex wife takes it to after telling my kids their dad is a piece of shit and she’s sorry she ever had children with him. She gets so emotional and irrational in her anger this is the level she brings it too. Saddest day of my life watching her tell my daughter “she is sorry she had children with your daddy”. The truth will come out. The truth will set you free. I will never stop fighting for my kids.

Farley said she’s done her best to put on a brave face for their children.

“I clearly thought of us co-parenting well into the future as responsible parents should,” Farley wrote.

“So many of you may be understandably afraid to come forward, and have been stuck in abusive relationships for far too long just as I have been. If anyone is feeling down, broken, hurt or lost, please know that it is not your fault!” she wrote.

The 32-year-old mother filed for divorce in September.

If you or someone you know is experiencing abuse or is involved in an abusive situation, please visit the Canadian Resource Centre for Victims of Crime for help. They are also reachable toll-free at 1-877-232-2610.

Read the full letter below: