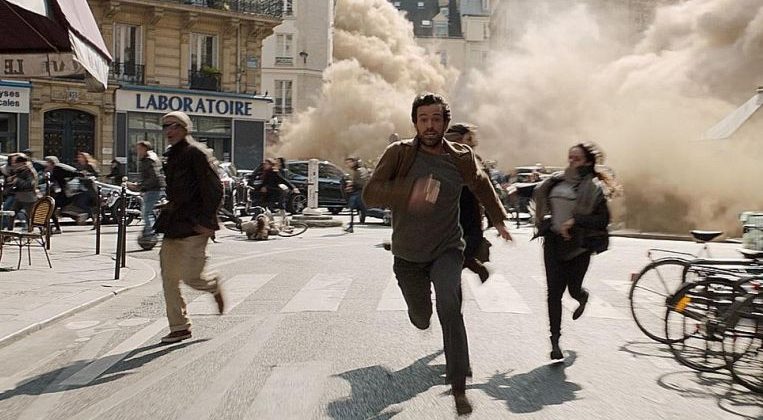 A gas of unknown origin seeps from beneath the ground, hugging the city’s lower levels. It is deadly to people and soon thousands, possibly millions, are dead.

A couple, lucky enough to be living in a flat above the gas layer, must use their wits to survive in a nearly empty metropolis in which necessities have become tough or risky to find.

That is not the plot of a Hollywood disaster movie or a description of the latest work of horror adapted from a Stephen King novel.

It is the synopsis of Just A Breath Away (2018, original title Dans La Brume), the opening film at this year’s French Film Festival.

It stars Olga Kurylenko and Romain Duris as the struggling couple, Anna and Mathieu. Both were in Singapore last week to attend the premiere of the film.

Speaking to The Straits Times at The Fullerton Hotel Singapore, the actors talk about how much of an anomaly Breath is – it is a science-fiction thriller, but set in Paris and stars French actors, speaking their native language.

Industry titans such as French film-maker Luc Besson, who is involved in major action-thriller franchises (The Transporter and the Taken series, and the Valerian And The City Of A Thousand Planets science-fiction fantasy, 2017) tend to cast global English-speaking stars in their films.

WHEN: Till Sunday, various times

Says Kurylenko, 38: “For France, Breath is in an unusual genre. The films made here are mostly dramas and comedies.”

The Ukraine-born actress, who moved to Paris in her teens to model and act, broke into English-speaking cinema in films such as the James Bond spy thriller Quantum Of Solace (2008), and later, in the Tom Cruise science-fiction work Oblivion (2013).

Duris says he was drawn to Breath because it was unusual to find a major-budget work, set in France, which does not fit into the usual genre categories.

Duris, 44, a heart-throb who has starred in a fair number of French dramas and comedies, says that the film shows how, even as death descends on the city, it comes not as a scene of horror or carnage.

“The fog can look beautiful,” he says, describing how the fog wraps itself slowly around the city’s classic 19th century low-rise apartment blocks.

Kurylenko says it will take a moment or two to adjust to seeing a disaster movie without skyscrapers in the background.

“We are used to seeing films like this set in cities with buildings like here in Singapore or in New York, but not in Paris,” she says.

The source of the fog is left mysterious. To Kurylenko, where it comes from is less important than what it represents.

“It’s a metaphor for what humans are doing to the planet, how we are destroying it,” she says.

Duris agrees, but he also believes the film is making a sharper point about European air quality, which he thinks is getting worse every year. But unlike the movie’s visible cloud, which kills on contact, real-life air pollutants are more insidious. They are far less visible to the naked eye and they kill slowly.

“Politicians make a lot of promises, but do nothing. Maybe they are waiting for a problem like the cloud in our movie to come,” he says.