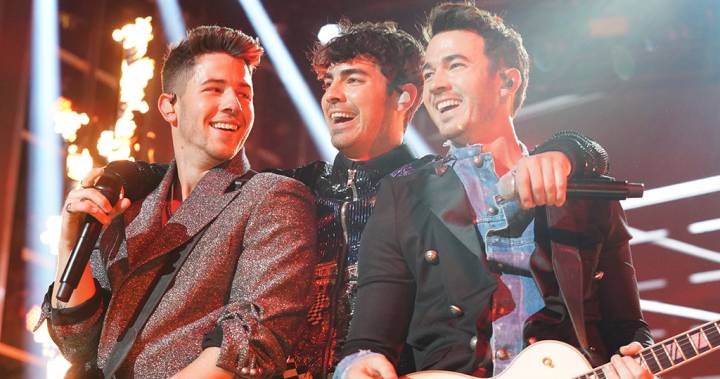 Not only are the Jonas Brothers set to embark on an extensive world tour later this year and release their first album in a decade, but they’ve just unveiled plans for a brand new documentary, entitled Chasing Happiness.

The announcement came on Wednesday night via YouTube, in which the trio Nick, Joe and Kevin Jonas, are seen together in an on-set dressing room exchanging banter with Amazon’s Alexa, before asking the A.I. when their documentary premieres.

“Alexa. Who is your favourite Jonas Brother?” asks Joe, 29. “I don’t have an opinion on that,” it responds. “Oh really?” asks Nick, 26. “Because Alexa, you look really, really beautiful today.”

Eventually, the brothers find out that Chasing Happiness premieres on June 4, exclusively through Amazon Prime Video.

The John Lloyd Taylor-directed film is intended to capture a deeper insight into the Jonas family as they once struggled to make ends meet before becoming a household name across the globe.

Chasing Happiness features an abundance of never-before-seen footage from the early days of not only the brothers’ careers, but their lives as well.

It also documents their sudden hiatus in 2013, their adventures as solo artists and then their eventual rekindling as not only a band but as siblings again and what came to be the inspiration behind the Jonas Brothers’ upcoming album, Happiness Begins (2019).

Already, the group has released two chart-topping singles from the record, Cool and Sorry — the latter of which marked the official comeback of the Jonas Brothers

The Happiness Begins world tour kicks off on Aug. 7 in Miami, Fla., and takes the boys throughout North America for 44 shows in 10 weeks.

The tour includes three Canadian shows — two in Toronto on Aug. 23 and 24, and one in Vancouver on Oct. 11.

Tickets for the Happiness Begins tour go on sale to the general public on May 10 at 10 a.m. ET.

Additional details and tour information can be found on the official Jonas Brothers website.

Happiness Begins is now available for pre-order. The album drops on June 7 — three days after the documentary release of Chasing Happiness.

** All additional and Canadian dates are bolded **