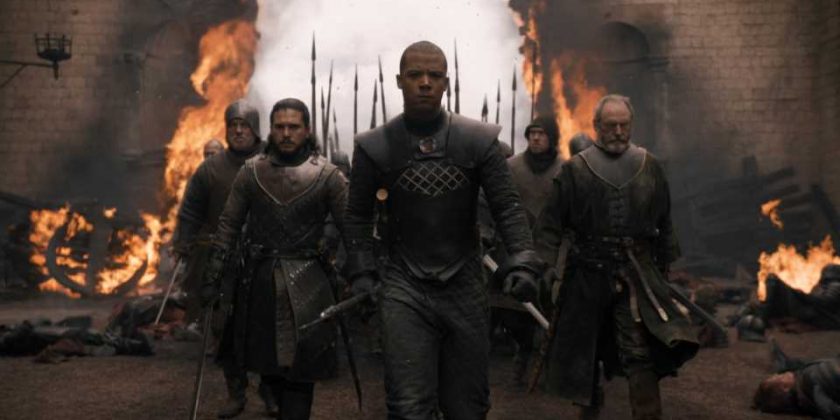 Warning: This article is dark and full of Game of Thrones season 8 spoilers.

Obviously, the biggest shock of last night’s penultimate Game of Thrones episode was Daenerys burning every inch of the Red Keep to the ground. But for many distraught viewers, a close second was watching Greyworm hurl a spear into a member of the Golden Company’s chest — moments after the army had surrendered. What followed was a tense few seconds between the leader of the Unsullied and a bewildered Jon Snow, who tried in vain to stop Dany’s army from attacking further. Once he was confident that Jon wouldn’t, or couldn’t, stand in their way, Greyworm carried on with the massacre — but fans are pretty sure that Greyworm and Jon have unfinished business.

It’s unclear whether Dany and Greyworm planned the decimation of King’s Landing in advance — but either way, once Greyworm saw Drogon continue the siege, he was more than ready to go with it. Jon, on the other hand, was devastated to see all those lives needlessly lost, and had expected his queen to halt the attack when the other side surrendered. There are a few possible reasons why Greyworm might be more gung-ho about this plan: notably, the recent loss of his love Missandei, who he saw murdered at Cersei’s behest. Either way, Greyworm had more personal motivation for wanting to see this place burned to the ground — and he seemed utterly determined to have the rest of Dany’s army join him in that goal.

To that end, Greyworm pauses his attack to look back at Jon, who is wildly, uselessly trying to pull the army back from attacking. He waits long enough to see Jon cut down an incoming Lannister soldier — cementing, perhaps, that Jon does not intend to switch sides — then continues on his way. But that loaded moment, where Greyworm is clearly assessing Jon’s loyalty to Dany, and no doubt finds it lacking, is a pretty clear lead-up to these two standing off in the finale.

There are a few ways this could play out: Jon, fearing for his life, may choose to not confront Dany directly — in which case Greyworm will certainly tell her about Jon’s attempts to pull the army back. At that point, Dany may ask Greyworm to kill Jon. Greyworm is pretty much Dany’s only friend at this point, with both Jorah and Missandei dead, and Tyrion and Jon clearly no longer on her side. Greyworm may also choose to go after Jon himself, indignant that Jon would betray their queen. Or, Jon could go after Greyworm directly: his horror at the atrocities committed by the Unsullied in the Red Keep was pretty clear.

Either way, with two warriors of this caliber on opposing sides in the finale, we’re sure to see at least one more epic stand off. Greyworm may have proven his loyalty to Dany, but he’ll have to choose what he’s really fighting for next week — as the dust clears from Dany’s attack, we’re still hoping for some remorse from the Mad Queen and her followers.