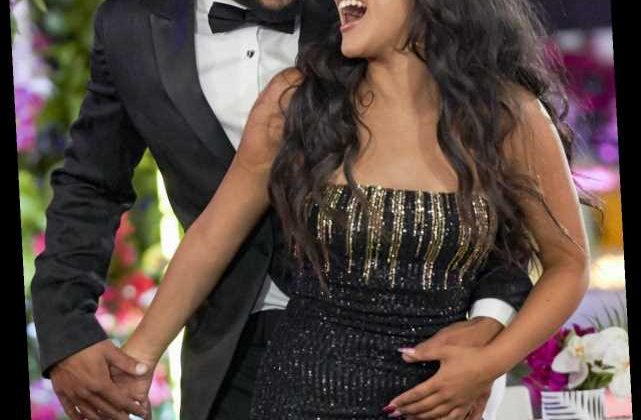 Despite facing bumps in the road (aka Casa Amor), Love Island Season 2 runners up Johnny and Cely are still together and feel "very very ready" to take on the outside world. "I’m just so happy to have privacy with Johnny now," Cely tells Bustle. "I was really looking forward to just getting to be with him off camera." Johnny agrees, adding that he’ll miss the Villa, but leaving "feels like somewhat of a relief just because of how emotionally draining it was."

Because they’re both members of the original Season 2 cast, it’s been six weeks since they’ve been in the outside world and spending time with family and friends. "Now we just go home and see family until we get to see each other again," Cely says. "But we already have plans to not be away from each other for too long." As they discussed on the show, Cely lives in California, and Johnny in Virginia. "We’re just going to kind of try and link up, meet up in LA," Johnny explains. "Literally maybe like a week from now, two weeks from now, we’re gonna be right back together."

Fellow islanders, family, and fans expressed concern about their long-term relationship, given the trust issues created by Johnny’s Casa Amor adventures with Mercades. But both Cely and Johnny insist that overcoming that obstacle made them stronger. "The challenges and everything, they were so stressful to get through, but every single time we got through them it’s made me feel so much more confident in myself and in me and Cely," Johnny says. "I definitely feel really strong with her. We’re definitely on the same page [about] everything moving forward, not really too worried about what people have to say." Cely agrees: "I have a boyfriend now [and] he’s literally the best human being ever."

If they do eventually get engaged, it’ll be difficult for Johnny to top his Villa proposal, that’s for sure.