‘Running Out of Friends’?

The first half of this week’s news cycle was dominated by Paul Manafort, the former Trump campaign chairman who’s accused of violating his plea deal — but whom President Trump said he would consider pardoning. Then on Thursday, another of Trump’s longtime confidantes, Michael Cohen, pleaded guilty to lying to Congress about Trump’s involvement in business discussions with Russians.

Jimmy Fallon said the president must be feeling the heat.

“It’s been a busy 24 hours for the president. Last night, Trump flipped on the Christmas tree lights, and today, Michael Cohen flipped on Trump.” — JIMMY FALLON

“I’m not saying Trump’s running out of friends, but today he asked Rosie O’Donnell if she wanted to get lunch.” — JIMMY FALLON

Trump accused Cohen on Thursday of lying in his confession. Stephen Colbert made fun of Trump with an impersonation:

“It’s terrible because this time, I’m not paying him to lie. O.K.? He’s lying pro bono. Before, I was paying him to say I never boned all those pros.” — STEPHEN COLBERT

Trevor Noah decided to try giving Trump’s team the benefit of the doubt, even as the Russia investigation continues to yield indictments and guilty pleas.

“Cohen is just the latest Trump associate to be caught lying to investigators, which raises the question: If Trump’s people aren’t trying to cover up any nefarious activities, why does everyone keep lying? Like, why are they all lying? Is there some super-innocent secret that they just don’t want Robert Mueller to know about? At the end are they just going to be like, ‘O.K. fine, Mueller, you want the truth? We were all planning a surprise birthday party for you. O.K.? You nosy bastard, here’s your cake.’” — TREVOR NOAH

Colbert and Fallon both had some fun with the news that Starbucks would be blocking Wi-Fi users in its stores from visiting pornographic websites.

“Starbucks is going to start blocking adult websites from their Wi-Fi network. They said there’s a time and a place for that type of behavior, and it’s all day at Dunkin’ Donuts.” — JIMMY FALLON

“With all the people involved, the Mueller investigation can be hard to follow sometimes. It’s like ‘Game of Thrones,’ but without the nudity, thank God.” — STEPHEN COLBERT

Claire Foy has a very random talent. (Note at the 1:30 mark that Black Thought, offscreen, appears to have the same talent.)

Here’s what Garth Brooks loved about Lady Gaga’s performance in “A Star Is Born.” 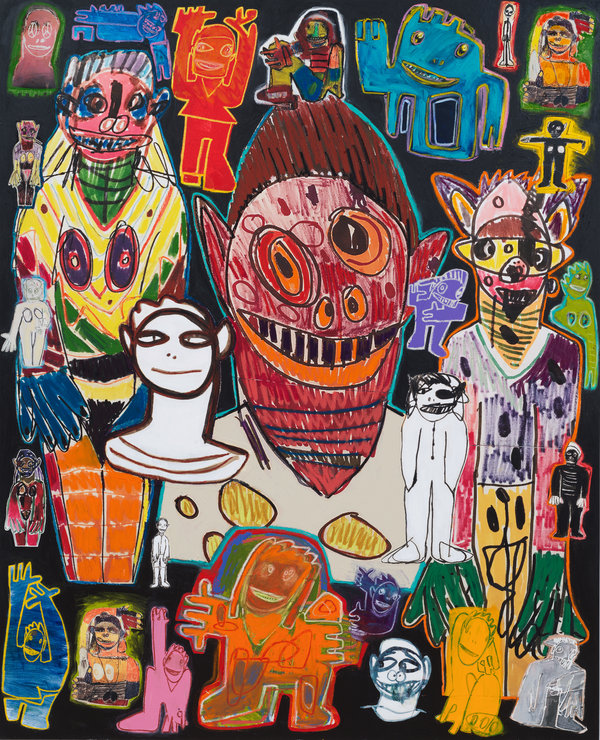 Richard Prince’s zany paintings have never been more fun to look at than the ones he’s making late in his career, our critic writes.