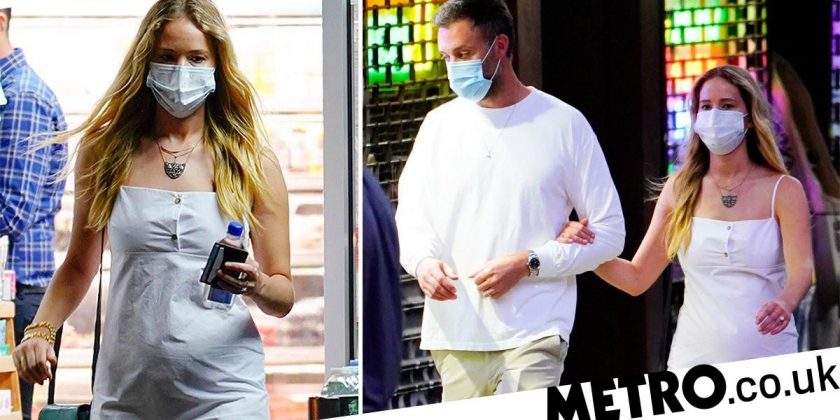 Jennifer Lawerence and her husband Cooke Maroney were seen making a rare appearance in New York, as they headed out together on a dinner date.

Jen and her man are known for being notoriously private when it comes to their relationship, but the pair were seen looking all loved-up as they stepped out in NYC recently.

The Hunger Games star kept things causal for her meal out and looked cute in a white strappy summer dress, while sporting her huge engagement rock.

She was masked up, as she headed out during the coronavirus pandemic, with Cooke following suit and wearing a face covering too.

Jennifer held onto Cooke’s arm as they strolled through the city, with the star stopping off to pick up a bottle of water.

Jennifer and art gallery director Cooke first began dating in 2018 – following her split from director Darren Aronofsky the year before.

She and Cooke tied the knot in October 2019 in a star-studded ceremony that saw Jennifer don a Dior bridal gown and celebrity guests including Adele, Cameron Diaz and Amy Schumer attend.

The couple had never publicly confirmed their engagement.

And it sounds like Jennifer always knew that Cooke was ‘the one’ as she previously told Entertainment Tonight that she knew she wanted to marry him, even though when they met she wasn’t ready to settle down.

‘He’s the greatest human being I’ve ever met. I wasn’t at a place where I was like, “I’m ready to get married,” I just met Cooke and I wanted to marry him,’ she gushed.

‘We wanted to marry each other, we wanted to commit fully. He’s my best friend, so I want to legally bind him to me forever.’

‘Fortunately, the paperwork exists for such a thing,’ she joked. ‘It’s the greatest. You find your favourite person on the planet, you’re like: “You can’t leave,” so I wanted to take that offer.’

She and Cooke, who is worth a cool $25million (£19m) thanks to his high-end gallery in New York’s Upper East Side, were first introduced by a friend of Jennifer’s over two years ago.