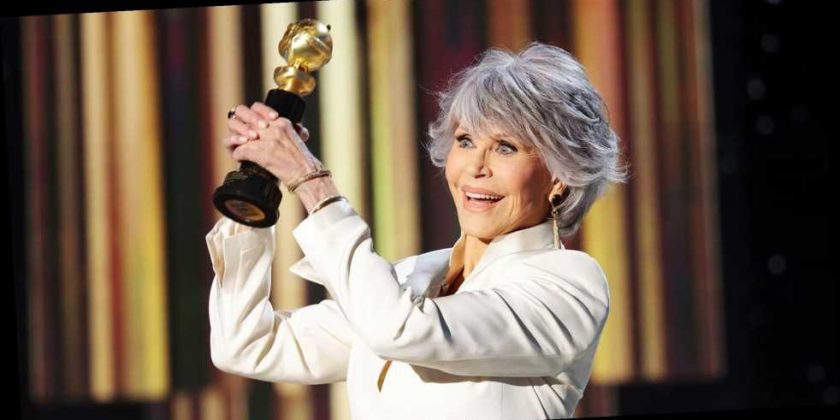 “I’m so moved to receive this honor. … We are a community of storytellers, aren’t we? And in turbulent, crisis-torn times like this, storytelling has always been essential,” said the actress, 83, in her acceptance speech. “You know, I have seen a lot of diversity in my long life and, at times, I have been challenged to understand some of the people I’ve met but inevitably if my heart is open and I look beneath the surface I feel kinship.”

The Cecil B. DeMille Award is given to those who have made outstanding contributions to the world of entertainment. Fonda was announced as this year’s winner in January, with members of the Hollywood Foreign Press Association applauding both her acting career and “unrelenting activism.”

“[Fonda’s] undeniable talent has gained her the highest level of recognition,” said HFPA president Ali Sar in a statement. “While her professional life has taken many turns, her unwavering commitment to evoking change has remained.”

Throughout her illustrious career, Fonda has made a name for herself as an actress, activist, fitness guru and author. A strong opponent of the Vietnam War, she was at one time blacklisted from Hollywood for her political outspokenness, returning to release numerous beloved films such as 9 to 5 and Monster-in-Law (as well as some iconic ‘80s workout videos) in the years that followed. A self-described feminist and staunch activist to this day, Fonda has been arrested multiple times. Her most recent arrest took place in December 2019 while protesting climate change in Washington, D.C.

In her speech, Fonda touched on how this year’s Best Motion Picture nominees helped her to see the world differently and encouraged her colleagues to continue expanding the stories they tell.

“Let’s all of us — including all the groups that decide who gets hired and what gets made and who wins awards — let’s all of us make an effort to expand that tent so that everyone rises and everyone’s story has a chance to be seen and heard,” the Grace and Frankie actress said. “After all, art has always been not just in step with history but has led the way. So let’s be leaders.”

No stranger to golden statues, the My Life So Far author has received seven Academy Award nominations and won two Oscars for her work in 1971’s Klute and 1978’s Coming Home. She’s been awarded seven Golden Globe Awards, the first being the now-defunct New Star of the Year award for 1960’s Tall Story.

Earlier in the evening, Fonda posted a video to her social media channels that showcased the star viewing the show on a monitor backstage. “I wanna know who’s won!” she explained. “I get starstruck when I see all these stars walking around!” She also posted a backstage clip getting mic’d up for her speech.

Past recipients of the Cecil B. DeMille Award include Morgan Freeman, Meryl Streep, Judy Garland, Sofia Loren, Lucille Ball and Barbra Streisand. Last year’s recipient was Tom Hanks, who accepted the award just over a month prior to becoming one of the first celebrities publicly diagnosed with COVID-19.

The Golden Globe Awards looked a bit different this year because of the pandemic. While most award winners gave their acceptance speeches from the comfort of home, Fonda was able to accept her award in person less than a week after receiving her second dose of the COVID-19 vaccine.