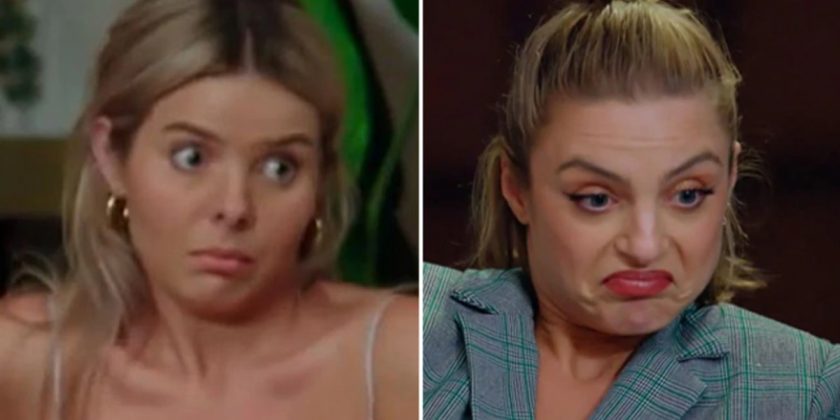 Wives attack each other and a glass is smashed in what is just a standard evening on Sunday’s Married At First Sight — but the real pay-off comes when we get a close-up shot of one husband’s high heels.

Rumours of a glassing incident have been circulating for weeks now. The groundwork for this altercation is laid in a fierce argument during tonight’s commitment ceremony before a sneak peek at Monday’s episode shows tempers — and Airbnb glassware — exploding.

While riveting, it’s the classic handiwork of Married At First Sight producers: over promise, under deliver. It happens every year. We’re promised a glassing but then it always falls short. We’re not surprised. The MAFS lunatics have zero follow-through.

First up on the couch at the commitment ceremony are Matt and Kate. It has been a week from hell that ended with Kate slagging off her husband to his face at the boozy dinner party.

Matt’s at the end of his rope after trying desperately to impress. He tells the experts about how he bought Kate some fancy Viktor & Rolf perfume and she turned her nose up at it, as if he’d just tossed her a bottle of Britney Spears Fantasy that he’d picked up on special at Chemist Warehouse when he ducked in there to buy a weird ointment.

Kate’s shocked at the judgment. “I think I’m usually quite polite and … I’m not rude to you,” she turns to her husband.

Kate, you’ve been acting like a total wet cat ever since we met you. At one point, when Matt offered you coffee, you looked at him like he’d just sprayed you with the garden hose. We thought you were gonna hiss.

The experts remind her of the things she said at the dinner party.

If you missed it, here’s a replay of one of her greatest hits: “I just think I’m starting to dislike him more every second, to be honest. He’s actually just starting to give me the sh*ts tonight. To be honest, after tonight, I don’t think I want to talk to him ever again.”

When flashback footage of your own bad behaviour is unearthed and replayed, there’s only one thing to do: cry.

Again, we refer to the hours of archived flashback footage showing a steady stream of insults.

This is when sex expert Alessandra steps in and basically tells Kate that if she doesn’t change, she’s gonna be single forever.

It’s a sobering realisation that becomes even more uncomfortable when Kate is then asked to reveal her decision and her card says: LEAVE.

But it’s a good thing Matt’s oblivious to social cues. He chooses to stay. Ya trapped!

Are you guys ready to mock Mitch?

Okay! So he rolls up to the couch with Ella and we rehash his tantrum from earlier in the week where he tried to quit because he hates — wait for it — being filmed by cameras.

Huh. I guess that explains the weirdly conservative turtlenecks he insists on wearing.

Mel Schilling smirks. “Well you’ve come into a really public experiment … What else is going on here?”

Mitch resists but then producers start dramatically pointing to the contracts he’s legally bound to, so he grits his teeth and mutters something.

How dare you, Mitchell. This is a reality show! Things don’t get more real than this. Not a day goes by where a wife isn’t stolen or a mild-glassing doesn’t occur.

“The other night, we sat down and had a conversation on camera and then, when I walked out, I had a cameraman on me, following my every move — following me down the staircase back to the other apartment. That just frustrated me so much,” he says.

Mmmhmm. Mhhhmm. Look, we’re all thinking the same thing here — but we’ll leave it to Schilling.

“I guess I feel the need to just jump in here with a bit of a reality check for you, Mitch,” she squints. “A camera following you is very much par for the course here.”

John Aiken gets a little jealous that Schilling got to dish out the sass, so he steps in to rouse on the entire group like a principal at school assembly.

“Using the experiment as a reason for your problems is a cop out,” he states. “If you can’t handle it in here as a couple, you’re not gonna make it outside in the real world. So when it gets a bit tough in here, if you want this relationship … SUCK IT UP.”

Then his speech turns weirdly passionate and producers add swirling violins in post-production.

“I know it gets tough, but couples have come through this, and they’re still together. Couples thrive after this!”

Yeah! You lunatics could be just like Cam and Jules, with their Metamucil endorsement deal! Who doesn’t wanna be the face of over-the-counter bowel supplements?

Ella raises her hand. “I’m a total believer in love from MAFS”.

Good girl! We see a Metamucil endorsement deal in your future. Or, if you’re lucky, haemorrhoid cream. Either way, there’s a lot of opportunities in the butt-products market.

Someone else who’s trying to escape is Samantha.

“We just don’t have deep conversations,” she says of her immature husband Al while holding back tears.

Oh shoosh, Samantha. We’re not gonna tolerate any more of this behaviour. You chose to take on the responsibility of being Al’s guardian and that’s not a role that you can just abandon on a whim. All new mums go through a period of mourning their old life. We get it. Yes, it’s annoying always having to remember to bring Al’s bib whenever you go out for a nice dinner together. And sure, he’s still learning to not scribble on the walls with your lipstick. But what are you gonna do — put him in a basket and leave him on a stranger’s doorstep?

When it comes time for decisions, she reveals through sobs that she wants to leave.

And as his wife breaks down next to him, Al is excited to reveal his card … with the decision written in bubble letters.

When it comes time for Dion and Carolina, we discuss the ups and downs of their week. Or, more accurately, the downs and lower-downs.

Dion tries to be positive and says there was a glimmer of hope when they danced together one night.

Carolina screws up her face. “You danced.”

“OK … I’m sorry,” Dion sighs. “I danced. But you were laughing and having a good time, weren’t you?”

“I was definitely laughing at you,” Carolina spits.

Schilling picks up a sword and approaches the dragon.

“Carolina, are you comfortable with the way you’ve been treating Dion?” she squints.

The response that comes is smug and sure. “Yes, I am, actually.”

Schilling’s eyes widen. “Really? You told him you were laughing at him while he was dancing, in a most nasty fashion. I would put it to you that the way you’re communicating with this man is disrespectful, rude, and downright nasty at times.”

This is really Schilling’s moment — and of course John Aiken gets jealous again. He decides to one-up her by pulling out his Burn Book and reading out observations about Carolina.

Well, Aiken, it’s not just the brunch issue. There’s something else. And we’re sure Carolina will inform you of it in five, four, three, two …

Look, we’re with Carolina on that last point. People who don’t drink coffee are so smug about the fact they don’t drink coffee. And they love pointing out the calculations of how much money we’d all save in a year if we stopped buying takeaways.

As the experts continue to mock Carolina for her outrageous demands in a husband, she whips out her go-to excuse: “I’m Latina! I have a temper!”

Without missing a beat, Schilling and Aiken turn their heads to Puerto Rican-born expert Alessandra.

“I was personally insulted with you trying to justify such nastiness on you being Latina,” she says. “As if Latina women were disrespectful. As a Latina woman, I can tell you, of course, we are feisty and very passionate. Never, ever disrespectful and nasty and demeaning.”

“It’s my second language too, ” Alessandra cuts her off. “I’m sorry, but no. Don’t even go there.”

It’s a tremendous moment that can’t even be stolen by John Aiken and his Burn Book.

When it comes time for the decisions, Carolina says perhaps the most wild thing we’ve ever heard come out of her mouth.

“It was a really hard decision,” she sighs.

Of course she chooses to leave. And Dion?

He’s clearly in a lot of pain. This marriage has been absolutely demoralising for him. But contracts are contracts, so ya both trapped. Besides, producers need to keep Carolina around so they can pursue the cheating storyline with Dan.

But the couples therapy session isn’t over. Dr Dom is back in the house tonight.

“That was pretty rude, Carolina. I was like, ‘f**k bro’,” she fires without warning. “Is that how you want to show yourself? I was bullied in high school and, I tell ya what, that is f**king disgusting behaviour.”

“I’m not gonna engage with you,” Carolina says, engaging with Dom.

We then have to watch Dom awkwardly stumble through unfinished comebacks and one-liners while Carolina lurches up from the sofa to storm out.

This is when producers cut to a wide-angle shot of Dion and we’re finally treated to a lingering view of his much-discussed high heels.

The sartorial distraction provides Dom with enough time to formulate another sentence.

“Clearly what she’s been doing for the past week is bullying, and I just called her out for it and she can’t deal with it. A person like that is just an a**hole,” she blurts.

This lures out Olivia — the show’s surprise mean girl.

“She was just held accountable by the three experts! Choose your words carefully before you start spitting them at people,” she spits.

“A person that’s a bully needs to be called a bully!” Dom shoots back.

Then Olivia basically says takes one to know one. “Bullying is a repeated behaviour, Dom, and we’ve seen you repeat this behaviour over and over again.”

And then they both make these faces:

By now, it has become abundantly clear that Olivia doesn’t like Dom. These public confrontations have happened before. And with tempers at a high, producers know there’s only one thing left to do: lock all the couples on a remote farm together with booze so the fights can get peak-ugly without the risk of noise complaints from neighbours.

And that’s exactly what’s happening tomorrow night. We get a sneak peak.

Footage shows Olivia sipping from a wine glass while yelling at Dom and then Dom screams back before smashing her own glass on the table.

We’re overjoyed thinking about the Airbnb hosts seeing their property get damaged when they flip on the TV on Monday night.

• MAFS Australia is available in NZ on Three and ThreeNow.