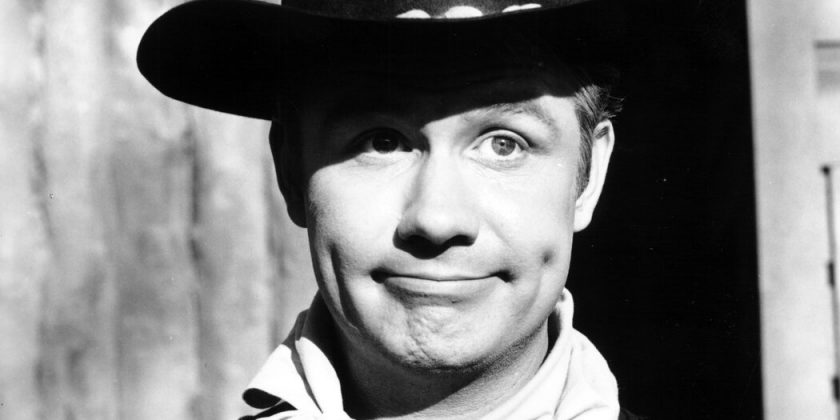 James Hampton, a character actor who achieved a measure of sitcom immortality with one of his earliest roles, the inept bugler Hannibal Dobbs in the 1960s series “F Troop,” died on Wednesday at his home in Trophy Club, Texas. He was 84.

Linda McAlister, his agent, said the cause was complications of Parkinson’s disease.

Mr. Hampton had a genial countenance well suited to comedic roles characterized by bumbling or gullibility. He had appeared in a handful of television shows, “Death Valley” and “Dr. Kildare” among them, when the director of a “Gunsmoke” episode he was in brought him to the attention of a Warner Bros. casting director. That led to the role on “F Troop,” a spunky ABC comedy about a military outpost, Fort Courage, in the 1860s.

The show starred Forrest Tucker, Larry Storch, Melody Patterson and Ken Berry, but Mr. Hampton made an indelible impression in his secondary role as a bugler whose playing bore only a passing resemblance to music. (In the show’s opening montage, an arrow makes a direct hit into the bell end of his horn as he’s playing.) The show ran for only two seasons, but its over-the-top humor in an era of milder comedies like “The Andy Griffith Show” endeared it to a certain segment of viewers.

Mr. Hampton was well known to a later generation from the 1985 movie “Teen Wolf,” in which he portrayed the father of the title character, a werewolf played by the emerging star Michael J. Fox. He was also in its sequel, “Teen Wolf Too,” which starred Jason Bateman, in 1987.

Mr. Hampton played more serious roles as well, including the power company public relations man who is showing Jane Fonda’s character around a nuclear power plant when disaster strikes in “The China Syndrome” (1979).

He occasionally directed, including episodes of the 1990s series “Hearts Afire,” whose cast included Billy Bob Thornton. When Mr. Thornton wrote his acclaimed film “Sling Blade” (1996), he made sure that there was a role in it for Mr. Hampton, as a hospital administrator.

Burt Reynolds was another important influence in his career. They met while working together on “Gunsmoke” when Mr. Reynolds was a regular cast member. The two appeared in the 1974 football movie “The Longest Yard,” and Mr. Hampton both wrote and directed episodes of Mr. Reynolds’s 1990s series, “Evening Shade.”

James Wade Hampton was born on July 9, 1936, in Oklahoma City. His father, Ivan, owned a dry cleaning business, and his mother, Edna (Gately) Hampton, worked at a millinery.

He grew up in Dallas and was a speech and drama major at North Texas State College (now the University of North Texas). He was drafted in the Army in 1959 and served in Europe. Returning to Texas in the early 1960s, he worked in regional theater before moving to New York in 1962.

Mr. Hampton worked steadily for the next four decades and landed occasional roles even after semi-retiring and settling back in Texas in 2002. He is survived by his wife, Mary Deese Hampton, whom he married in 2002; two sons, James and Frank; a daughter, Andrea Hampton Doyle; and three grandchildren.

After “F Troop,” Mr. Hampton returned to slapstick-in-uniform in the 1976 movie “Hawmps!” He played a mid-19th-century lieutenant tasked with overseeing an experiment in Texas that involved using camels in the cavalry. Mr. Hampton was a favorite of Johnny Carson in that period and was a frequent guest on his “Tonight Show,” including on the night of the Hollywood premiere of “Hawmps!”

As Mr. Hampton told the story to The Community Common of Portsmouth, Ohio, in 2007, he was Mr. Carson’s first guest so that he could leave early to get to the premiere. He happened to mention to Mr. Carson that his mother was in the studio audience. Mr. Carson brought up the house lights and congratulated her on her son’s big night.

His mother responded by saying: “You just go ahead to the premiere, James. I’m going to stay and watch the rest of Johnny.”