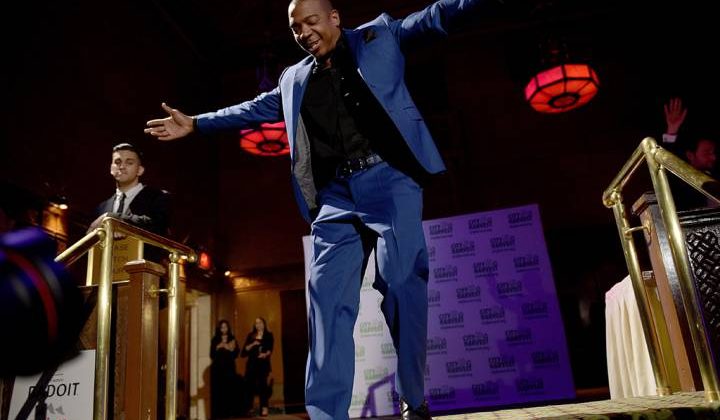 50 Cent (a.k.a. Curtis Jackson III) may be done with Ja Rule‘s (a.k.a. Jeffrey Atkins) antics once and for all.

Their longtime feud began almost two decades ago and as per modern tradition, the rappers spit fire at each other once more over the weekend with a variety of playful and childish exchanges in which Atkins called Jackson “trash.”

In an attempt to be a bigger and more responsible adult, Jackson decided to block Atkins on all forms of social media, allowing no further contact. Atkins instead took that as a surrender.

Saturday Night Live host Colin Jost fueled this week’s drama when he “reported” about their feud on the Weekend Read segment.

He referred to Jackson buying a number of Ja Rule concert tickets last month so that the seats would be empty. “Ironically, 200 tickets to a Ja Rule concert cost exactly 50 cents,” Jost joked.

Jackson shared the video with his Twitter followers. “LOL. What do I do now?” he wrote with a laughing emoji.

Atkins then took aim at Jackson’s box-office failure, All Things Fall Apart (2012), by posting a picture captioned “50 [Cent] thought he was winning an Oscar when he took this roll. S**t went straight to BET Blackbuster cinema.”

“Can someone tell me what time and day 50 Central comes back on? Asking for a friend,” he wrote, referring to Jackson’s cancelled 2017 BET series.

With no reply, the Always on Time rapper followed up on his prior tweet revealing that he had been blocked by Jackson. “Bwahaha 50 Cent blocked me,” he wrote. “He can dish it but can’t take it. Stop acting like everything he does is dope. He’s trash.”

In an Instagram comment, Jackson further insinuated that their beef will never end. “South Side rules apply, it’s never over,” he wrote. “We may take a break, but It ain’t over til one of us gone,” he concluded.

According to Atkins, Wednesday was his “last post about 50 Cent.” He referred to the 2018 midterm elections which took place on Tuesday.

“I wanna be serious for second and just say me and this man went back and forth yesterday like school kids, but not once did I see him use his platform of 20 million followers for anything uplifting,” he wrote.

“I’m sure he didn’t vote. [He] didn’t encourage anyone to vote. Only Tom-f**king-foolery; tearing down other people of colour.”

Hip-hop fans took to Twitter to express their love and thoughts on the never-ending drama.

Some users insinuated that the rappers secretly love each other and that their arguing is nothing but a publicity stunt.

Atkins’ concert in Arlington is still set to take place on Nov. 9 — the same show Jackson bought 200 tickets for.

Atkins dared him to go the extra mile and attend his meet-and-greet opp. “If you get a chance pull up for a meet and greet, I dare you,” he wrote in an Instagram post.

Will there ever be an amicable conclusion to this seemingly endless beef?