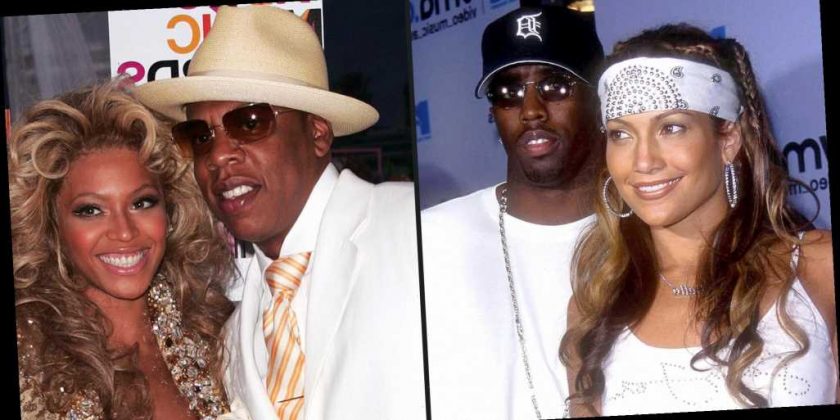 The MTV Video Music Awards may be intended to celebrate the best music videos of the year, but sometimes, the celebrity couples steal all of the attention. Us Weekly is looking back at the iconic duos who attended the show together — including some you may have forgotten about!

The VMAs are an important event for Beyoncé and Jay-Z. In 2004, they made their first red carpet appearance as a couple when the gathering was held in Miami. The “Run This Town” rapper wore a white suit and matching fedora, while the “Black Parade” singer arrived in an all-gold ensemble.

During Beyoncé’s acceptance speech for Best Female Video, she gave Jay-Z a shout out by saying: “What up, Jay?”

Justin Timberlake and Britney Spears, for their part, looked completely lovey-dovey during their 2000 VMAs arrival. The moment occurred one year before they wore their iconic matching denim look. Sadly, the megastars called it quits the following year in 2002.

While attending the 2014 VMAs, Katy Perry and Riff Raff recreated Timberlake and Spears’ outfits. Spears, in turn, gave the “Smile” singer the stamp of approval for her efforts.

“I did my best impression, hope u likey!” Perry tweeted at the time, to which Spears replied back, “Just when I thought the denim dress had retired …. you bring it back! You looked amazing tonight bb.”

Pamela Anderson has attended the VMAs with two of her ex-husbands: Tommy Lee in 1999 and Kid Rock in 2001. Sometime after both marriages concluded, the two music stars got into a fight at the 2007 ceremony.

“I actually left [before the fight happened],” Anderson said on The Ellen DeGeneres Show in September 2007. “As soon as I left, meow! They all went after each other.”

Days later, Rock claimed on KROQ-FM’s The Kevin & Bean Show that the tussle “had absolutely zero to do” with Anderson.

Scroll through the gallery below for a trip down memory lane.