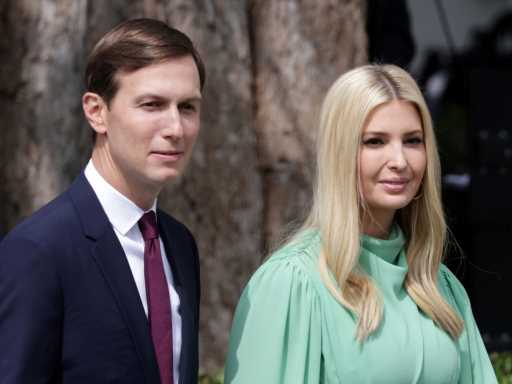 There were not many things during the Donald Trump administration that were kept quiet, but one new detail about his special adviser, and son-in-law, Jared Kushner is surprising just about everyone. Ivanka Trump’s husband is revealing in his upcoming book, Breaking History: A White House Memoir, that he was diagnosed with thyroid cancer in 2019.

The memoir, which will be out Aug. 23, shares that Kushner learned about his illness while on Air Force One en route to Texas. It was White House physician Sean Conley who delivered the bad news to him. “‘Your test results came back from Walter Reed,’ he said. ‘It looks like you have cancer. We need to schedule a surgery right away,’” per an excerpt obtained by The New York Times. Even though “early” detection was key to his diagnosis, Kushner still lost a “substantial part” of his thyroid and one of the possible side effects to his surgery was damage to his vocal cords.

He decided to keep his illness under wraps and only allowed several people in his inner circle to know about his cancer diagnosis. “This was a personal problem and not for public consumption,” Kushner wrote and noted that he didn’t even tell his father-in-law about his medical issue. He scheduled the surgery for the Friday before Thanksgiving in 2019 and yet, Donald Trump still found out about his son-in-law’s condition.

“The day before the surgery, Trump called me into the Oval Office and motioned for his team to close the door. ‘Are you nervous about the surgery?’ he asked,” the excerpt read.

“How do you know about it?” Kushner responded to Donald Trump.

“I’m the president,” his father-in-law said. “I know everything. I understand that you want to keep these things quiet. I like to keep things like this to myself as well. You’ll be just fine. Don’t worry about anything with work. We have everything covered here.”

It’s shocking that even the former president kept Kushner’s secret, especially when Donald Trump’s loose lips with the media are pretty well documented. Kushner was allowed to reveal the news on his own terms, when his health was back on track. This never-before-heard story sets his memoir up for a splashy debut next month which makes us wonder what other juicy details will be revealed.