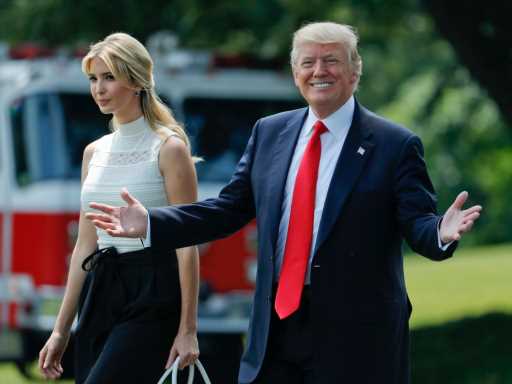 Donald Trump’s former chief of staff, Mark Meadows, has a new book out and it’s ruffling a few feathers in the former administration. The Chief’s Chief, published Dec. 7, shares insider information about the June 2020 racial justice protests and that infamous Bible photo with the former president in front of St. John’s Church in Washington, D.C. The glare of the spotlight is on daughter Ivanka Trump and how she reportedly came up with the PR stunt that went awry.

Meadows writes that Ivanka wanted to get support from the “people of faith” who followed the Trump administration because everyone in the White House grew concerned about the growing crowds around the historic building, per an excerpt from Religious News Service, via The Washington Post. With some damage already done to the structure, including a smashed window and a small fire in the basement, they decided to take action.

According to Meadows, Ivanka formulated a plan and suggested her father “give his address in the Rose Garden as planned, and then lead a group of his closest aides and advisors over to St. John’s Church, where he would deliver a short message to the American people.” Her objective, on paper, seemed to be an ideal way to handle the situation —  it would symbolize that “law and order would prevail” and align Trump voters by sending “a message to people of faith.” Meadows revealed that Donald “loved the idea” as he often listened to his daughter’s advice and staffers ran around the White House to find the perfect Bible for Donald to hold. (He picked one not based on its looks, but for “the way it felt in his hands.”)

With the Bible tucked in Ivanka’s purse, the group walked over to Lafayette Square after clergy and the protestors had been cleared out by tear gas, clubs, pepper spray, and riot shields, per a U.S. Department of Interior report on the incident. Although the photo-op was supposed to take place in the church after Donald said a prayer, the group reassembled outside the building once they realized St. John’s was boarded up for safety. And that’s when the Ivanka-generated moment occurred — Donald, looking stoic, posed for photographers while holding up the Bible in front of the church. For Meadows, he was “never prouder to be serving under President Trump” while many in religious circles criticized Donald for using the Bible for publicity. Some may see Ivanka’s moment as a failure, others as a success — but it will always be one of the most iconic moments in her father’s presidency.

Before you go, click here to see the biggest presidential scandals in US History.