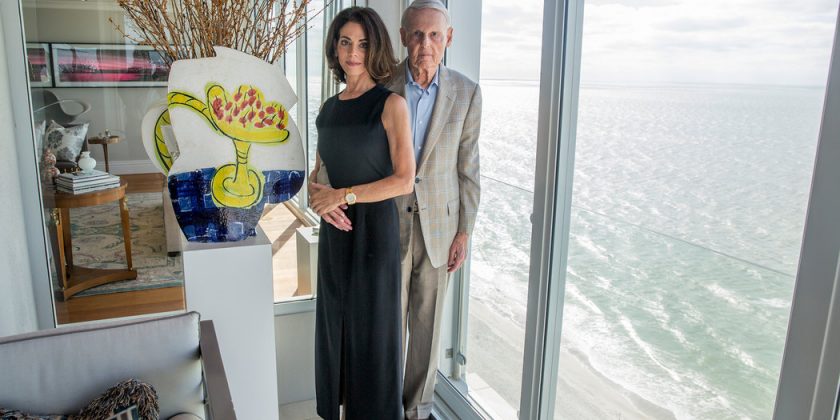 NAPLES, Fla. — When each member of a couple serves on a different museum board, and they divide their time among several houses, they are likely to have more than one art collection, too.

In the case of Gerald and Jody Lippes, their large and light-filled apartment here — with an expansive view of the Gulf of Mexico — encompasses gleaming Biedermeier furniture, African art made before World War II and some 130 works of contemporary art (a small portion of their total collection, which numbers more than 700 pieces.)

Within the latter category, this residence is more focused on established and midcareer artists; their house in southern Ontario features up-and-comers; in New York City, it’s all about midcentury Color Field abstractions.

Both hail from Buffalo, and Mr. Lippes came to art first. As a lawyer in that city in the early 1980s, he was approached by Seymour H. Knox Jr., a patron of the Albright-Knox Art Gallery, who asked him to be a trustee of the museum. Mr. Lippes accepted, with trepidation.

“Every board meeting, you had to choose the picture you liked best and then defend it,” said Mr. Lippes, who founded a law firm and then moved over to the private-equity world. “I knew nothing about art. So for the first year, I would try to copy somebody. And finally I started being more independent.” 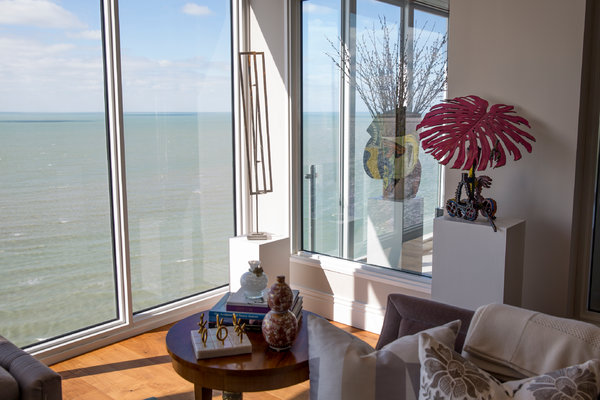 These days Mr. Lippes serves on the board of the Baker Museum, part of the Artis-Naples cultural campus here.

Now it is Ms. Lippes, 58, who is the Albright-Knox trustee in the family. They provide financial support for exhibitions at the Whitney Museum of American Art, including a current one, “Kevin Beasley: A view of a landscape,” which features an artist whose work they collect.

[Read more about Kevin Beasley and his exhibition at the Whitney.]

What ties the apartment’s artworks together, Ms. Lippes said, is “texture,” adding, “If I’m allowed to touch a work, I do. I touch everything.” Mickalene Thomas’s “Clarivel #1” (2015), encrusted with sequins and beads, certainly fits the bill as touchable, and the many other artists whose works are on hand include Liam Gillick, Kara Walker and Mary Corse.

They were preparing to say goodbye to “Mare” (2018), by the artist Nari Ward, which was about to be crated up to travel to New York for a show of his opening at the New Museum in February. “We like the aesthetic and the painstaking process it requires,” Mr. Lippes said, as well as the “cultural statement.” The work features perforations that refer to the breathing holes used by runaway slaves in hiding.

The couple recently talked about their collecting. These are edited excerpts from the conversation.

So buying art is something you do together?

And when you agree?

GERALD LIPPES If we like an artist, we collect the artist in depth. So when we started reading about Do Ho Suh and got to know him a little bit, we starting buying in depth. So we own five of his works, and I’m sure we’ll own more.

How do you get them?

MR. LIPPES We work at lot with the gallery Lehmann Maupin, and other dealers. We read the auction catalogs. I know auctions are fun, but you generally overpay, or you pay more than you wanted to pay.

Are fairs less prone to problems?

MR. LIPPES Well, if I buy at a fair something I hadn’t seen before and just saw at a fair, I’m generally surprised — but not happily. So we look at things at fairs, and if we can’t get them out of our minds, then we’ll call a dealer and buy it. Sometimes they’re gone, but there’s always more art.

I see you have two works by the sculptor and ceramist Betty Woodman, an artist I interviewed a couple of times.

MR. LIPPES We’re very blessed because most people don’t have any idea who Betty Woodman is. She’s one of the greats, and didn’t get enough recognition in her lifetime.

Though she did have a show at the Met.

MS. LIPPES At the time, our apartment was right across the street from the Met, and we ran over to see the show.

MR. LIPPES There was an older lady moving some of the work around. “I went up to her and I said, “Do you mind not touching the art? You really make me very nervous.” It turns out it was Betty Woodman. Me and my big mouth.

MS. LIPPES But it was just the three of us, and we got to chat with her.