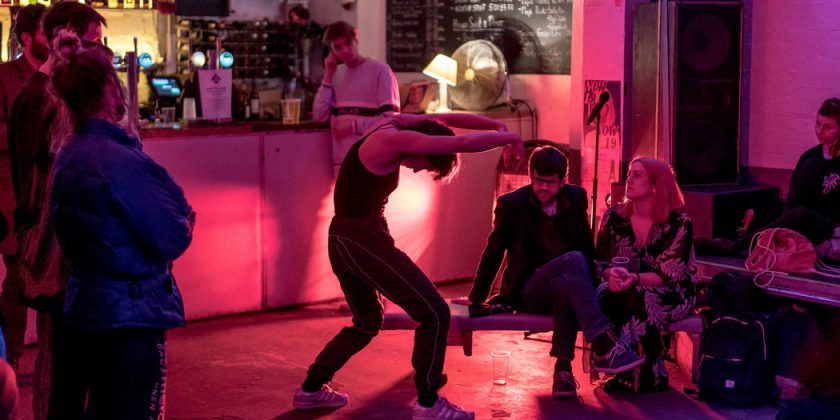 LONDON — The stage filled with women in Princess Diana masks, smashing VHS cassettes with hammers. A dancer wove her way through a bar, muttering about kittens. A figure wrapped in a filthy comforter emerged from a tent, crawling among clubbers dressed in fetish gear.

Welcome to The Yard: London’s only theater-slash-nightclub.

The Yard opened in 2011 in a warehouse in Hackney Wick — a district of East London that was once run-down but has recently gentrified. The theater venue, with a 110-seat, purpose-built auditorium inside a former warehouse, was meant to be temporary; eight years later, it still has a rough-and-ready feel, all recycled wood and corrugated roofing. Beyond staging some of London’s most avant-garde theater productions, there is a large bar that hosts club nights for as many as 250 people. 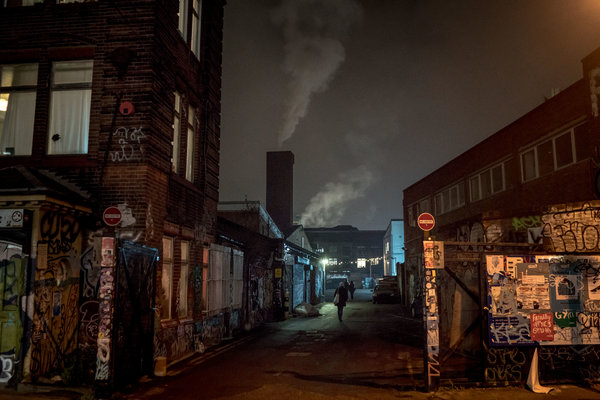 For five weeks each January and February, The Yard draws these two strands together in a festival called “NOW”: double bills in the theater, plus “Lates” each Thursday, where the bar is open afterward for drinks, D.J.s and live art performances.

The Yard’s artistic director, Jay Miller, 34, said the festival was “really the more radical end of our program,” made up of “innovating and risky” work.

So far, this year’s festival, which runs through Feb. 16, has featured “Diana is Dead” by F.K. Alexander — the aforementioned royal revenge fantasy — as well as an evening of contemporary dance: Jamila Johnson-Small, performing as Last Yearz Interesting Negro, and Rowdy S.S., a musician and performance artist, writhed across the stage in front of close-up video images of dreadlocks and nipples.

Highlights yet to come include a show by the performance artist Ira Brand about dominance and submission, and a playful monologue about time travel from the celebrated experimental theater company Forced Entertainment.

Everything The Yard does is underpinned by three values, Mr. Miller said. The first is that “the stories we tell have to feel like they aren’t being told by mainstream culture,” Mr. Miller said. “The second is we create a space where audiences and artists feel able to take risks together. The third is we really celebrate the idea of the live moment, and what that means in a society mediated by technology.”

This can result in work that feels modish, with recent shows about social media and selfie culture. But the Yard has also produced acclaimed productions driven by bold directorial choices — a relatively rare thing for new writing in British theaters, where the director is more often expected to invisibly “serve” the script.

The theater’s hip, edgy work attracts an unusually young crowd: 70 percent of the audience is under the age of 35, according to Mr. Miller. And it is breaking down the boundaries between watching a play, hanging out with a beer and raving till 6 a.m. “Audiences are cross-pollinating,” Mr. Miller said. “We’re creating a new theater audience, who see that it can be as invigorating as dancing in a club.”

Communicating the unusual dual nature of The Yard has proved tricky, he added.

Marlen Pflueger, a dance student who stuck around after a for a recent “Lates” offering, said she’d been to the Yard before for dance parties. “I didn’t know it was a theater,” she said, adding, “I think it’s such a good idea to have this combination of a club and performance space,” she said.

Although it receives about 150,000 pounds, or nearly $200,000, a year in government funding, Mr. Miller said that the Yard made more money from running its own parties and renting out the bar space for events than it did from the theater, where ticket prices never go above £20. Putting on plays and club nights can be “exhausting” he said, but doing so allows the Yard to stage the kind of work that other London theaters don’t.

Mr. Miller was drawn to Hackney Wick because it was cheap, he said. The Yard initially moved in for free. Warehouses were often broken into, and their owners were spending a lot on security, Mr. Miller said, adding, “Us being here meant there was less chance of that happening.”

Britain’s theaters are heavily reliant on government funding, but such money was cut drastically when the British government turned to austerity policies in 2010. Cash-strapped theaters took fewer risks in programming new work, Mr. Miller said. “It seemed like it was an easier choice to start a theater than get a show on at an existing theater.”

He founded The Yard in 2011 with just £9,000 and no idea how long he could keep it going. But additional money from the government and private donors allowed Mr. Miller to turn it into something permanent at a time when Hackney Wick was changing drastically.

The area’s revival began with construction for the 2012 Olympics, which were largely held in East London. Today, there are plenty of trendy bars, restaurants and clubs, as well as luxury apartment developments. Mr. Miller said the changes made him uneasy. “Artists go to places that are free, and then they’re not free for other people,” he said.

Ben Bishop, The Yard’s music and events coordinator, was hired in 2017, having run off-grid warehouse parties for years. He said that he had always liked to collaborate with performance artist friends, and that working at an arts venue like The Yard seemed like a good way to blend both worlds.

Mr. Bishop said he saw The Yard as playing an important role in supporting London’s subcultures, through nights such as Pride of Arabia, which defines itself as being for “queers from the Arab world,” or Murder on Zidane’s Floor, an event run by Goal Diggers, an East London soccer club for women and people who identify as nonbinary.

The recent narrative around London’s night life has been a largely pessimistic one, with many venues closing for good, and others facing soaring costs or the denial of licenses because of concerns about noise. Mr. Bishop said that if the city’s late-night culture is to thrive, rather than just survive, artists and late-night venues needed to collaborate. “We should be seeing more types of art and expression in clubs,” he said.

Such cross-pollination is rare in London. But The Yard is encouraging it, whether that’s getting techno clubbers to buy tickets for a play, or encouraging theatergoers to stick around for a late-night event.

It may be an unusual vision for the future of theater — but it’s happening right now at The Yard.