Footwork, the Chicago-born music-and-dance form, is famous for its speed. D.J.s deliver a tense, polyrhythmic mix of stuttering samples at the jacked-up rate of 160 beats per minute, and dancers meet the challenge with an onslaught of swivels, kicks and scissoring steps even more bewilderingly quick and intricate than the music.

This summer, that speed is finding a match in size. From Tuesday through Sept. 16, “Footnotes,” a short footwork film, is being projected across the 2.5-acre facade of the Merchandise Mart, a behemoth of a building covering two blocks of downtown Chicago. That’s a screen the size of about two football fields. Each night, the incredibly fast dance grows incredibly large.

It’s a boost in visibility for a style, developed by Black youth, that hasn’t always been welcome in the city’s center — a style that has become popular around the world but isn’t always given recognition and respect in its hometown.

“It’s about damn time,” said the footwork dancer Jamal Oliver, better known as Litebulb. “Footwork has been part of Chicago for 30 years.” 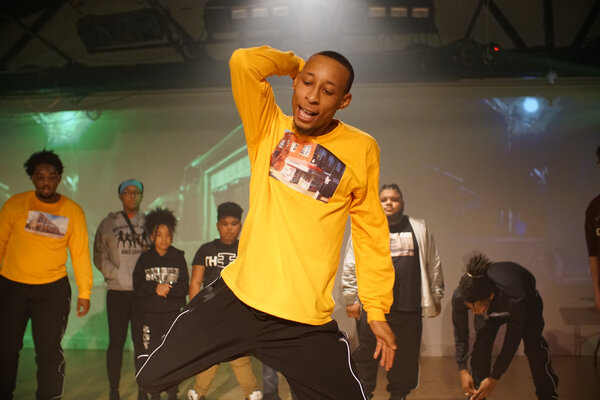 Litebulb, 31, who dances in the film and helped produce it, said that while appearing on the side of a building is exciting, “what’s more fulfilling is giving that opportunity to kids who would never get that chance.” Paying it forward is part of the mission of the Era Footwork Crew, a collective Litebulb helped found in 2014, and of its offshoot nonprofit organization, Open the Circle.

In footwork parlance, “opening the circle” means making a space for dancing when the floor is too packed. Open the Circle seeks to do something similar in the field of social justice, not just making spaces for dancing and dancers but also spreading knowledge through education and funneling resources like grant money into the communities that created footwork.

“When most people create these kinds of organizations, they’ve already made a fortune and now they want to give back,” Litebulb said. “But we’re doing it from the grass roots.”

By design, the work of the Era and Open the Circle blurs in footwork projects, including public “dance downs,” a summer camp (Circle Up), videos, rap singles, a touring show (“In the Wurkz”) and a feature-length documentary on the way (“Body of the City”). The collectives extend footwork into the world of art galleries, universities and music festivals without losing touch with where it came from.

“Footnotes” is an extension of these efforts, both an advertisement and an upshot. “We’ve been doing a lot of work with the City of Chicago,” said Wills Glasspiegel, the documentary filmmaker and scholar who made the film with the Era dancer and animator Brandon Calhoun. “The city has recognized us as a good partner.” (Glasspiegel and Litebulb are both founders of the Era and executive directors of Open the Circle.)

In this case, the Department of Cultural Affairs and Special Events reached out about its “Year of Chicago Music” project and a partnership with Art on theMart, which has been projecting public art on the building since 2018.

Glasspiegel jumped at the chance. “Footwork is emblematic of our city,” he said, “so we tried to make the film as Chicago as possible, expressing the city as we Chicagoans experience it.” The filmmakers brought in musicians with deep local roots: Angel Bat Dawid; Amal Hubert of Hypnotic Brass Ensemble; and the Chicago Bucket Boys, who, Glasspiegel said, “are the sound of Chicago’s streets.” Elisha Chandler, a dancer with “In the Wurkz,” sings.

But if the film’s musicians connect footwork to the city, its method of composition connects the musicians to footwork. To create the soundtrack, the Bucket Boys improvised at 160 beats per minute, then the others laid down improvisations in response, riffing on the blues song “Sweet Home, Chicago.” DJ Spinn, a seminal figure in the genre, took all those pieces and treated them as samples, turning them into footwork.

Using the music as a map, Glasspiegel edited together footage of the musicians with footage of dancers. The contribution of Calhoun, also known as Chief Manny, was crucial, too: transforming some of that footage into animation. It makes the dancing more legible.

That’s particularly important for “Footnotes,” since the Merchandise Mart presents a challenging surface for projection — the facade is perforated with hundreds of windows that may or may not be lighted. But the animation is useful in conveying footwork more generally. “Footwork moves so fast, it taunts the eye,” Glasspiegel said. Calhoun — with his dancer’s inside knowledge — clarifies its phrasing and shape.

At one point in the film, an animated DJ Spinn taps an MPC, the sampling device that is the main instrument of footwork music, and an animated dancer bounces on the keys. This image is important, Glasspiegel said, because it’s a metaphor. “That’s a driving theme for us — that footwork is both music and dance — which people might not know if they don’t know the history.”

Footwork developed in the late 1980s and early ’90s in dance clubs, community centers and roller-rink discos that played house music. Another important site was the Bud Billiken parade, one of the largest African American parades in the country and one of the oldest, happening every summer since 1929. In these places, foundational footwork moves, like the Holy Ghost (a slack-limbed shaking) and the Erk n Jerk (a sequence of seesawing, sideways kicks), emerged before footwork got its name.

Some of the top dance crews of those days — Main Attraction, House-O-Matics, U-Phi-U — included dancers who became D.J.s, most importantly RP Boo and DJ Rashad. And it was these dancers-turned-D.J.s who created the footwork sound, increasing the tempo and stripping things down to ratchet up the tension (or throw off rival dancers) in dance battles — intense, improvisational face-offs that became the core of footwork culture in the early 2000s. Overlapping rhythms gave dancers more options, and competition pushed innovation.

As had happened before with hip-hop — when M.C.s, who made money for the music industry, eclipsed b-boys, who didn’t — the music spread without the dance, especially abroad. “People didn’t really see the dance until DJ Rashad and DJ Spinn brought dancers on tour with them in 2010,” Litebulb said.

Litebulb was one of those dancers, discovering rapturous fans in Europe but finding less recognition back home. “Too often dancers are viewed as background or bodies, not artists,” he said. “It’s important to have the balance, celebrating what the DJs are doing and what the dancers are doing.”

“In battling culture, women were expected to stand on the side and look cute,” said Diamond Hardiman, a 27-year-old dancer who appears in the film. “You couldn’t get in the circle.”

Women of her generation began battling one another. “It was empowering, seeing what we could do with each other to make ourselves better and letting the guys know that us women can do the same thing that y’all doing.”

Women like Hardiman made space for themselves, but Open the Circle has also helped by reconnecting footwork with the youth dance groups in which it began. These groups are filled with girls and often run by women. (Women in the family of Shkunna Stewart, who directs the group Bringing Out Talent, have been running groups for four generations.)

Members of such groups are the core population of Open the Circle’s summer camps on the South and East Sides of Chicago, camps where women like Hardiman teach. Some of these children appear in “Footnotes.” A girl called Ladybug leaps like a grasshopper, a dozen stories tall.

The goal of the camps is broader than correcting the gender imbalance, though. “In our community, footwork is kind of viewed as nostalgia, but if we can get the kids, then footwork can live on,” Litebulb said. “It will be a whole new evolution than what we thought it was.”

And it’s about more than perpetuating a style. As some of the camp T-shirts attest, “Footwork saves lives.”

“It really did save my life,” Hardiman said, echoing the sentiment of other Era members. “I grew up seeing the stuff I wasn’t supposed to see at a young age, but footwork showed me I didn’t have to do those things.”

That aspiration can be felt in the film as well. “The big kicker for me is showing the kids anything’s possible,” Litebulb said. “Look at yourself on the side of a building now. Who would have thought?”