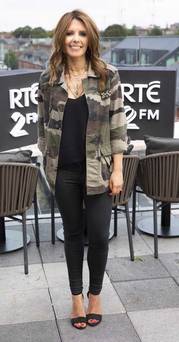 Jenny Greene has revealed the reasons behind her decision to depart 2FM earlier this year, and to return as part of the new schedule.

The 36-year-old DJ had been with 2FM since 2007, co-presenting The Nicky Byrne Show on the RTE youth station for the past five years.

She also presents the hugely popular Electric Disco on Saturday evenings and performs at events with the RTE Concert Orchestra.

However, as part of the new schedule shake-up necessitated by the departure of Byrne to tour with Westlife, Jenny was offered a new evening show. Speaking to Independent.ie at the unveiling of 2FM’s new shows and presenters at The Devlin Hotel in Dublin on Thursday, Jenny explained why she turned down the evening slot.

“My reason was simple and it was that I already worked Saturday nights – I DJ around the country – so if I was working Sunday to Thursday night till late I would actually never be at home,” she said.

“Or I would be [home] during the day on my own, and it was more the impact that would have on my life than anything else.

“It was never a case of feeling that I was too good to be on evenings.  I never felt that either.  It just didn’t suit the rest of my life, and that made it easier for me to make the decision I did.” Jenny, who is married to Kelly Keogh, said there was “no row” with Head of 2FM and Radio Strategy Dan Healy over the situation.

“It was actually worse.  Sometimes it’s easier if you have a screaming row with someone but it’s harder when you’re both actually upset and you’re like, ‘I’m sorry it’s come to this’.

“I understood the situation he was in.  He understood where I was.  And I said, ‘Look, obviously we’ll have to part ways’.”

There was a huge outpouring of support from friends, colleagues, and fans on social media following Jenny’s announcement, which she says she was not expecting and felt was “overly kind”.

“People normally only say those things when you’re dead so it was weird sitting at home reading them.  It was definitely very nice and lovely of people to take the time to do that,” she said. Suddenly being without a full time job was “weird”, although Jenny would continue to perform with the RTE Concert Orchestra and partake in other work outside of RTE.

“I’ve worked on the radio full time since I was 17 so that’s 20 years and then to suddenly not be doing that was really weird,” she said.

“I probably took a week or two at home and thought about what I was going to do, what was going to be my next move.

“I’ve been DJing and doing various things since then so I’ve probably ended up being busier out of work than when I was in there.  It’s nice to have the time and the space to do that and go back.”

Jenny revealed that she felt fine with her decision but her wife Kelly was concerned about the future.

“I was like, ‘We’ll be grand’.  I’ve always worked outside of work so I said, ‘We’re not going to be on the breadline, there’ll still be food in the evenings!'” laughed Jenny.

Six weeks after Jenny left 2FM it was announced that she would return as part of the new daytime schedule, with her own daily drive time show from 3pm to 6pm, kicking off on June 10.

“I didn’t care what time it was as long as it was during the day, that I would still have somewhat of a life outside of it,” she said.

“I’ve done those shifts for years and I felt like I can’t go back there.  My life was very different when I did them.”

The unveiling of the new shows comes on the eve of the 40th anniversary of 2FM.

They will role out over the coming weeks, with Doireann Garrihy joining Eoghan McDermott for 2FM Breakfast with Doireann and Eoghan from 6am to 9am, followed by Jennifer Zamparelli’s new talk show from 9am to 12 noon.

Tracy Clifford will take to the airwaves from 12 noon to 3pm when Jenny takes over ahead of Game On at 6pm and it has been revealed that Tara Stewart will host her own evening show from 7pm to 10pm.

Lottie Ryan will continue to work as entertainment reporter across late mornings and afternoons.