Just five months after Tish Cyrus filed for divorce from him, Billy Ray Cyrus seems to have found someone to mend his achy breaky heart and to possibly have and hold it from this day forward.

In a photo posted by Cyrus’s new girlfriend, Australian country crooner Firerose, the singer is seen posing in front of a watermill on Nashville’s Music Row, and she’s wearing what looks like a white gold diamond ring on the finger. Although you really have to zero in on her hands in the photo, it’s clear to anyone looking for it — as fans of the Cyruses clearly were — that Firerose looks like she’s wearing an engagement ring.

She captioned the photo “Taking in the moment…,” giving Cyrus photo credit, and we can’t help but wonder if “the moment” has something to do with her new southern boyfriend popping a certain special question.

Neither Cyrus or Firerose have commented on the engagement speculation, but the former did share a series of photos in which the Australian native is seen wearing the very same ring on the very same finger. “Birds of a feather,” he captioned the carousel.

The country music legend started dating the up-and-coming singer after collaborating with her on “New Day” last year. Firerose first shared a photo on her Instagram with Cyrus in mid-July, and Cyrus followed suit in late August. While it’s not clear exactly how long the two have been dating, they’ve shared plenty of glimpses of their life together on social media in the months following Tish Cyrus’s divorce filing.

The May divorce filing is by no means Tish and Billy Ray’s first foray into a legal parting. Billy Ray filed for divorce from Tish in 2010 after speculation that she had a fling with Poison’s Brett Michaels. The petition was dropped a few months later, and all seemed well between the couple until three years later, Tish filed for divorce from Billy Ray. The pair reconciled in a speedy 10 days and seemed solid until Tish’s second filing this year. 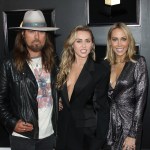 Tish cited “irreconcilable differences” as the reason for her most recent filing, which comes after 29 years of marriage with Billy Ray. Although she filed just a few months ago, she revealed the two have not lived together since February 2020, right before the coronavirus pandemic.

Tish and Billy Ray made a joint statement about their separation, telling People, “It is after thirty years, five amazing children and a lifetime of memories, we have decided to go our separate ways – not with sadness, but with love in our hearts. We have grown up together, raised a family we can be so proud of, and it is now time to create our own paths.”

The statement continued, “We will always be family and look forward to a continued and loving shared experience as friends and parents. We have not come to this decision lightly or quickly but with so much going on in the world, we wanted to provide some clarity and closure, so we can remain focused on what is important.”

Their five children are daughters Brandi, 35, Miley, 29, and Noah, 22, and sons Trace, 33, and Braison, 28, who have publicly remained quiet about their parent’s divorce.

Before you go, click here to see celebrity exes who will always be friends.