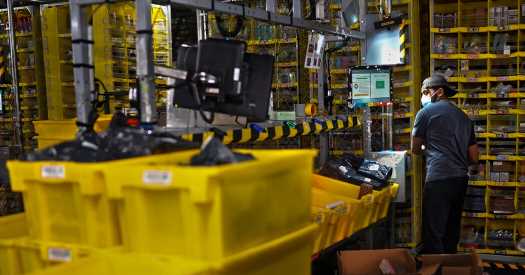 Last summer, amid a hiring spree at Amazon so gigantic it left historians struggling for comparisons, Karen Weise, a Times reporter who covers the company from Seattle, brought up a puzzling question to her editors. Approaching the million-worker mark, Amazon was on track to becoming the largest private employer in the United States. Yet, in spite of solid wages and generous benefits, it was quickly cycling through employees. Why?

Executives had an “almost palpable fear of running out of workers,” she said later.

In August, she got a call from Jodi Kantor, a Times reporter in Brooklyn who was talking to workers from a variety of industries who were struggling with strict rules about time and attendance during the pandemic. She wanted to look more closely at “time off task,” or T.O.T., Amazon’s practice of monitoring workers by the second and disciplining them for too many unexcused pauses.

One hot day in a New York City park, Ms. Kantor met with Dayana Santos, an employee who had been repeatedly praised by her bosses but fired for too much T.O.T. during one bad day filled with mishaps she said were beyond her control. Ms. Santos’s story raised fairness questions, and a business one: Why would Amazon, voracious for workers, fire a good employee?

Those questions led to a recent Times investigative report on the company that revealed systemic problems in its model for managing workers, such as unbridled turnover, minimal human contact, an error-plagued leave system, delayed benefits and mistaken firings.

Ms. Santos had worked at JFK8 on Staten Island, a compelling setting for a potential investigation: the only Amazon fulfillment center in the nation’s largest city, operating under maximum pandemic pressure to deliver to homebound customers. Other media outlets had examined working conditions, injury rates and numerous other aspects of Amazon warehouses. The Times reporters, focusing on JFK8, had a different goal: to understand the connection between the company’s employment model and its astonishing success. They set out to chronicle Amazon’s core relationship with its humongous, growing work force — who got hired and fired, and the rules, systems and assumptions that governed everything in between.

But JFK8 was vast — about 5,000 employees in a space the size of 15 football fields — and managers and human resources workers were reluctant to talk. Ms. Weise contacted corporate employees, many of whom never responded. To help tackle the huge project, Grace Ashford, a researcher on the Investigations desk, joined the team. Together she and Ms. Kantor spent many hours on the phone and at the bus stop outside JFK8, including on Prime Day, asking workers about their experiences.

Often, Ms. Kantor and Ms. Ashford found that new hires were grateful for the pay but left after a few weeks. “Amazon was a lifeline for them, until it wasn’t,” Ms. Ashford said.

Knowing that their requests to interview Amazon’s most senior executives were long shots, the reporters had to find creative ways of understanding the culture inside JFK8. They spoke with human resources staff and corporate leaders, who described Amazon’s glitchy, strained systems and the business challenge of maintaining staff during a public health emergency.

Ms. Weise took masked walks with Paul Stroup, a data scientist who had tried to steer Amazon through the crisis but left thinking Amazon could do better by its workers. Ms. Kantor spent the fall shadowing Ann Castillo, who was struggling with Amazon’s treatment of her severely ill husband, a JFK8 veteran.

Back office employees at a different location, in Costa Rica, described the partial collapse of the company’s leave systems early in the pandemic, leading to problems like halted benefits for Mr. Castillo.

After Ms. Santos, the worker fired for T.O.T., applied for unemployment, Amazon contested her benefits. In an obscure New York administrative court, the company filed internal policy memos that provided a rare inside glimpse of the T.O.T. system.

After almost 200 interviews, a picture emerged of a company that “seemed far more precise with packages than people,” Ms. Kantor said. Amazon had tried to grow its business quickly by creating a giant semi-automated machine for hiring and managing — but that system often stumbled.

Ms. Weise was able to confirm that while the company boasted of job creation, turnover at the warehouses was roughly 150 percent a year — a figure never reported before — meaning Amazon had to replace the equivalent of its entire warehouse work force every eight months.

That number, and the entire project, took on deeper meaning when David Niekerk, the architect of Amazon’s warehouse human resources system, told her the turnover was more or less by design. Jeff Bezos, Amazon’s founder and chief executive, had sought to avoid an entrenched work force, fearing laziness and a “march to mediocrity.” So upward mobility and raises for warehouse workers were limited.

As Ms. Kantor wrote and Ms. Ashford continued to report, Ms. Weise led a delicate, six-week effort to confirm the voluminous information in the story with Amazon and garner its responses. By then, the company had provided some input, including a tour of JFK8 by the general manager and an interview with Ofori Agboka, head of human resources for the warehouses, who defended Amazon but acknowledged that the company had leaned too heavily on technology and self-service.

As part of the fact-checking process, the reporters repeatedly asked Amazon about the T.O.T. policy and Ms. Santos’s firing. Shortly before the article was published, Amazon announced an immediate policy change: No longer could someone be fired for one bad day. Ms. Santos and others were eligible for rehire.

The article elicited a strong public reaction, tips from other employees who want to tell their stories and an outpouring of reader comments. (“It was not Bezos who made Amazon. It was all of us who bought from it,” one said.) On July 1, Amazon announced an addition to its leadership principles — critical guidelines for internal decisions and management — that focused on being a better employer.

In coming months, the focus is likely to be on whether Amazon will change some of the practices that have propelled it to dominance, either because of internal action or outside force.

“They say that broadly, their work force is happy, and their internal surveys say that more than 90 percent would recommend working at Amazon to a friend,” Ms. Weise said.

“But 150 percent turnover in a year means that something isn’t working for many people.”