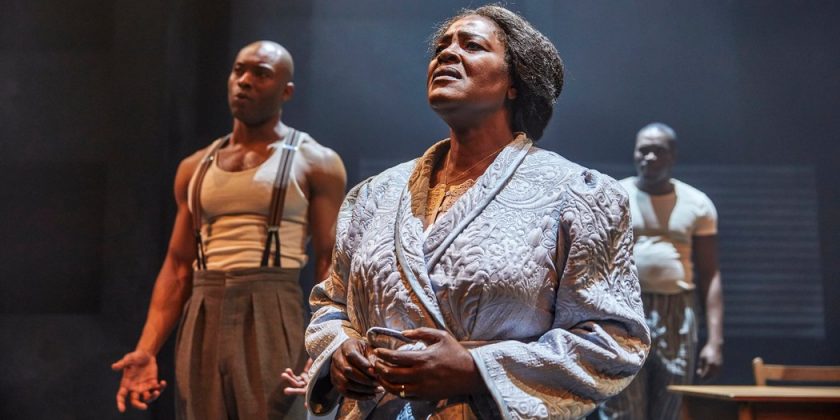 LONDON — This city’s season-long love affair with Arthur Miller reaches an intriguing if emotionally muted conclusion with “Death of a Salesman,” the 1949 Pulitzer Prize winner running at the Young Vic through July 13. The same author’s “All My Sons” can be seen just minutes away at the Old Vic through June 8, and barely has a week passed this year without one Miller title or another on view somewhere in London.

The difference this time around is that the Loman family is black, thereby allowing a top-rank set of actors access to roles in which they wouldn’t usually be cast. As you watch the American actor Wendell Pierce (from “The Wire”) bring a wounded dignity to the hapless Willy Loman, you can only applaud the marriage of performer and part. It’s equally exciting to see this year’s mighty Olivier Award-winning best actress in a musical, Sharon D. Clarke, shifting into a quieter gear to play the eternally loving Linda Loman. (Their older son, Biff, is played by the fast-rising Arinzé Kene, who scored two Olivier nominations this year for his play “Misty.”)

Making the Lomans black changes the dynamics — several other cast members are white, as are the play’s two directors, Marianne Elliott (a two-time Tony winner) and Miranda Cromwell — and it may seem curious that the issue of race isn’t directly explored. The obvious reason is that such discussions don’t feature in Miller’s text. But the script makes much of Willy’s desire to be liked, and you can’t help but wonder whether an African-American man in post-World War II Brooklyn wouldn’t worry more about being accepted.

There’s a telling, if fleeting, moment when a white waiter looks judgmentally at Willy, but race here remains the elephant in the room: Laudable in its embrace of talent across the board, the production, you feel, could dig a bit deeper still. 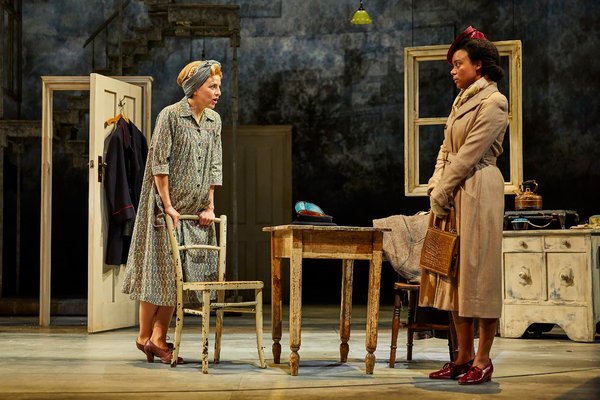 Issues of race and racism, on the other hand, are central to “Small Island,” Helen Edmundson’s dramatization of the 2004 Andrea Levy novel, which makes for a bustling evening at the National Theater. The play, directed with brio by the National’s artistic director, Rufus Norris, and running in repertory through Aug. 10 (and set to be shown in movie theaters around the world via National Theater Live on June 27), has acquired added poignancy after Levy’s death in February at age 62.

The topic here is assimilation, or not, as experienced by the generation of Caribbean immigrants who settled in Britain after World War II. Beginning in the midst of a Jamaican hurricane, the production chronicles the personal and political tempests that ensue once these travelers arrive in a new country that is far from the promised land they hoped for.

A multistrand narrative focuses on two women, one black, the other white, beautifully played by Leah Harvey and Aisling Loftus, respectively. Hortense (Ms. Harvey) is a prim teacher who leaves the “small island” of Jamaica to start a new life in a west London boardinghouse run by the widowed Queenie (Ms. Loftus).

Hortense’s tiny London studio may not match the vast expanse of air and sky she has left behind, but more troubling are the attitudes of those English people who don’t know what to make of these new arrivals from overseas. Queenie proves an exception to the prevailing narrow-mindedness, but her husband, Bernard (Andrew Rothney), is the embodiment of the very meanspiritedness that Queenie cannot abide. (Prone to expressions like “not on your nelly,” Queenie could well be a figure out of British music hall.)

All but stealing the production from its two first-rate leading women is Gershwyn Eustache Jr. as Gilbert, Hortense’s husband, who has arrived in London first and prepared to receive his wife into their new home. Gilbert is a good man doing his best to make his way in a racist community, and Mr. Eustache movingly communicates someone at ease with such London eccentricities as fish and chips but not with the obstacles that await him, a postal worker who dreams of becoming a lawyer. (Nor is it easy for him and Hortense to start a family in their cramped room with its single bed.)

Sweeping when needed but also touchingly intimate, the production deploys the full resources of the National, from its large cast (30 in all) to a flexible design by Katrina Lindsay that traverses continents and climates to tell a rending story of displacement that finds goodness where other such tales would merely come to grief.

Colorism, not racism, is the theme of “White Pearl,” the feisty if slight play at the Royal Court through June 15, or so its author said during a lively post-show question-and-answer session after a recent performance. Directed by Nana Dakin and running 90 minutes straight, this dark comedy focused on an expansion-minded Singapore cosmetics firm is the London debut of Anchuli Felicia King, a 25-year-old Thai-Australian playwright who lives in New York.

The ethnicities of the play’s characters include South Korean, Japanese, Chinese, Indian-Singaporean and Thai-American. (The only male character, Arty Froushan’s charismatic if cunning Marcel, is French.) Six women do battle over an online advertisement for a “white pearl” skin lightening cream, whose provocative content is nothing compared with the jockeying for position and status among the characters, all arguing about who is the most “woke.” (The contentious ad depicts a vengeful Chinese woman whose skin the cream turns black.)

Staged on a soulless high-tech set by Moi Tran, “White Pearl” is less interested in touching the heart than in taking satirical jabs that sometimes struggle to hit their mark. But if the writing on occasion seems, well, only skin-deep, Ms. King may leave some in her audiences pausing the next time they hit the makeup counter.