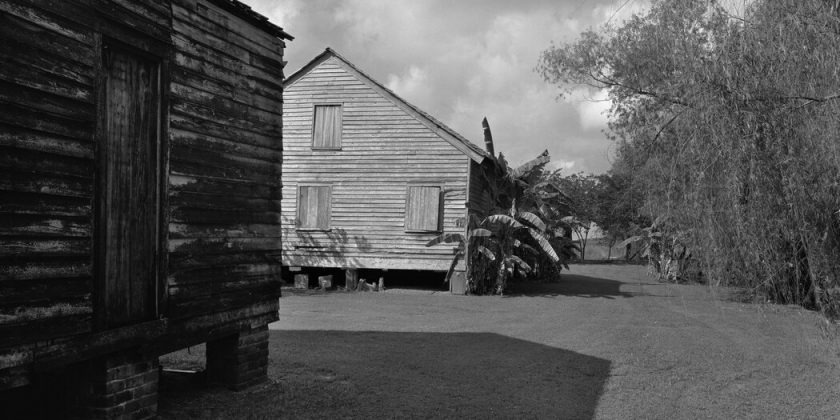 In each installment of The Artists, T highlights a recent or little-seen work by a Black artist, along with a few words from that artist putting the work in context. This week, we’re looking at a photograph by Dawoud Bey, whose latest exhibition, “In This Here Place,” opened at Sean Kelly Gallery in New York on Sept. 10.

Where and when did you make this work? The works in this series were made in 2019 in the communities of Edgard, Destrehan, Vacherie and Wallace, in Louisiana. I’d been spending a lot of time in New Orleans doing research and decided to start looking into Louisiana’s relationship to the institution of slavery, which brought me to the five plantations that I ended up photographing on and around.

Can you describe what is going on in the work? The photograph visualizes the now silent and unpopulated landscape of what was once 350 plantations along the west banks of the Mississippi River. I was looking to turn the image of these slave cabins — the relationship of the cabins to the landscape, and the way that the shadow in the photograph becomes another form that echoes the form and the shape of the cabins themselves — into a resonant and dynamic formal representation. So I’m looking to relate form to the narrative of place. I guess that’s the best answer: It’s about relating form to the narrative of place, and creating an interesting form through which to talk about that narrative.

What inspired you to make it? These photographs were inspired by a desire to examine aspects of African American history and to bring that history into a contemporary conversation; to provoke a reconsideration of that history through an act of radical Black imagination. For me, making photographs containing the landscape of slavery, the landscape of the dehumanization of Black bodies, has real urgency in explaining circumstances that exist in our time. If you think about George Floyd, and the question of how someone can kill a Black man in broad daylight in the middle of the street, and have no compunctions or reservations about it … well, the answer lies in the plantation, in that fundamental way of thinking of Black people as less than worthy of the kind of compassion that all human beings are entitled to. For me, there’s a straight line that can be drawn from the plantation to George Floyd; the plantation explains George Floyd. Of course, the other part of the plantation narrative is that in spite of that dehumanization, through their own will, through their own powerful spirit, through their own profound self-determination, Black folks have persevered, prevailed and excelled in ways that prove that the project of the plantations indeed was not successful.

What’s the work of art in any medium that changed your life? The work of art that changed my life was the album “A Love Supreme” [1965] by the saxophonist John Coltrane. The emotional power, musical rigor and the principled way Coltrane spoke about that music gave me a sense that music — or art — could be rigorously made and have a moral dimension. I believe that work just doesn’t exist inside of the bubble of the art world; I want it to exist within the world as we live in it. Coltrane always said he wanted his work to be a force for good. I see it as a kind of moral responsibility to engage with some of the difficult aspects of the world, to make work that matters beyond its own material and formal existence and to make work that provokes questions.